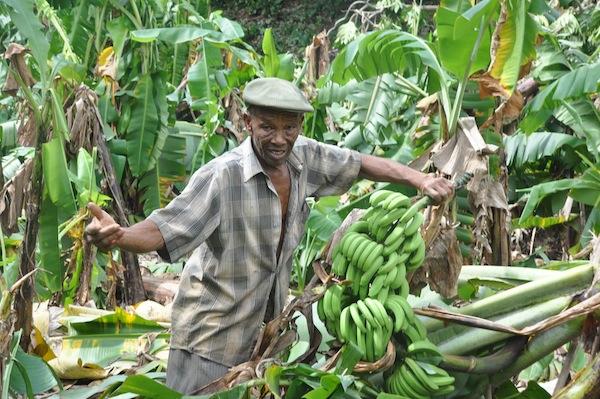 A farmer in his banana field, which was destroyed by a tropical storm. Credit: Desmond Brown/IPS

CASTRIES, St. Lucia, Jun 15 2013 (IPS) - The Caribbean has the unenviable reputation as one of the most disaster-prone regions in the world, a situation exacerbated by climate change and vulnerability that experts warn could have significant economic consequences if unaddressed.

As a result, a comprehensive strategy to build Caribbean resilience ought to include adaptation to the effects of climate change, Warren Smith, president of the Barbados-based Caribbean Development Bank (CDB), the region’s premier lending institution, has suggested.

Calling the Caribbean “the most vulnerable region in the world to natural hazards”, Smith said that “a growth strategy, in the context of the Caribbean reality, will be found wanting if it does not address resilience in all of its manifestations”.

Natural hazards “have been increasing in intensity and adversely impacting the region’s economic growth”, he added while addressing the bank’s governors recently, citing a recent International Monetary Fund (IMF) report which found that in the past 60 years, Caribbean countries have been hit with 187 natural disasters, primarily cyclones and floods.

"[The Caribbean is] the most vulnerable region in the world to natural hazards."
-- Warren Smith

The report estimated the annual economic cost of damage from natural hazards at one percent of gross domestic product (GDP) – a considerable drag on economic growth and a central factor in debt accumulation.

“In the face of these daunting statistics, the IMF has suggested that small island developing states in the Caribbean should be seen as frontline states for climate change funding,” Smith said.

“Growth prospects for our most vulnerable countries will be enhanced if resources for climate resilience can be front-loaded as part of a more comprehensive adjustment package,” he added. “Climate adaptation interventions should be fast-tracked and targeted at the most vulnerable economic sectors, primarily tourism and agriculture.”

St. Lucia’s prime minister, Kenny Anthony, told IPS the CDB had shown keen interest in providing assistance to the region on the issue of climate change. Together with the European Investment Bank, the CDB was refining projects to be funded under a 65-million-dollar Climate Action Line of Credit (CALC).

“This credit line provides an opportunity for low-cost financing for projects aimed at building resilience against climate change,” he described. “The region should…embrace this opportunity and make every effort to use these resources to help deal with reducing greenhouse gas emissions, land degradation and dwindling water supplies,” he told IPS.

Six of these countries rank in the top 10 most disaster-prone countries in the world in terms of disasters per land area or population. The rest of the Caribbean is not far behind, with all the countries among the top 50 hot spots.

The CDB president said “bitter experience” has taught the region that even the most carefully crafted fiscal adjustment programme can be quickly derailed by a major climate event, adding that adequate insurance coverage could be an efficient way of transferring some of this risk.

He cited the Caribbean Catastrophe Risk Insurance Facility (CCRIF) as “an excellent vehicle for this purpose” but said the challenge is that a borrowing member country (BMC) of the CDB, going through acute fiscal adjustment, would be unlikely to purchase adequate insurance coverage.

“The CCRIF estimates that, based on current levels of coverage purchased by Antigua and Barbuda, Jamaica, and St. Kitts and Nevis, the CCRIF payouts for Hurricanes Georges and Gilbert, would have been a mere one to two percent of total national losses,” he said.

“The prevailing view in sections of the donor community is that countries in fiscal and debt distress should front-load their reforms. This notion should be broadened to include the front-loading of climate resilience support,” he added.

Smith noted the CCRIF is ideally placed to provide two practical forms of such support to Caribbean countries, adding that donor assistance could be provided to these countries to increase the level of their catastrophic insurance cover to a more acceptable level.

The CCRIF recently request a new injection of donations to help make flood insurance more affordable, he pointed out, a move that “would open up yet another window for transferring some of the risk associated with flooding, which is now an almost annual event in the Caribbean”.

The costs associated with the frequent recurrence of natural disasters in the region are high. Since the early 1960s, the Caribbean has experienced average losses equivalent to almost one percent of GDP in damages each year, and such economic costs are on the rise. Losses have risen from .9 percent of GDP per year in the 1980s and 1990s to 1.3 per cent of GDP in the 2000s.

Natural disasters have also taken the lives of 1,345 people over the past 60 years, though they have by no means defeated Caribbean countries.

Guyana, often dubbed the breadbasket of the Caribbean, says it is pioneering an aggressive approach to accelerating economic diversification and building greater resilience, with significant returns emerging from these efforts.

“Gone are the days when our heavy dependence on the traditional products, sugar, rice and bauxite, left our economic fortunes to the vagaries and vicissitudes of these industries,” Ashni Singh, Guyana’s finance minister, told IPS.

He also pointed to “aggressive efforts at migrating from dependence on fossil fuels to reliance on hydropower to meet the needs of our national electricity grid”, with increased generation capacity and improved reliability and affordability.