BANGKOK, May 22 2008 (IPS) - When researchers surveyed the battered coastlines of Asian countries after the December 2004 tsunami, they stumbled upon an arresting fact – that mangroves can save lives. 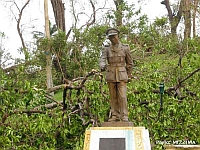 The Burmese military ordered the clearing of mangroves to make way for paddies. Credit: Mizzima News

In Sri Lanka, for instance, one village on the flattened coast revealed a tale that contrasted with the death and destruction all around. Kapuhenwala’s dense mangroves protected its residents and only two deaths occurred there when the South Asian nation accounted for 35,000 of the 220,000 tsunami-related fatalities across 12 Indian Ocean countries.

The value of mangroves now haunts Burma which was hit by Cyclone Nargis in the early hours of May 3, resulting in the deaths of over 100,000 people and affecting 2.5 million others. On that night, the storm, with wind speeds of up to 190 km per hour, churned up a sea wall that rose 3.5 m and swept 40 km inland on the flat terrain of the Irrawaddy Delta.

Burma’s populous delta region stood exposed to the storm surge due to the drastic reduction of its mangrove cover over many decades. During the 75-year period from 1924 to 1999, 82.76 percent of the mangroves in the Irrawaddy Delta was ‘’depleted,’’ states a study by the Forest Resources Environmental Development and Conservation Association, a Burma-based non-governmental organisation (NGO).

According to the United Nations’ Food and Agriculture Organisation (FAO), the mangrove area in the delta is ‘’now less than half the size it was in 1975 or just over 100,000 hectares.’’ The annual mangrove deforestation is ‘’the highest in Burma,’’ at one percent, of seven tsunami-affected countries surveyed, adds a report in a recent issue of the ‘Journal of Biography’.

‘’The destruction of mangroves in the Irrawaddy Delta has definitely been a contributing factor to the devastation suffered by people living in the delta,’’ Jeffrey McNeely, chief scientist for the International Conservation Union (IUCN), told IPS. ‘’The mangroves by themselves would not have been sufficient to stop all of the damage, but they certainly would have helped minimise the impacts.’’

Mangroves that are intact ‘’help to slow down the pressure of the waves. But their absence helps the water to move in swiftly, exposing the communities living close to the shore,’’ said Simmathiri Appanah of FAO’s Asia-Pacific regional office. ‘’The impact of the tsunami confirmed this in Sri Lanka, Thailand and Aceh, in Indonesia,’’ he told IPS during an interview.

The reasons behind the delta’s loss of mangroves are rooted in a quest for food over environmental concerns. Burma’s oppressive military regime led the way in the rapid destruction of the mangrove forests to open more land for rice fields and, later, shrimp and fish farms. An impoverished local population, desperate for food, readily obliged.

‘’Shrimp farming was one of a number of factors but not the major cause of mangrove loss,’’ says Jim Enright, Asia coordinator for the Mangrove Action Project (MAP), a Washington D.C.-based environmental lobby. ‘’Rice production was by far the largest single cause, and then cutting mangroves for building material and fuel wood for cooking were major reasons in recent times.’’

‘’Rice cultivation started way back under British colonial rule, but greatly expanded in the mid- to late-1980s by the regional commanders,’’ he added in an interview. ‘’The delta has lost 85 percent of its mangroves primarily due to rice cultivation.’’

The local military commanders targeted the mangroves in other ways, too, to strengthen army’s presence in the delta. ‘’The villagers were ordered to cut the mangroves for firewood to make bricks to build the army camps in the area,’’ says Khaing Dhu Wan, executive director of the Network for Environment and Economic Development (NEED), an NGO formed by environmentalists from Burma. ‘’Every military camp requires about 300,000 bricks each year.’’

Such a demand for wood from the mangroves increased after the 1990s, when more camps of the light infantry division and light infantry brigade were set up in the area, he revealed in an interview. ‘’There are at least 60 camps in the Irrawaddy delta now.’’

Consequently, attempts by NEED to educate the local communities of the high cost they may pay if a cyclone strikes their mangrove-depleted terrain was viewed as a threat by the regime. ‘’The military government does not allow any awareness raising,’’ Khaing added. ‘’We had to be very careful in training local people.’’

Moreover, even in regional or international settings the destruction of the delta’s mangroves rarely captured attention as other environmental issues in Burma did, such as illegal logging in the country’s north-east or the construction of mega hydropower dams.

‘’It was not given much attention outside of Burma because few persons travelled there to see the situation or write about it,’’ says Enright of MAP. ‘’No foreign groups are working there on the ground.’’

‘’Much of the Irrawaddy Delta is a restricted zone and requires permits for foreigners to travel,’’ Enright adds. Even after the tsunami (which also hit Burma) there was very little information available about what had occurred.’’