COPENHAGEN, Dec 11 2009 (IPS) - One of the key components of global action on climate change will be measures to adapt to changes that are already unavoidable. The Global Gender and Climate Alliance argues that specific attention be paid to the needs of women. 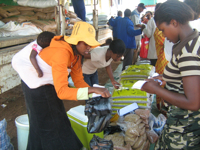 “With climate change taking away their source of livelihood because of the erratic weather patterns preventing them from farming, women must find another means of making a living,” said Rachel Harris, the media coordinator for GGCA.

Women make up a majority of smallholder farmers in Africa and in other developing countries. In contrast to the options open to many men, few women can respond to drought, for example, by relocating to cities or other rural areas in search of work. Women are often tied down by the need to care for children, or social obstacles to mobility; they are also frequently without even the smallest cash savings of their own or assets to sell to bridge hard times.

Cooke’s employer, IFAD, is the U.N. agency charged with financially supporting rural livelihoods; the organisation was set up in response to a crisis of food security in the 1970s.  Cooke said there were no clear guidelines attached to previous funding on how women would benefit.

The alliance isn’t waiting for a deal to be reached to complain that gender blind funding is failing the women who may need it most. Instead they are initiating proposals that will ensure women are the agents of change, able to create and adopt new agricultural options and explore other entrepreneurial ventures as a way of adapting to climate change.

Constance Okeletti, a smallholder farmer from Uganda, said women have a lot of knowledge useful for adaptation because they work with the environment through their household duties: include fetching water, gathering firewood and fruits and farming.

“We’ve been trying to adapt since climate change started to affect us. With the money we can do more,” she said.

Okelleti observed that most development aid to African countries does not penetrate to the women at grassroots level because there are no specific provisions of how much of it should go to the poor.

“We don’t know whether it’s eaten by politicians or the workers in the cities,” said Okelleti, who is representing a network of 40 groups of small-scale farmers in Uganda.

“Women fail to hold those in authority to account because we don’t even know how much was meant for helping out women,” she continued.

“We expect the final text of the declaration to emphasise the percentage of the funds that are expected to assist women projects so that they adapt to climate change,” said Okelleti.

GGCA, in collaboration with the United Nations Development Programme (UNDP), has come up with a women’s Green Business Initiative to promote women’s entrepreneurship opportunities in the sphere of climate change adaptation and mitigation to try and tap into the climate change funding.

“For example through the initiative a local women’s group in Rwanda uses a voluntary carbon credit grant to implement a bamboo project for income generation and environmental protections,” said Lucy Wanjiru UNDP’s gender and climate change and GGCA.

She said with funding from the Clean Development Mechanism (CDM), the Adaptation Fund, and new money coming from reduction of emissions from deforestation and degradation (REDD) schemes, women could be the ones accessing funds to start ecologically sustainable projects – be that planting trees or managing eco-tourism ventures – and earn a living.

“Agriculture is the sector most vulnerable to climate change,” said Cooke. “An extra two million people in sub-Saharan Africa are going to be affected by water shortages and the majority of these are women.”

If a deal reached at the U.N. Conference on Climate Change is to achieve its objectives, he said, it will have to incorporate a gendered perspective.