JOHANNESBURG and CAPE TOWN, Jan 25 2010 (IPS) - The seizure of large commercial farms – almost all white-owned – has continued despite the formation of a unity government in Zimbabwe. The country’s farm workers say they are the biggest losers. 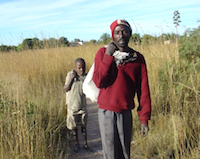 Since 2000, up to 75 percent of farmworkers in Zimbabwe have been evicted by govt-sponsored land seizures. Credit: IRIN

The workers say that Southern African Development Community (SADC) leaders must intervene immediately to stop the violence against them.

About one million farm workers have been evicted from farms across Zimbabwe since the year 2000, according to the Geneva-based Internal Displacement Monitoring Centre.

This is a huge percentage of the total Zimbabwean farm worker population, which was estimated by the Justice for Agriculture Trust based in Harare at somewhere between 1.3 and 1.9 million before the land seizures began. Zimbabwean refugee rights group People Against Suffering, Suppression, Oppression and Poverty (PASSOP) says around 100,000 are now working on farms in South Africa.

"The situation for Zimbabwean workers is dire," says Philani Zamuchiya, of the Institute for Poverty, Land and Agrarian Studies (PLAAS). "Although South African labour laws protect them, commercial farmers continue flouting the regulations because they already have a pool of workers waiting to take up employment," he noted.

In the Western Cape Province, problems worsen during the off-season for work in the vineyards. The five-month lean period is the most difficult for farm workers who struggle to meet basic necessities, let alone send money to their families back in Zimbabwe.

Constant threats and taunts by locals are another reality the foreign workers live with. Over 3,000 Zimbabweans were driven from their homes at Stofland, near the town of De Doorns during attacks in early November 2009.

In addition to long-simmering xenophobia, Zimbabwean rights organisation PASSOP and farm worker union Sikhula Sonke say the attacks were prompted by a turf war between labour brokers who deepen poverty for migrant and national farm workers alike as intermediaries between employers and the farm labour force.

“They were promising to give us labourers good wages after removing these white farmers,” Rufaro* said.

But things quickly soured. “Some ZANU-PF youth went around hitting and raping farm workers and beating them to death. Farm labourers were thrown out of the farms with their employers and some farmers ran away without paying anything to farm workers,” said Letty*.

The workers said at least three major farms had been invaded since the unity government was formed – Usasa Seedlings, Mount Carmel (a mango farm) and Stockdale citrus farm.

Stockdale, in the Chegutu district in Mashonaland West, was invaded in April 2009 by the speaker of the Zimbabwean parliament, Edna Madzongwe, despite a ruling by a SADC tribunal which said 78 white farmers who faced losing their farms could keep their land.

The SADC tribunal ruled in favour of the farmers in November 2008, finding the land redistribution programme discriminatory on the basis of race. With the Zimbabwean government failing to act on the ruling, the tribunal in June 2009 referred the case to the SADC summit of heads of state.

The farm workers said Mugabe has simply ignored rulings from the SADC tribunal, which was set up in Namibia in 2007 to rule on disputes in the Southern Africa region.

For now, an estimated 60,000 farm workers find themselves living in makeshift camps, often on the roadside near where they were evicted from, waiting for the government to resettle them.

“Some few farm workers who were lucky were resettled. But if they labelled you MDC you were not going to receive anything. We need land now to resettle the poor who have no place to stay,” Tapiwa* said.

Many farm workers are living on donor handouts now, while others have fled to South Africa. Letty said that of the few farm workers who still have jobs, women are in the majority. Because they are paid less, they are still found in small numbers at work on Zimbabwe’s potato and horticultural farms.

“After the land invasions started,” Rufaro said, “and we were evicted from the farms, most of our kids did not go to school for two years. We women end up having kids at home without food, because we had no money and all the shops were empty because the farms had closed down.

“The stress for women with four kids at home day and night for two years… it was a pity for us,” Rufaro said.

In the long term, all three say, land reform will only work in Zimbabwe if the land grabbed by members of Zanu-PF over the past ten years, is handed over to the state.

Tapiwa said he did not advocate a return to white-owned commercial farming in Zimbabwe. “The best method is that those who have farms now must hand them over to the government. Government must subdivide them and give them to the landless people to farm,” he said.

Instead of buying up huge white-owned farms and transferring them to a few people, a new smallholder farming model would see farms being subdivided to give more people access to the land.

“It’s about the mentality of what commercial agriculture is and seeing what is really possible,” Greenberg said.

He told IPS that the model had already been put into practice in Masvingo, south eastern Zimbabwe.

“There were white commercial farmers farming a few cattle on huge tracts of land that they said was poor quality. These farms have been divided up into 10-20 hectare plots that are now producing crops,” he said.

Tapiwa had a warning for South Africans – “We should have organised to bring our government to task, especially during the voting period. I see in South Africa the economy is also in the hands of whites,” he said.

“You need to have a move here towards taking control of the economy and then once the economy is in blacks’ hands, move towards the land.”

“That is why we are advising you South Africans to make a plan now before you reach the point where you grab the land,” said Rufaro.

But Greenberg says that while the ruling ANC is likely to come under more pressure to redistribute the land, South Africa’s rural areas lack a strong movement to take back the land.

“Although there is a frustration, there is not yet a rural movement strong enough to take the land in South Africa” he said.