LAKE VICTORIA, Kenya, Apr 16 2010 (IPS) - The International Centre for Plant Physiology and Ecology (ICIPE), based at Mbita, on the Kenyan shores of the world’s second-largest freshwater body, is advocating “push-pull cultivation” as the answer to feeding future generations in Africa. 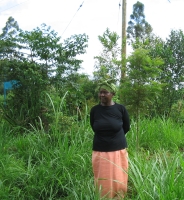 Up to 30,000 small farmers in East Africa, mostly in Kenya, have adopted this natural method of controlling pests and weeds in maize, the staple crop.

Push-pull cultivation intersperses the desmodium plant with maize in a plot, and plants napier grass as a border on all sides.

The desmodium repels, or pushes, the stem borer – a major pest – from the maize, and controls the dominant weed, striga; the napier grass attracts, or pulls, the borer towards it.

Approximately 25,375,000 hectares in sub-Saharan Africa are under maize cultivation, of which 6,122,000 ha are affected by the parasitic striga weed which strangles the maize plant.

East Africa loses US$7 billion worth of maize worth of maize due to striga and around $5-6 billion from the cereal parasite stem-borer insect, according to ICIPE.

The chemical-free system against them was developed by ICIPE scientists in collaboration with Rothamsted Research in the United Kingdom, the Kenya Agricultural Research Institute and various national partners, with funding from Kilimo Trust (East Africa), Gatsby Foundation (UK) and Biovision (Switzerland).

While farmers may opt to use fertiliser on a push-pull field, desmodium both retains moisture in the soil and fixes its nitrogen content at the rate of 110 kilogrammes per hectare per year.

The plant remains in the field after the maize is harvested, and is simply trimmed back to allow new maize to be planted.

“This is the answer to Africa’s food security,” says Dr. Zeyaur Khan, principal scientist developing the push-pull project at ICIPE. “This will provide the magic number of $2 and over in Africa.”

Khan says farmers in Africa will stop migrating to cities in search of incomes if they can earn more than $2 a day in their fields.

Khan says the production of maize by farmers using the method has gone up from less than one tonne per hectare previously to 3.5 tonnes per ha, an increase that ensures year-long food for smallholder family.

Both desmodium and napier are fodder grasses that also help cattle and milk production, besides giving extra income through the sale of its seeds.

At Ebukanga village near Mbita, 45 year old Agnes Mbuvi says her production of maize on her 50 by 40 metre plot has gone up from half a bag (45 kilos) to a remarkable 6 bags (540 kilos) of maize per harvest.

“I have enough milk throughout the year, enough food, the soil is easy. I am happy,” she says.

Mbuvi, a widow, also adds that the extra income from the sale of surplus maize and milk has helped her educate her children.

“School education helps in changing the minds of people,” he says, explaining why his neighbor has not yet adopted the system in spite of seeing Ameyo’s huge increase in yield.

“We don’t need much money, we need appropriate technology,” says Khan, who is critical of multinational seed and fertiliser agencies and international donors supporting the giving of seed and chemical fertilizers to farmers in Africa.

ICIPE is now testing the efficacy of the push-pull method in rice cultivation, and against the cotton bollworm, both features that bode good news for millions of Asia’s small farmers.

In the context of climate change, ICIPE is encouraging farmers to plant cotton as a second crop in addition to a food crop.

The roots of the cotton plant also produce chemical flavinoids and isoflavinoids, similar to the desmodium root, that help kill the striga weed.

The napier grass however, has developed a disease, called ‘napier stunt’ that harms its growth and slowly kills the plant. Research is now on at ICIPE with an indigenous species of napier that is resistant to stunt.

“Ten years ago, this disease was not found in napier,” says Khan. “We now find it is a phytoplasm bacterium, passed on through an insect, the leaf-hopper, to the napier grass, and came from grass. This is the danger for the future,” says Khan.

Meanwhile, however, the push-pull system of agriculture also offers a system of mitigation to climate change by its moisture-retention and ability to survive droughts.