RIO DE JANEIRO, May 11 2010 (IPS) - The longstanding debate between eviction or upgrading of Rio’s “favelas” or slums has gathered new force as this one-time capital of Brazil still shows the hillside scars left by rain-induced landslides in early April. 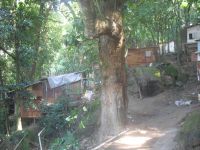 Controversy surrounds the plan for compulsory evacuation of at-risk zones, designed to prevent tragedies like those resulting from the early April storms: 256 people dead and thousands left homeless in the southeastern state of Rio de Janeiro, according to official figures.

The decree from the mayor’s office of Rio do Janeiro, Brazil’s capital until 1960, calls for the evacuation of the residents of the densely populated neighbourhoods located in areas subject to landslides or flooding. The relocation is to take place even against their will and, if necessary, could involve the security forces.

The “Morar Seguro” (Live Safely) plan is, according to Rio’s Mayor Eduardo Paes, “the end of demagogy,” but Mario Brum, a historian specialising in favelas, sees it as “the reappearance of the phantom of the darkest periods of our history.”

Brum points out that favela removals reached a peak during the 1964-1985 dictatorship, when 175,000 people were forcibly relocated.

In a Tierramérica interview, the historian noted that this practice “became a policy of the State” in the 1960s through the first half of the 1970s, giving rise to several housing projects, like Cidade de Deus (City of God), which director Fernando Meirelles made famous in the film of the same name.

The plan to move the favelas to those housing units was abandoned because the people it was supposed to benefit could not afford the new living expenses or the cost of transportation. Many ended up returning to their precarious homes, Brum said.

“The deluge that hit in early April has forced us to reflect,” said the historian in an article published on the website of the Brazilian Institute of Social Analysis and Research (IBASE for it Portuguese initials).

In his essay titled “Rio and the Favelas: the Future and Citizenry After the Flood,” Brum wonders, “Will all the inequality have been washed away by the water or landslides?” or reinforced in a city that “has not yet finished counting her dead?”

“The principal structural cause is income inequality in Brazilian society,” linked to a lack of housing policy for the poorest sectors from a neglectful government, Magalhães told Tierramérica.

The expert criticises the “penalisation” of the poor, as if they were responsible for their own tragedy. He also underscores the fact that nobody is mad enough to want to stay in a place where one’s life is at risk, as was evident in the “lack of resistance” to the evacuation.

Leaders of social movements also challenge the city government’s failure to consult the people to be affected by the relocation.

“The government comes with this package of solutions for people who are still suffering from the tragedy and have not been able to reorganise their lives,” said Mónica Francisco, a community leader in the Morro do Borel favela.

Nobody asks them where they would like to be moved or whether, for example, there might be transportation problems with the new locations, said Francisco, a university student in the social sciences.

But the more difficult problem to resolve, she told Tierramérica, is what turns out to be a sort of emotional exile for the people relocated to other neighbourhoods, forced to “abandon their roots” and the “proximity of their affective relationships.”

The evacuation plan initially covers some 4,000 families from eight favelas, according to Mayor Paes’s plan, who explained that the decision was made after detailed technical studies were conducted. However, the favela leaders charge that the studies are insufficient.

In Morro dos Prazeres, one of the eight favelas that Paes mentioned, the Civil Defence of Rio de Janeiro state identified 946 houses to be vacated, but the Neighbourhood Association countered that just 100 were in the area of the landslides.

A cruel symbol of the housing deficit there was the image of an elderly man wandering among the rubble where firefighters continued to search for victims of the landslides into mid-April.

Carlos Minc, who served as the national environment minister until the end of March, stated what for many does not seem so obvious: “Nobody lives in a favela if they have a choice.”

One of the solutions is to improve the mid-sized cities of Rio de Janeiro state to staunch the influx of people into the metropolitan area, proposed Minc, state deputy for Rio and incumbent candidate in the October elections, representing the leftist Workers’ Party (PT-Partido dos Trabalhadores), of President Luiz Inácio Lula da Silva.

Minc told Tierramérica that he is confident of the approval of a law that earmarks 10 percent of the houses included in the government’s general construction plans for people residing in at-risk zones.

One of the difficulties is the lack of infrastructure and services in the areas to which the former favela residents are relocated.

Another mistake of previous programmes was to build housing “far from the dynamic areas of the economy,” explained sociologist Magalhães.

As such, the state environment secretary Marilene Ramos noted that one of the “Live Safely” programme points is an investment of one billion reais (about 540 million dollars).

“One of the problems to resolve in the possible areas of relocation is the lack of infrastructure, like potable water, sewers and roads,” the official told Tierramérica.

The new programme would put those systems into place before building the homes, she promised.

In that respect, he said, major events like the 2016 Olympic Games to be held in Rio de Janeiro should serve to revitalise some central areas and to build housing units that can later be passed on to the city’s poorest families.