MIDEAST: Is Israel Sliding Towards a Police State?

RAMALLAH, May 12 2010 (IPS) - Israeli nuclear whistle-blower Mordechai Vanunu has been sentenced to another three months imprisonment for allegedly refusing to perform community service in West Jerusalem. 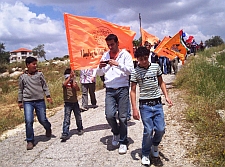 Palestinians and their Israeli and international supporters protest against the separation wall. Credit: Mel Frykberg/IPS

Vanunu, a former employee at Israel’s secret Dimona nuclear facility in the Negev desert, spent 18 years in jail after he revealed information about the facility to the international media.

He was kidnapped by Israel’s intelligence agency Mossad in Rome and brought back to Israel where he served his sentence, most of it in solitary confinement.

Vanunu was ordered on his release not to speak to foreigners or the international media, an order he has broken numerous times.

However, remarks by the prosecutor that Vanunu still poses a threat to Israel’s security decades after he was sentenced and had already revealed all he knew has raised questions about whether he is being unnecessarily persecuted.

Just how much power Israel’s domestic intelligence agency the Shin Bet has and whether Israel might be turning into a police state has also been the subject of media speculation recently.

This follows the secret midnight arrests of a Turkish national and several Israeli-Arabs on espionage allegations and the gag orders surrounding the arrests.

There are a number of other incidents involving the Shin Bet. At the beginning of the year the Shabak, as the Shin Bet is also known, placed a gag order on the circumstances surrounding the arrest and interrogation of Israeli journalist Anat Kam.

Kam is alleged to have copied secret Israeli Defence Forces (IDF) documentation on extra-judicial killings of Palestinian resistance fighters with the liquidations being carried out in contravention of Israeli court rulings.

Israelis were the last to find out about Kam’s house arrest, months after it happened, when it made big news internationally and was reported extensively on the Internet.

A week ago two Israeli Arabs, Ameer Makhoul from Haifa, the director general of the Ittijah charity, and Omar Said, a member of the Balad political party, were arrested by the Shin Bet and heavily armed anti-terror squads during night raids on their family apartments.

The two have been accused of passing on information to the Lebanese resistance organisation, Hezbollah. The Shin Bet again placed a gag on the arrests until a few days ago with some of the details still remaining secret.

Critics argue that the allegations are flimsy at best and have more to do with Makhoul supporting a boycott of Israeli settlement goods and his campaigning for equal rights for Israeli-Arabs.

Speculation is also rife that Makhoul’s brother Amir’s (a former member of the Israeli Knesset) speech to the Knesset, about Israel’s clandestine nuclear armaments and his comments that Israel should begin nuclear disarmament, had already focused security attention on the family.

Makhoul’s arrest comes at a time when the International Atomic Energy Agency (IAEA) is slated to discuss Israel’s nuclear programme for the very first time ever at its forthcoming June meeting.

A number of other Palestinian grassroots activists, involved in the Boycott, Disinvestment Sanctions (BDS) campaign and protests against Israel’s separation barrier, remain incarcerated in Israeli jails in administrative detention or without trial. Abdullah Abu Rahme, a member of Bili’in’s village committee against Israel’s separation barrier, which has expropriated large swathes of the village’s land, has been held for more than five months in administrative detention.

The Israeli authorities accuse him of incitement in planning weekly non-violent demonstrations, supported by Israeli and international activists, against the wall as well as possession of arms.

The latter accusation relates to his arrangement of used teargas canisters and rubber-coated metal bullets into a peace sign after the IDF had fired them at protestors.

Another Shin Bet gag order was placed several weeks ago on the arrest in the West Bank of Turkish national Izzet Shahin, a volunteer for the Turkish NGO Foundation for Human Rights and Freedoms and Humanitarian Relief (IHH).

Izzet is accused of belonging to IHH, an Islamic group outlawed by Israel, and of helping to organise an aid boat to Gaza as part of the flotilla of humanitarian relief which is heading towards the coastal territory at the end of May.

The deportation several weeks ago of a famous Spanish clown from Israel’s Ben Gurion international airport on the grounds he intended to make contact with “terror organisations” while in Ramallah has seen some Israeli commentators calling the Shin Bet “the real clowns”.

Ivan Prado had planned to take part in an international clown festival in Ramallah but after six hours of interrogation by the Shin Bet he was refused entry to Israel and deported to Spain on “security grounds”.

The incident caused embarrassment at the Israeli Foreign Ministry and heightened tensions with the Spanish government.

Meanwhile, a number of Israeli leftists are facing trial for “rioting and assaulting police” during a non-violent protest in the East Jerusalem suburb of Sheikh Jarrah. They were protesting Israel’s building of illegal Jewish settlements and Judaisation of the neighbourhood at the expense of the Palestinian locals.

The protestors claim the charges are trumped up and they were arrested after they refused to disperse during a demonstration approved by an Israeli court.

In another development, IDF military intelligence has also caught flak for over-ruling an Israeli court decision to fully open a main highway in the West Bank to Palestinian motorists.

Highway 443 has been used by Jewish settlers exclusively for years even though it is built on Palestinian land and it runs alongside many Palestinian villages.

Despite the court ruling the IDF will only open parts of the highway to Palestinian motorists and only after extensive security checks at roadblocks at the highway’s entrance.

In further breaking news several Palestinian medical students have been refused entry permits to Jerusalem to continue their studies at Jerusalem’s Al Quds University after they refused to spy for the Shin Bet on student activity there.

The Shin Bet declined to discuss the issue other than to say the permits had been denied “on security grounds.”