FILM-CUBA: “I Fought for This, But Not Just to Be a Housewife”

HAVANA, Sep 3 2010 (IPS) - Mavi Susel, the first transsexual in Cuba to undergo sex reassignment surgery, back in 1988, has found herself trapped in the traditionally assigned gender role of a housewife. 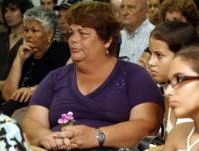 “She is a woman imprisoned in that gender role,” Marilyn Solaya, the Cuban filmmaker who made the documentary “En el cuerpo equivocado” (In the Wrong Body), told the press.

The film, which premiered in mid-August in Cuba, was produced with the support of the second edition of DOCTV Latinoamérica, the first regional programme to foment production and television broadcasting of Latin American documentaries.

The story of Susel, who underwent gender reassignment surgery on May 22, 1988, goes beyond the “complex and, above all, necessary” issue of transsexualism, to explore “the construction of gender” and the prevalence of the traditional role of women in Cuba, Solaya said.

“After Mavi showed herself so capable of standing up to society, she ran up against her limits. She became the woman she always wanted to be, that she learned to be, that society has taught her to be: traditional and domestic,” Danae Diéguez, an expert on gender and filmmaking, told IPS.

According to Diéguez, who says the documentary is bound to trigger controversy and debate in Cuban society, the gender role aspect “should also be discussed.”

At the age of 49, Susel, a homemaker who is dedicated to caring for her elderly mother and her husband, decided to start breaking out of her private realm: in place of her dream of becoming a nurse, she began to provide assistance at a health centre, and she joined an amateur singing group.

“I fought for all of this, not only to be a housewife; I had dreams. I said to myself: I’m going to have my marriage, my house, but I’ll also be useful to society, I’m going to fulfill my aims, but I wasn’t able to…,” Susel says with regret in the documentary, which touches on two sensitive issues: the traditional role assigned to women, and the social integration of transsexuals.

The negative public reaction sparked by a 1988 article on Susel’s operation, published by the Juventud Rebelde newspaper, cut short the possibility of gender reassignment operations for transsexuals in Cuba for two full decades.

It was not until June 2008 that a Public Health Ministry resolution approved sex-change operations, free of charge, along with complete care, including diagnosis and pre and post-op interviews, hormonal treatment, surgery and follow-up.

The strategy was promoted by the National Centre for Sex Education (CENESEX), run by Mariela Castro.

So far, 10 male-to-female operations have been carried out, and according to Castro, the first two female-to-male sex change operations are set to happen this year.

CENESEX has also been working on legal initiatives that would guarantee the rights of transgender people, while engaging in awareness-raising activities aimed at breaking down stereotypes and prejudice against sexual diversity that are still widespread in Cuban society.

Nevertheless, despite the continued stigma, Susel took the stage to loud applause on Aug. 18, at the premiere of the documentary in the Cine Charles Chaplin, an art-house movie theatre in central Havana.

A sense of empathy continued to be expressed by spectators at cinemas like Yara, also in Havana. A week after the film first came out, “most of the audience only came to see the documentary, and left afterwards” without staying for the main feature in the double bill programme, Georgina Gavilán, who works at the theatre, told IPS.

Like many of the people in the audience, Danny Cedeño, a local musician, left after the final credits rolled for “In the Wrong Body”. On his way out, he told IPS that “Cuba is maturing with respect to the whole transsexual, homosexual, bisexual question.”

“There were three young guys sitting behind me, making horribly rude comments. They were obviously teenagers,” complained Cedeño, who described the general public reception, however, as positive, and the 52-minute film as “courageous.”

Rosa Antúñez, a schoolteacher, said she was moved by the documentary, which she said enabled her to better analyse and understand the situation faced by transsexuals. “It’s not their fault that they were born different,” she said.

Despite the film’s popularity, Cuban television will not yet air it. Nor will the other 13 DOCTV Latinoamérica II documentaries be broadcast on TV here.

“The first series hasn’t been shown on television yet,” Marisol Rodríguez, who organised the selection of the DOCTV documentaries in Cuba, told reporters.

Reinier Hernández, a university student, said Susel’s story should be shown on TV, although “not everyone is going to accept it.”

Adding that the film “could really help people understand and respect these people,” he said he believes the real problem lies in society’s rejection of them.

Sissi García, a transgender CENESEX outreach worker, told IPS she believes the documentary is not being shown on television “because of the problem of homophobia.”

“Television is more complicated,” she said, pointing to the negative public comments and protests over lesbian characters in the Cuban soap opera “Aquí estamos” (Here We Are), which recently went on the air.

“There are people who bad-mouth the lesbians in the programme. But there are characters who beat their wives, and the domestic violence shown is seen as something normal,” she said.