JIAJU, China, Oct 27 2010 (IPS) - In 2005, the ‘National Geographic China’ magazine named this ethnic Tibetan village in western Sichuan province, sprawled over a valley wall amid snow-capped mountains, China’s most beautiful. Depending on how you look at it, that distinction was either a blessing or a curse. 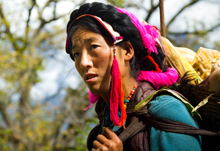 During the National Day Holiday in October, middle-class Chinese tourists from Sichuan’s capital, Chengdu, and beyond, literally crawl over this “Model Tibetan Village,” as a regional brochure puts it. For an entrance fee of 30 yuan (4.48 U.S. dollars), tourists wander through locals’ multi-storey stone homes and pose for pictures on rooftops decorated with drying corn.

On almost every rooftop, alongside faded Tibetan prayer flags, flies the red and yellow flag of the People’s Republic of China.

“It’s beautiful,” a young woman from Chengdu, visiting with five friends, says of the village. “It’s not that famous yet, like Shangri-la or Lijiang, but it’s getting more popular.”

Shangri-la and Lijiang are among the most popular tourist destinations in China’s south-west, home to a good number of the country’s rich mix of ethnic groups. The old town of Lijiang is also a United Nations Educational, Scientific and Cultural Organisation (UNESCO) World Heritage Site.

The village of Jiaju has no doubt benefited as a result of tourism – there are few signs of poverty and many villagers own new cars and sports utility vehicles But tourism has also impacted the surrounding environment and changed the fabric of the village. Indeed, Jiaju embodies many of the issues China’s minority regions face as the country’s internal tourism industry grows.

As Chinese grow wealthier and become better travelled, many are seeking more authentic experiences than tour groups can offer. These tourists, armed with Gore-Tex outerwear and telephoto camera lenses, are beginning to visit China’s remote regions – many populated by minority groups – including Sichuan, Yunnan and Tibet.

Wang Huigui, who works for an international company in Beijing, is an example of this new breed of Chinese traveller. Wang, who calls himself a ‘lao lu’ – seasoned traveller – travels solo and has been to Sichuan’s Tibetan region five times, and Tibet proper four times.

“I come every year to these areas. I like taking pictures,” Wang says atop an ancient Tibetan tower in the town of Zhong Lu, a less travelled village about 20 minutes drive from Jiaju. “I’m very interested in China’s minorities – their history, their culture, their language.”

Li Fei, a manager at state-controlled China Shan-Shui Travel Agency, which is affiliated with the Ministry of Land and Resources, says interest in trips to the Tibetan Autonomous Region has skyrocketed in recent years. He says the agency receives up to 70 and 80 applications to visit Tibet every day, and will accommodate about 2,000 tourists a year.

“They love Tibet,” Li says. “The feedback we get is very positive. They think the lakes and sky are really clean.”

In China, however, appreciation of minority cultures can quickly turn to exploitation. The country is home to a growing number of minority-themed tourists parks, such as the Dai Minority Park in south-west China’s Yunnan province.

There, local villagers are forbidden from making major changes to their traditional wooden-stilt home and are paid to perform a daily water-splashing ritual for which they are famous. The real water-splashing festival normally lasts just three days a year. The park, owned by and catering to majority Han Chinese, welcomes a half-million tourists per year.

The most famous minority park in China, Beijing’s Nationalities Park, for years featured English signs with the unfortunate translation “Racist Park.” In many parks, the ethnic minorities featured are actually Han Chinese dressed up as natives.

In minority villages, the idea is to provide a more authentic experience. But in places like Jiaju, a Disneyland-like atmosphere persists, and the local culture adjusts to fit Han preconceptions.

Jiaju, once an isolated mountain village, was introduced to the world after a 1998 visit by a Hong Kong traveller, who persuaded a local family to turn their home a guesthouse. Within a few years, dozens of neighbours followed suit, converting their homes or building new hostels from scratch.

But He says that governments at the federal and local level must take steps to protect the rights and interests of the minority cultures, rather than exploiting them to accommodate Han tourists.

“These cultures are unique, and an invasion of different cultures will destroy them. Furthermore, with an increasing number of tourists pouring into minority regions, the local governments commercialise the cultures, and even religious practices are changed,” He says.

“Every coin has two sides,” the tour operator Li says. “Profits from the tourism industry have poured into the minority regions. At the same time, cultural assimilation occurs. We make sure to tell tourists the local customs and taboos before their departure.”