CUENCA, Ecuador, Jan 6 2011 (IPS) - Outside the modest two-story adobe house, a flag of Ecuador flutters alongside a large sign that reads “Ikat: weaving demonstrations and sales.” Hanks of yarn and colourful fabrics hang from the handrail running around the edge of the courtyard and balcony, and weaving looms can be seen inside. 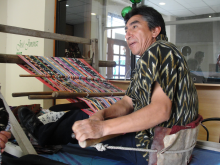 This is the home of José Jiménez, a craftsman who is helping to keep alive the art of “ikat”, a complex traditional style of weaving involving tie-dyeing of yarn to create intricate designs.

“There are just a few of us left who still do this, maybe 15,” Jiménez commented to IPS. “And to think that 40 years ago this craft was widespread in Gualaceo!”

Located along the road running from Cuenca — Ecuador’s third-largest city — to Gualaceo and Chordeleg, towns in the south of the country that are well-known for their weaving, embroidery and pottery, Jiménez’s house serves as his family’s home, workshop and store.

His wife Ana María Ulloa, a skilled embroiderer of black shawls with colourful flowers, also works in the business.

Jiménez and Ulloa, their four children and four employees are dedicated to “one of the most complicated approaches to dyeing found anywhere in the world,” in the words of the Smithsonian Centre for Education and Museum Studies.

In ikat, a Malay-Indonesian term, some sections of the yarn are knotted and covered prior to dyeing. This tie-dye technique, one of the oldest forms of textile design, is common to many cultures around the world, including Argentina, Bolivia, Ecuador, Guatemala and Mexico in Latin America.

“The paint brushes are in my head, because the design that the fabric will have comes from the way I have dyed the yarn, and how I have distributed the yarn on the loom,” said Jiménez, who added that the specific technique used by him and “the few of my fellow craftspeople who are left is unique in South America.”

Sitting on the floor, with his traditional backstrap loom wrapped around his waist, he tightens the warp, just as weavers in Latin America did for thousands of years before the arrival of the Spaniards.

For woven pieces over 75 centimetres wide, Jiménez uses the foot pedal loom, introduced by the Europeans.

“There aren’t only 15 of them left. Fortunately dozens of men and women are still dedicated to ikat,” anthropologist Gabriela Eljuri, regional director of the National Institute of Cultural Heritage, told IPS.

But she said that production of ikat fabrics is indeed in decline, especially due to the plunge in demand for the “macana”, a traditional cotton shawl with a knotted fringe.

The colourful macana was typically worn by “cholas”, women of mestizo (mixed-race, basically Spanish-Amerindian) descent, a social class that emerged in the mid-17th century, according to ethnohistorian Joaquín Moreno, the vice rector of the University of Azuay.

In the rigidly stratified society of the time, the Spaniards wanted cholas to be easily distinguished from both indigenous and white women, in their way of dress.

For centuries, the macana or “paño de Gualaceo” was a key element in the outfit of the “chola Cuencana” or chola from Cuenca, along with the Panama hat, an embroidered, pleated blouse, and two skirts, including an undergarment whose lower embroidered edge shows underneath the outer pleated skirt.

“The term ‘chola Cuencana’ does not have pejorative connotations, but has been a sign of regional identity. However, that is also being lost to globalisation,” Moreno said.

Emigration has played a key role in these changes. An estimated 200,000 people have left the southern provinces of Azuay and Cañar over the last two decades, mainly heading for the United States.

Although typical cholas Cuencanas can still be seen in Cuenca, there is a generational divide. “In this area, there are hardly any young people who wear the traditional dress,” Jiménez said.

Eljuri concurred: “In more remote villages like Sígsig or Nabón, young women still wear the dress of cholas, but in the rest of the region, almost no one under 30 wears the macana.

“Luckily, ikat textiles have survived thanks to the far-sighted work that CIDAP (Inter-American Centre for Crafts and Popular Arts) began in the early 1980s, anticipating the slow disappearance of the garment,” the anthropologist said.

María Leonor Aguilar, CIDAP assistant director of promotion, told IPS that for over 20 years the state agency, which was created in 1975, has supported projects and campaigns to keep the ikat tradition alive.

CIDAP has also helped solve problems with middlemen and supplies, in the provision of raw yarn and assistance in the sale and marketing of the finished product through fairs, exhibitions and warehouses in Cuenca and Gualaceo.

“Jiménez and dozens of craftsmen and women from Gualaceo have received scholarships from CIDAP to learn to use their marvellous art to weave a range of different articles,” she said.

Using the ikat technique, craftspersons in this area now weave scarves, shirts, vests, jackets, capes, purses, briefcases, billfolds, table runners and tablecloths, which are eagerly snatched up by foreign tourists and “well-heeled Ecuadorean city-dwellers, who appreciate the complexity of the technique and the artistic value of the work,” Aguilar said.

Jiménez himself is preparing a 30-metre long tablecloth and a dozen smaller ones to present to Ecuadorean President Rafael Correa, to be used at dinners and parties in the presidential palace.

“I told the president that it was painful to me to see only factory-made tablecloths, in TV shots, even if they were produced nationally,” he said. “And I asked him why he wasn’t proud of our tradition. He listened to me, and ordered the tablecloths, so I will go to Quito on Jan. 21, because we’re almost finished with them.”

But Jiménez did not want to show this reporter the tablecloths. “The first one to see them will be Mr. Correa,” he said, laughing.

“Many people think the design has been printed onto the fabric, and don’t realise that it emerges as a result of the tie-dye and weaving. The president will have to explain it to his visitors,” said Eljuri.