KIKWIT, DR Congo, Feb 24 2011 (IPS) - While discussion of hydroelectric power on the Congo River is dominated by the massive Grand Inga project and the dream of power for the entire continent, construction of a series of smaller dams to benefit local communities may produce tangible results much more quickly. 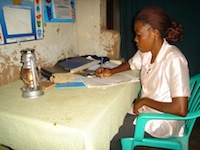 Grand Inga could generate as much as 39,000 megawatts of power. Earlier in February, a two-year, 13.4 million dollar contract was awarded to Aecom Technology Company and Éléctricité de France to carry out feasibility studies for the hydroelectric generation complex and transmission lines to carry power as far as Egypt, Nigeria and South Africa.

Too big to succeed?

But the Grand Inga project has already encountered setbacks and attracted criticism.

Westcor, a consortium of state-owned power companies from five Southern African states, had a proposed 10 billion dollar, 4,000 megawatt project for a site known as Inga 3 rejected by the Democratic Republic of Congo government in February 2010. The DRC authorities instead agreed to a smaller project with mining giant BHP Billiton on the same site that would principally supply a new aluminium smelter being constructed the company 150 kilometres away.

This project has been criticised by environmental justice groups such as International Rivers. Just six percent of Congolese have access to electricity, says International Rivers, and the BHP Billiton project would prioritise supplying energy-intensive industry rather than the needs of the population.

The environmentalists are also sceptical of the promise of the larger plans Aecom is now studying as well, arguing that the continent lacks a distribution network to carry power from a single mega-project to the majority of those who need it; they argue that the estimated 80 billion dollar price tag would be better spent on decentralised generation, including wind, solar and micro-hydro plants.

They also cite the risk of corruption and mismanagement, a warning given teeth by the 2008 disappearance of $6.5 million intended to rehabilitate one of the two aging power stations already in place at the Inga site.

While the debate swirls around the larger projects, February finds work under way on a dam at Kakobola, one of the first of up to 315 much smaller dams planned for sites around the country.

The Kakobola dam will provide electricity for three built-up areas in the southwestern DRC province of Bandundu. V. K. Sharma, head of the Indian company Angelique International Limited, which will construct the dam, says the dam will have a generating capacity of 9.3 megawatts.

“We are working on this project for the well-being of the population in Gungu, Idiofa and Kikwit,” says Sharma. His company will draw on the experience of building similar projects in Afghanistan, Rwanda and Sudan.

“It’s easier to build a dam on a river where there are falls such as this one,” Sharma told IPS in an interview at the dam site at Gungu, some 200 kilometres from Kikwit, the provincial capital.

The dam is being built at a waterfall on the Lufuku river which has a height of 29 metres, according to Sharma. The Kakobola dam will have a reservoir just four metres deep, and its turbines will not eliminate the natural falls on the river.

“The dam will cost 53 million dollars,” says Remy Matala, from the DRC’s energy ministry, which is collaborating on the project. “The Indian government, through that country’s Export-Import Bank, will put in 42 million. The Congolese contribution of 10 million dollars comes from the 2011 budget.”

Completion of the dam is eagerly awaited in the region. “I want the electricity supply to come quickly. It’s not normal for a city the size of Kikwit (around a million inhabitants) to be without electricity,” complains Mave Kupe, one of the many students in the city who must study by the light of storm lantern.

The project is scheduled for completion in January 2014. The more than three million residents of this area presently rely on paraffin lamps, candles or custom-rigged systems that power light bulbs from torches with a box containing a set of batteries.

The Kakobola dam will also contribute towards securing regular access to drinking water, particularly in Kikwit, where 800,000 people lack access to safe water.

When the contract for the dam was signed in Kinshasa in October 2010, the Congolese energy minister, Gilbert Thilongo, noted that the Kakobola project was first proposed in 1980. The installation is the first of an extensive series of small dams planned for the country. It will be followed by another dam in Katende, in Kasaï Occidental province, according to the minister.

“I hope that the work on this dam won’t stop mid-way,” said Emery Raphaël Mikolo, a nurse in Idiofa. “We have seen it many times in our country – the work starts briskly, but then a gloomy silence takes over.”

Louis Kasende, an opposition member of parliament who is the vice president of the Commission for Reconstruction and Development in Bandundu’s provincial assembly, wants the DRC government to state clearly when the money from India’s Import-Export Bank will be repaid.

Wire reports state the DRC will begin repaying the loan in 2016, and will then pay 1.75 percent interest over a 20 year period.

Maxime Pakumu, the director of the Gungu administrative zone, said the construction of the project will help to reduce employment in the region, as well as improving the quality of life, purchasing power, and even health outcomes thanks to electricity for health facilities in the area.

Though small-scale dams such as this one at Kakobola do not answer the question of powering energy-intensive industry in DRC and beyond, if the dam delivers the expected benefits for the region it sits in, it may create alternatives to a development path that relies so heavily on resource extraction.