Brazil at Risk of Agrarian Counter-Reform

RIO DE JANEIRO, Apr 27 2011 (IPS) - A process of “agrarian counter-reform” is taking place in Brazil, according to activist João Pedro Stédile, a leader of the Landless Rural Workers Movement (MST). 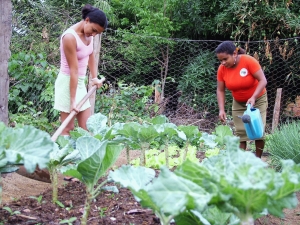 Farmers working in the Nova Conquista settlement in the state of Maranhão. Credit: Courtesy of MST

In the final stretch of President Lula’s second term, many legal expropriations of idle land on large estates were blocked in court.

In addition, the international financial crisis “had the opposite effect in Brazil, because in order to protect their funds, international capitalists ran to Brazil to invest in land and energy projects,” the activist said.

That led to a “perverse logic” in agriculture, in which purchases of unproductive land by the government were disputed and ownership became more concentrated, as part of “an agrarian counter-reform process,” he said.

The most recent official figures are from 2006. The Agricultural Census of that year, published in 2009 by the Brazilian Institute of Geography and Statistics (IBGE), shows that the concentration of rural land has remained virtually unaltered in the last two decades.

In Brazil, one of the countries in the world with the most uneven distributions of land, around 3.5 percent of landowners hold 56 percent of the arable land while the poorest 40 percent own barely one percent.

According to the IBGE, properties larger than 1,000 hectares cover 46 percent of Brazil’s farmland, while properties smaller than 10 hectares occupy barely 2.7 percent.

“The concentration is worse now than in 1920, when we were just getting over slavery (which was abolished in 1888),” Stédile told IPS. “We hope the government of Dilma (Rousseff) will change the agrarian policy, starting with INCRA,” Brazil’s National Institute for Colonisation and Agrarian Reform.

Every year, “red April” marks the anniversary of the Apr. 17, 1996 massacre in Eldorado de Carajás, in the northern Amazon jungle state of Pará, when the military police opened fire on a peaceful demonstration by some 1,500 unarmed landless rural workers protesting the slow pace of land reform. Nineteen members of the MST were killed.

Every April, the MST seeks to put the question of agrarian reform back on the political agenda. The issue was ignored in the 2010 campaign, which culminated in the election of Rousseff, a member of the leftwing Workers Party (PT), like her predecessor Lula.

As in previous years, the MST launched a campaign pressing for the faster distribution of land, including protests in at least 20 of Brazil’s 26 states, and 100 occupations of idle portions of large landholdings.

The MST reports a total of 1.6 million members across Brazil, and some 100,000 families are living in its squatter camps around the country, pressing for the redistribution of land.

Celso Lisboa de Lacerda was named president of INCRA, the federal agency in charge of land distribution, this month.

The agronomist, who was appointed to his new post in a ceremony in Brasilia, said he would try to change the widespread view that “land reform” is synonymous with “conflict,” and he would try to come up with mechanisms of food production in the squatter camps.

“The big challenge is still to resolve the question of agrarian reform, and the fight against extreme poverty in the countryside is an important mission,” Lacerda told IPS. “At the start of President Lula’s government, a framework for land reform was established, replacing what was until then a mere distribution of land.”

The new president of INCRA, who has a background of involvement in social movements, defends the participation of organisations like the MST in designing public policies, and advocates “frank, sincere and transparent dialogue, without creating false expectations.”

In his first year at the head of INCRA, Lacerda plans to set goals and create structures for monitoring the implementation of public policies, while expanding the land reform institute, which currently has 30 superintendencies or regional offices, and a total of nearly 6,000 officials and employees.

The president of INCRA acknowledged that the process of expropriation of idle land by the government for the purposes of agrarian reform – in accordance with the Brazilian constitution which explicitly states that land must be used for the benefit of society – is too slow.

“It is a very precarious, complex, dispute-ridden process,” said Lacerda. “At times the property spends 15 years winding its way through the courts. We do what can be done, that’s the naked truth.”

Close to 500,000 families have been settled on plots of their own, according to the MST. But the movement says that more than four million rural families are still landless in this country of 191 million people.

But in an interview with IPS in Rio de Janeiro, the MST leader said the new government, which took office in January, could “revitalise” the institute.

“In the last three years, INCRA has become an inoperative, ineffective agency, plagued by serious cases of corruption. The majority of the superintendents were appointed by factions of political parties. We are hopeful that the new president will live up to the government’s social commitment, and to the task of providing training and advice” to the newly resettled farmers, Stédile said.

The country’s social movements were encouraged by Rousseff’s promise to make the fight against poverty a top priority of her government.

“Fighting poverty in rural areas necessarily implies the right of access to land,” Stédile said. “It’s not just a question of resolving problems on an emergency footing. We have to come up with a new land reform programme that simultaneously combines expropriation, the installation of agribusiness, and the achievement of universal education.”