China Puts Its Mark on Malawi

LILONGWE, Apr 20 2011 (IPS) - Driving through Malawi’s capital, Lilongwe, it is difficult to miss the imposing building under construction in the city centre. It’s the country’s first five-star hotel, 90 million dollars worth of well-appointed rooms, a state-of-the-art conference centre and 14 opulent presidential suites. 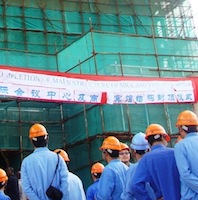 The hotel is being built by the Shanghai Construction Company, a Chinese firm, and is one of numerous projects funded in line with a pledge of 260 million dollars of concessionary loans, grant and aid from China to Malawi to support development, including infrastructure.

At a ceremony marking the completion of the main building and conference centre, China’s ambassador to Malawi, Pan Hejun, said he expects the whole project will be completed by the end of the year.

“This will attract more and more foreign tourists to Malawi and enable Malawi to host international conferences such as the AU Summit,” said Hejun.

Chinese construction companies have been busy in Malawi. Parliament now operates from a grand new building which was opened in June 2010. That project cost around 41 million dollars.

And this month Ambassador Hejun announced China will assist the Malawi government to construct a university of science and technology in the southern district of Thyolo, which, he said, will be ready in just under two years.

“The university, which will accommodate more than 3,000 students with advanced facilities, will be one of the best universities in southeastern Africa, and will make great contributions to the national development of Malawi,” said Hejun.

Chinese construction companies are also building a secondary school in Thyolo, and a 100-kilometre road between the northern districts of Karonga and Chitipa. The Asian nation has also promised to build a China-Africa Friendship School in Lilongwe, establish solar and biogas pilot projects and set up an agricultural technology demonstration centre.

China’s presence in Malawi has been growing steadily since the two countries established diplomatic ties in December 2007, Malawi abandoning its links to Taiwan after 41 years. A memorandum of understanding covering industry, trade and investment was signed between the two countries in May 2008, committing China to help in increasing the productive capacity of Malawi in tobacco, cotton, mining, forestry, fertiliser production and in processing hides and skins.

A 2010 report from Malawi’s Ministry of Trade indicates that the value of trade between Malawi and China has doubled since 2007, reaching 100 million dollars in 2010, rapid growth, though still dwarfed by trade with South Africa, which accounts for just over 40 percent of Malawi’s total trade volume of 3.2 billion dollars.

Malawi’s president, Bingu wa Mutharika, has declared himself satisfied with his government’s relations with China. In an April speech at the laying of foundations for the planned university of science and technology, Mutharika said the Chinese projects come with “no strings attached”.

“The People’s Republic of China has demonstrated that they are good friends of Malawi,” said Mutharika.

This year alone, Chinese nationals working in Malawi in construction or as traders have featured in a number of unwelcome headlines. In January, police at the international airport caught Zhang Xiang Quian trying to smuggle 3.5 kilogrammes of ivory bangles, curios and necklaces out of the country. The same day, Jennifer Li was arrested when she attempted to bribe police to release Zhang. The two – who both held senior positions with the Shanghai Construction Company – were fined and deported.

In February, the owner of the China Superscope Media Company, Ning Naixing, was apprehended at the airport with 1.5 kilogrammes of ivory. Police assert the ivory in both cases originates from elephants poached in Malawi. The Ministry of Tourism issued a statement on Feb. 11 warning against trafficking of ivory.

Chinese traders – who have established a firm foothold in the wholesale and retail sectors in Malawi – have also run afoul of the law. Businesswoman Yani Huang was arrested and fined for violating foreign exchange controls in November 2010, when she tried to leave the country with an undeclared $18,350. A few months earlier, another Chinese national was arrested trying to take $144,000 out of the country.

Malawi is experiencing acute shortages of foreign exchange, leading to strict controls on the export of hard currency. This complicates life for Chinese traders who want to repatriate profits made in Malawi.

Local traders are also anxious over competition from the new arrivals. “Some are setting up small-scale businesses and competing with indigenous traders. They are making life difficult for us,” Maddy Gawani, a trader who runs a clothes shop in Lilongwe, told IPS. She said there are big Chinese-owned wholesale shops in Lilongwe’s Old Town, a cheap area of the capital city.

“Many items in the Chinese shops are cheap but not very durable. A lot of people now shop from the Chinese who bring in many things in bulk. We are not happy as local traders,” said Gawani.

Relations between the new traders and their clients are sometimes tense as well. Last year, trader Chen Bo Wet was arrested in the lake district of Mangochi after he allegedly forced a woman he suspected of stealing from his shop to undress in the presence of other customers. Nothing was found on the woman, and he was arrested following complaints.

When the memorandum of understanding on trade and investment was signed, local groups feared it would have a negative impact on the country.

At the time, Mavuto Bamusi, the network coordinator of the Human Rights Consultative Committee (HRCC), which promotes human rights, including economic rights, in Malawi, said the evidence was that Chinese investment had harmed the interest of poor nationals in some countries.

“We know that the Chinese usually bring in their own workers when they invest in poor countries and that they have been accused of dumping cheap goods on such countries’ markets. Civil society will be quick to raise an alarm if such malpractices happen here,” Bamusi told IPS.

But the Malawi Congress of Trade Unions has been keeping a close eye on the situation. MCTU Secretary General Robert Mkwezalamba told IPS that when they first arrived in the country, Chinese construction companies either paid their Malawian workers below the minimum wage or paid them in kind – in the form of clothing, bicycles, maize flour and sugar. In some cases, workers were not provided with protective gear.

“They were paying the Malawi workers just about $13 per month when the country’s acceptable minimum wage is $20. Some Chinese factories were locking up the workers [in their workplace] overnight,” said Mkwezalamba.

But, he said, companies have responded to the MCTU’s objections.

“We have been asking them to change and they are accepting our demands,” he told IPS. “We are also happy that the construction companies are transferring advanced skills to local staff.”