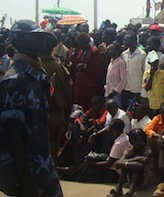 This is according to rights activists in the country.

“I have worked with many women and girls who have been abused. They are beaten by their husbands, raped by the rebel soldiers and they suffer in silence,” says Loise Joel, a human rights activist who runs the non-governmental organisation Human Rights for the Vulnerable, in Central Equatorial State in South Sudan.

In a civil war that lasted over 21 years, women and young girls have been the victims of the worst human rights abuses. And as South Sudan and the world celebrate the birth of a new nation, it is incumbent on the new government to speedily address the gross human violations to cultivate hope among the survivors. “Violence against women and girls is pervasive, devastating, and a tolerated problem in Sudan, a legacy of Sudan’s brutal civil war, during which it was commonplace. As violence increases in the region, so will rape and sexual abuse, yet assistance for survivors and prevention services are critically scarce,” says Susan Purdin, who oversees International Rescue Committee (IRC) programmes in South Sudan.

Violent conflicts continue to rage between North and South Sudan in the contested border states of South Kordofan and Abyei. But there are also internal threats to the safety of women and girls in South Sudan, including ethnic and tribal fighting, and even the Southern army, which is known for its use of excess force to wipe out rebels.

“Southern Sudan is being born into crisis. Widening violence is triggering more displacement, threatening the lives of vulnerable civilians and hampering access to communities in need while an existing humanitarian emergency grows worse,” Purdin says.

Anim Yei was abducted by rebel soldiers and forced to live in the bush for two years while the soldiers repeatedly raped her before she escaped. She says government should set up a tribunal to gather information on the extent of human rights abuses against women and to punish the perpetrators.

“It is dehumanising to talk about what happened to me and others who fall victims to violence in our country. The government should set up a commission where security of the victims is guaranteed so that we can speak out not fearing for our lives,” Yei says.

Yei is not the only one. Of the many women that Joel has worked with, most fear for their lives and do not report abuse.

“They have no avenues to report as they fear more violence from their husbands or the soldiers. Society also looks down on them. They need to be taught that these are human rights violations and that courts exist to prosecute the offenders,” Joel says.

A report by Leora Ward of IRC’s Women Protection and Empowerment Technical Unit, found that violence against women is highly prevalent in South Sudan and most victims suffer in silence. Almost 52 percent of victims of violence do not report the crimes. Psychological violence is the most reported at 31 percent, followed by physical violence at 29 percent.

According to the report, violence against women is also due to tribal clashes and cattle raiding.

“In the past, tribal clashes in the (Lakes State) region resulted in the burning of villages, displacement of families, rape and beatings. The killing of women and children may result in greater retaliation and higher death tolls,” Ward says.

Ward explains that men who are unable to pay high bride prices may rape women in order to marry them. She says that men are also angry about paying high bride prices and as a result treat their wives as property and may beat them out of anger and resentment.

The research notes that there is an overall lack of health services available to the victims and clinics cannot adequately respond to rape, unwanted pregnancies, STI and HIV infection.

Purdin says government should prevent, deter and respond to violence and threats against women.

“Enhancement of girl child enrollment in schools and youth skills development remain a focus programme that significantly contributes to stabilisation and peace building as many of the youth engaged in skills development are demobilised soldiers,” Abebe says.

* The final paragraph of the story has been changed by request of Plan International sources.