FREETOWN, Sep 12 2011 (IPS) - The six-year-old girl pulls her T-shirt up to show the dozens of pale lines across her back. They are fresh scars from the lashing she received from her caregiver after she lost 500 Leones, the equivalent of about 10 cents. 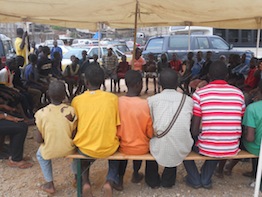 The burns on her hand are from when her caregiver stuck it in a fire. That time she had disobeyed, and then refused to submit to a beating.

The half-inch high bump on her head with a thick scar at its summit was from when her head was smashed into a wall. What she did to warrant that one, she is not sure.

She doesn’t know how she came to be given the huge lump above her elbow.

Every scar has its own story, says the warm-eyed social worker, to whose side the girl is glued.

But hers is not such a remarkable case, at a recently opened girls’ shelter in the teeming core of Freetown, Sierra Leone’s capital city.

This West African nation of more than five million is still recovering from the devastation of a decade- long civil war that ended in 2002.

Its government has signed various international agreements and passed its own Child Rights Act in 2007. The four-year-old legislation enshrines basic rights and provides for structures to enforce them.

But many argue those rights still exist on paper only.

Agencies tasked with enforcement are overwhelmed and under-resourced, while those providing shelter are unable to cope with the need. Deep-rooted traditions and near-universal poverty fuel the abuse of Sierra Leone’s children.

Theresa Ojong, a programme manager for Don Bosco Fambul, says government needs to take the issue seriously and provide for more advocacy, sensitisation – and people need to speak up.

“We have this culture of silence in this country,” says Ojong, whose organisation is a local branch of an international NGO that provides shelter, counselling and rehabilitation for homeless and vulnerable children in Sierra Leone.

“(The government) has to come out very strong because it is they who have the policies. They are only being talked about, but they are not being implemented.”

In its 2011 country profile, Amnesty International reported that Sierra Leonean children faced serious violations in many domains, citing child labour and inadequate government programmes to address the needs of youth such as war-affected children and orphans. Street children are particularly vulnerable to abuse, with little or no protection.

“The government failed to uphold and enforce its domestic legislation and to respect its international treaty obligations to protect children and guarantee their rights,” says Amnesty International.

Mariatu Bangura, Director of Children’s Affairs at the Ministry of Social Welfare, Gender and Children’s Affairs, says a number of provisions in the Child Rights Act are in place. Others are in the works; some are under amendment.

“We are really trying to enforce the Child Rights Act,” says Bangura. “It is to some extent working. Before now, we’ve been having a lot of abuse cases that have been swept under the carpet.”

The ministry, however, is allotted just 0.9 percent of the annual budget, and doesn’t always receive the full amount, says Bangura. Numerous international agencies contribute to the effort.

“As a ministry, if we could really get government commitment on that, that would go a long way.”

Sierra Leone remains near the bottom of the United Nations Human Development Index, with an estimated 70 percent of the population living on less than one dollar a day. The gross domestic product per capita in 2008 was 332 dollars.

In its African Report on Child Wellbeing 2011 by the Ethiopia-based African Child Policy Forum, Sierra Leone was ranked among the bottom eight African countries for its investment in child welfare.

Child abuse is referred to the Family Support Unit (FSU) of the Sierra Leone Police, tasked with investigating and prosecuting crimes such as domestic violence, sexual abuse and child trafficking.

About 40 units with 435 police personnel and 60 social workers service the country. They have five vehicles – on loan from the United Nations Children’s Fund – and some motorcycles to do it, says FSU head Aiesha Bangura.

In 2010, the FSU received more than 4,200 reports of sexual abuse and domestic violence. About 2,200 cases are under investigation and only half of those have led to charges being laid. There were 57 convictions.

Back at the girl’s shelter, the battered little girl speaks in a small voice, her hair braided straight up the sides of her head to the crown, where it splays out every which way.

The little girl’s mother died in childbirth, says social worker Yatta Thomas. One in eight women die as a result of pregnancy in Sierra Leone. The government launched an ambitious programme of free health care for women and young children last year in a bid to address one of the world’s highest rates of maternal mortality.

The girl was passed through various hands, ending up with an unwilling caretaker who had half a dozen mouths to feed and no means to do it.

She frequently lost her temper, beating them.

It’s a vicious cycle, of poverty and abuse, says Thomas.

At Don Bosco’s headquarters in Freetown, some 60 boys plucked off the streets go through a 10-month rehabilitation programme before, usually, reunification with families.

The NGO estimates there are some 2,500 children on the streets of Freetown, pushed from their homes by sexual and physical abuse, trafficking, hunger and other factors.

“The policemen, who are actually in charge of security and justice on the streets of Freetown, are sometimes guilty of the gravest human rights violations from brutal beating up to forced labour,” says the report.

Don Bosco takes a bus of food and nurses and social workers to a vacant lot downtown each evening where they host street boys who do not want to go to the shelter or for whom there is no room. The youths play games, get food, medical attention, and support.

One boy, who estimates he’s lived under market stalls for about five years, says he lost a family member’s money long ago and was too afraid to go home.

“I didn’t want to be beaten, so I decided to stay on the streets,” says the youth, who is perhaps 14.

He collects scrap metal and sells it for money, sleeping outside with a posse of other boys for protection from gangs, criminals, and police.

“It’s a hard life on the streets. The big criminal guys, older boys, attack us at night for our money,” he says. “If we have no money, they light plastic bags on fire and put them on us.

“Some of us want to go home. No one wants to stay.”