PUNO, Peru, Oct 13 2011 (IPS) - Dina Apomayta is heir to the 3,500-year legacy of the Andean cultures of Tiwanaku and Lupaca, which venerated the land. And she and many other rural women in Peru continue to nurture the agricultural biodiversity that has been handed down from generation to generation. 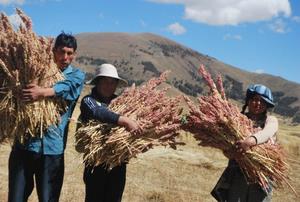 “We care for the land by organising ourselves in our work. As mothers, we participate in growing and storing food for our children,” Apomayta, a 36-year-old Aymara Indian, told IPS during a break in her work in Curitamaya, a village 42 km from Puno, the capital of the southern highlands region of the same name.

The fruits of the land in the Andes, like the hundreds of varieties of potatoes, corn, and quinoa – a highly nutritious seed native to this region – depend largely on women, who select the seeds, weed the fields and gardens, help harvest the crop, and preserve and store food.

“After we bring the harvest in, we separate what we’re going to use in our homes, for sale, and for seeds. This is something we know how to do,” said Apomayta, speaking with the casual air of a campesina or peasant farmer who has been raised to grow and preserve food since she was a girl.

The work of these native highlands women acts as a natural seed bank for the Andean region, built up over generations for the benefit of humankind.

But Apomayta and thousands of other campesinas like her do not know that the International Day of Rural Women will be celebrated on Saturday Oct. 15, and that the work she does day after day merits special recognition.

“Life in the countryside is hard,” she reflected calmly. “We have to deal with frost and hailstorms; it’s tough, but we pull through.”

In this South American country of 29 million people, roughly one-third of the population lives in rural areas, where 20 percent of women are officially counted as farmers but only 4.7 percent own title deeds.

However, the Food and Agriculture Organisation (FAO) reports that the proportion of women farmers is likely to be higher, because the agricultural work of women is under recorded.

A FAO report on women in agriculture, the environment and rural production in Peru says that women’s contribution to agriculture is widely underestimated, and that 52 percent of rural women are unpaid workers on family farms.

Jazmine Casafranca, who is responsible for FAO rural development projects in Peru, told IPS that the United Nations agency is providing technical expertise and assistance to the Peruvian government, to help it design a new agricultural census that would give greater visibility to the role of women in the countryside. The last census of agriculture was carried out 17 years ago.

“Women have the responsibility to make sure there is enough food to cook every day,” Casafranca said. “They don’t leave this up to the men; they are involved in the various stages of production, but this is sometimes not taken into account in public policies.”

The FAO official said the crucial role played by women is especially visible during the so-called “hunger season” from September to November – the gap between harvests, when food supplies fall.

There are many hurdles to overcome. Adverse climate conditions, the migration of men seeking better jobs elsewhere, and the departure of young people in search of better education have also changed the roles of rural women.

“More and more, women are assuming a stronger leadership role on the farms; it is often the women who have to look after the livestock and crops full-time, because their family members have gone off in search of new opportunities,” said Casafranca.

“And the situation is aggravated by severe climate changes,” she added.

Apomayta, who is a member of the town council for the district of Acora, told IPS that the FAO official’s description of the situation is accurate. But she also said women in communities like her own have managed to organise to face up to the difficulties.

“In Curitamaya we work as a group, with the community, to be prepared,” she said.

Casafranca said the capacity to organise witnessed in some rural communities should be seen as an opportunity to promote productive development linked with protection of biodiversity, respect for the environment, and participation by women, which also requires a commitment by both the government and the private sector.

This call by FAO is fundamentally in response to a context of rising global food prices, which have exacerbated food insecurity and poverty in the most vulnerable nations. In fact, the theme of World Food Day – Oct. 16 – this year is “Food prices – from crisis to stability”.

“Special recognition should be given to women and men who work to maintain this hidden treasure – the diversity of food that they preserve beneath the soil, which is alive thanks to their culture and their traditions,” Casafranca said.

FAO’s Globally Important Agricultural Heritage Systems (GIAHS) initiative has devised projects for Algeria, Chile, China, Kenya, Peru, Philippines, Tunisia, and Tanzania aimed at safeguarding sustainable agricultural systems characterised by a high degree of biodiversity, which have evolved over generations through the dynamic adaptation of farming communities to their specific environments.

In Peru, the area selected for the project was the Cuzco-Puno corridor.

The coordinator of the GIAHS project in this country, Alipio Canahua, explained to IPS that in Curitamaya, 40 hectares of “camellones” or raised ridges of soil surrounded by ditches to collect and conserve water have been rebuilt, reviving an ancient agricultural tradition.

Women are actively participating in the project.

The “machismo” that is widespread among Andean cultures, which often keeps women in a subordinate position and prevents them from taking advantage of opportunities, has nuances and cannot be seen as a blanket phenomenon, said Casafranca. “There is still a lot to be studied in this respect,” she added.

“Women have also gained a voice and vote; we have won that right little by little,” Depi Marca, the wife of the Curitamaya village head, told IPS.

Men, meanwhile, have learned to respect and value the work of women.

“Women can tell what each potato is good for, which ones are good for cooking, which are in good condition and which aren’t. And they are also good traders; they know,” Rafael Pilco, the head of the conservationists of native potato varieties in the community of Huama, in the southeastern Andean region of Cuzco, told IPS.

Some 200 native varieties of potato are grown in Huama, and the local farmers – men and women – protect them from pests and harsh weather, conserving a legacy that has been passed from generation to generation for millennia.