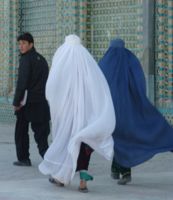 Yasmin’s case is one. Although the legal age for female marriage is 16 years, she was only eight when her family, in a remote area of Nangarhar province, arranged her marriage to a 60-year old man. After four unhappy years, Yasmin fled with a man she was in love with from her village.

When the couple was arrested for running away and marrying again, she was pregnant. Having her baby in prison, Yasmin has since been released. She has moved to a Kabul shelter, fearful that her family and first husband, now 70, will kill her to protect their honour.

“The first step we are planning for her is to get a divorce – she is 18 and has that right,” says Huma Safi, programme manager for Women for Afghan Women, an organisation that provides female shelters, legal and family counseling. “The second step is to arrange a proper marriage with the second husband who she loves. This marriage will decrease her husband’s sentence also. Then she will go and live with him.”

When the second Bonn Conference on Afghanistan convened on Dec. 5, Afghan women fought for a voice at the table, exactly one decade after the international community initially gathered in the German city to plan Afghanistan’s institutional road map with an emphasis on civil rights.

The priorities of Bonn II, within the context of a 2014 deadline for the withdrawal of international coalition forces, is the security transition, peace talks with the Taliban and future regional relationships.

The World Bank has warned of Afghanistan’s dependency on international aid – more than 90 percent of its 17.1 billion dollar national budget – and Bonn II is a marker for cuts in donor cash. Afghan women advocates worry their projects will be some of those hard hit.

Selay Gaffar from the Afghan Women’s Network (AWN), a national coalition of women’s organisations, had just three minutes at the conference to urge continued support of women’s rights. Bonn II’s concluding statement briefly linked gender equality to the Afghan constitution in governance and with peace negotiations.

Female activist have made an impact raising awareness of gender rights, and improving access to education and healthcare, mostly in urban areas. Women’s shelters have also been established, including for those released from prisons and now stigmatised from returning home, but the women in them say they don’t feel safe or have freedom of movement.

Despite these advances, a Thompson-Reuters poll released in June 2011 ranked Afghanistan as the world’s most dangerous country for women due to violence, poverty and lack of healthcare.

“From 2001 to about 2003 there was a lot of attention on women’s rights, and then it decreased,” says Huma Safi. “Our main concern is that we don’t want to go back to the situation we had 15 years ago. Not only during the Taliban, but also before the Taliban.

“During the Mujahedeen’s civil war a lot of women were raped,” she explains. “People then were so tired from war and we were forgotten by the international community.”

On the eve of Bonn II, President Hamid Karzai pardoned Gulnaz, a 21-year-old rape victim sentenced by an Afghan court for adultery, who bore a child in prison from the rape.

But the presidential pardon in the high-profile case of was an anomaly; the majority of the roughly 700 women in Afghanistan’s variously overcrowded and squalid prisons are convicted for crimes of adultery or “zina” (sex outside marriage), usually their punishment for running away from forced marriage or chronic abuse. Many have their children jailed with them.

“There are two main types of cases, with plenty of variation, you hear over and over again,” explains Heather Barr, a researcher with Human Rights Watch. “One is usually young girls about to be forced into a marriage against their will who run away to avoid it. Sometimes on their own, or sometimes with a man who helps them, but not who they are romantically involved with.

“Another category are women who have married someone almost always against their will, and there is abuse at home,” she says. “Usually physical abuse, sometimes just cruelty, and they run away. These often turn into zina cases because there might be a man accompanying them.”

Barr says that while all the women she interviewed had defence attorneys, the quality of representation appeared poor, and the trials lack investigation and proof. “Sometimes a man manages to bribe his way out, but the woman does not,” she adds.

“Zina is in the penal code, but running away is not. When I talked with judges or lawyers about this, they say that by running away the woman are at risk for zina.”

A large part of the population still relies on traditional mechanisms within communities to resolve disputes outside of the formal court system, Human Rights Watch says.

In 2009 President Karzai signed the Shia Family Law, which included provisions for 14-year-old girls to marry, and for married men to forcibly have sex with their wives. After an outcry by civil society and the international community, the Shia legislation has been amended.

The same year, the Afghan government enacted the Elimination of Violence Against Women (EVAW) law which criminalised acts like early or forced marriage and rape.

A United Nations analysis of its implementation last month says, “Judicial officials in many parts of the country have begun to use the law – but its use represents a very small percentage of how the government addresses cases of violence against women.”

Female victims like Zuhra continue to get blamed. Living in Kabul, she was 12 years old when she was married to an older man who already had three wives. He forced her into a daily living of prostitution until their house was raided. After her arrest and two-year prison sentence, she is now 17 and living in a shelter.

“We got her a divorce, but now she wants to marry again. We are trying to make her understand she has time, there is no rush,” says Huma Safi. “I cannot blame her when you are out of prison, the only option they are thinking is if you have a husband you are protected.”

*Names of women have been changed to protect their identities.