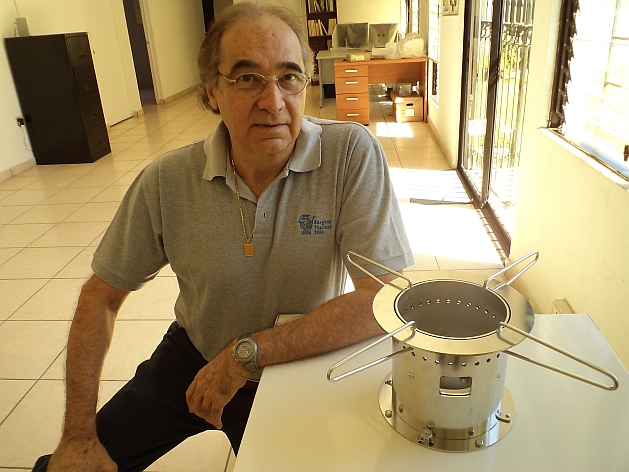 René Núñez is thrilled that NASA considers his invention the best stove in the world. Credit: Edgardo Ayala/IPS

SAN SALVADOR, Jan 11 2012 (IPS) - In his quest to make the most efficient possible use of energy generated through wood combustion, Salvadoran René Núñez developed a simple but highly efficient wood stove that produces no smoke and reduces greenhouse gas emissions by 95 percent.

A whole meal can be cooked on a Turbococina or “Turbostove”, as he dubbed the device, using just five small pieces of wood around 13 cm long, which can be easily obtained from tree pruning.

The Turbococina is not a new invention. Núñez developed a prototype 16 years ago, and since then, the professor, electrical engineer and inventor has continued to work on perfecting it. In 2010 he achieved a thermal efficiency rate of 93 percent and a 95 percent reduction in carbon dioxide emissions. Prior to that, he had already managed to eliminate nitrous oxide and carbon monoxide emissions.

The cook stove works on the principle of low-temperature combustion, resulting in a drastic decrease in consumption of firewood, a vital resource for poor families in El Salvador and many other developing countries.

“By replacing traditional wood stoves with Turbococinas, what families spend on firewood in one day would last them for a whole month,” Núñez stated in a presentation in his native El Salvador in 2005.

The stove is comprised of a stainless steel cylinder fitted with 10 air injectors, an internal fan that runs on electricity, and a steel plate that regulates the amount of air entering or leaving.

The Turbococina has earned numerous awards over the years. The most recent was in November, when it was selected along with nine other energy innovations from around the world to participate in LAUNCH 2011 Energy Innovators, an initiative sponsored by the United States Agency for International Development (USAID), the U.S. Department of State, the U.S. space agency NASA, and sportswear company Nike.

“For NASA to say that it is the best stove in the world is worth a great deal to me,” Núñez told Tierramérica.

Comparatively speaking, other “improved” wood stoves have not managed to reduce carbon dioxide emissions by more than 45 percent, he noted.

According to official statistics, almost 400,000 families in El Salvador cook with firewood or over open fires, representing 25 percent of the population of this Central American nation of six million people. Smoke-filled homes are an everyday reality in rural areas, where relatively few people have gas-powered or electric stoves.

“Firewood consumption not only represents a considerable proportion of household expenditure, but in addition, many households devote a significant amount of their time to gathering it,” the report says.

Added to this are the respiratory illnesses caused by smoke from burning wood. This is the cause of death for some 2,000 people every year in El Salvador, said Núñez, based on figures from the Ministry of Health.

The inventor’s main goal is to decrease the use of conventional wood stoves in El Salvador, which is one of the most highly deforested countries in the hemisphere.

But low-temperature combustion also has a number of other potential uses, from industrial and domestic stoves and ovens to water heaters, water purifiers, milk pasteurisers, steam-powered generators and thermoelectric power plants.

Despite its many merits, however, the Turbococina faces a major obstacle in terms of widespread use in poor rural areas. The main problem is that it requires electricity to operate the internal fan, which moves air into the combustion chamber, explained environmentalist Ricardo Navarro of the Salvadoran Centre for Appropriate Technology, affiliated with the Friends of the Earth international network.

The government should actively promote not only the Turbococina but also other alternative cooking methods, like solar-powered stoves, Navarro commented to Tierramérica.

For his part, Mauricio Sermeño, coordinator of the Salvadoran Ecological Unit, told Tierramérica that the inventor himself should step up his efforts to popularise the device.

The Turbococina is not sold in any stores, because Núñez has no interest in turning his invention into a business venture. He is looking for the best mechanism to distribute the stoves free of charge to the country’s poorest families and communities.

His goal is for 100,000 Turbococinas to be distributed under these conditions, and is negotiating the final details to determine which institution or mechanism is best suited for this purpose.

The Ministry of Education has purchased 1,050 of the stoves and distributed them to 800 schools as part of a program that provides students with a free snack every day.

But over the last 16 years, the successive governments that have held power in El Salvador have showed no interest in the widespread distribution of the Turbococina. “There is apparently no government support for alternative energy initiatives,” concluded Sermeño.

* This article is part of a series supported by the Climate and Development Knowledge Network (CDKN) http://cdkn.org/. The writer is an IPS correspondent.