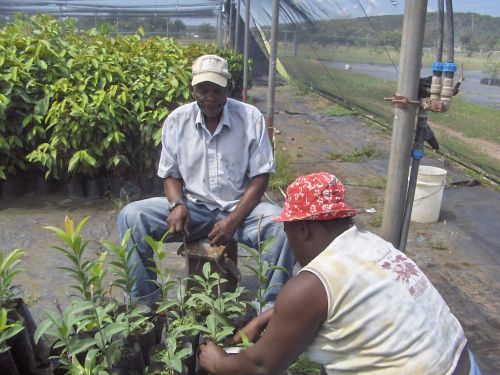 KINGSTON, Mar 26 2012 (IPS) - Like its Caribbean neighbours, Jamaica is looking for outcomes that will address its food security challenges when world leaders meet in Rio de Janeiro for the United Nations Conference on Sustainable Development Jun. 20 to 22.

World Trade Organisation (WTO) rules have opened up Jamaica’s small economy to cheap imports of everything from vegetables to fish, meats and juice concentrates, virtually crippling the island’s agricultural sector.

The document articulates the regional body’s call for decisions that will address a slate of problems, including the erosion of markets caused by the application of WTO regulations and the difficulties of establishing green economies.

Due to their size, member states have had “severe structural handicaps in integrating into the global economy”, the document stated.

The loss of preferential European Union markets for bananas, sugar and citrus has left Jamaica and other small regional producers struggling to prevent devastation of their local agriculture.

Severe weather, disease and pest infestation are also making it harder for this northern Caribbean island to cope.

In addition to severe dislocation in some agricultural sub-sectors, there are concerns that the Huanglongbing, also known as citrus greening disease, could wipe out local citrus.

And according to industry reports, infestation by the coffee berry borer slashed the 2010/2011 Blue Mountain Coffee crop by as much as 50 percent. Meanwhile, the black sigatokavirus is hampering the recovery of the banana industry.

A debt burden that runs at roughly 131 percent of its gross domestic product means Jamaica has no cash to provide the kind of bailout farmers need to solve their many problems.

CARICOM is looking for decisions in Rio that will prioritise the needs of small states in matters of trade, as well as provide assistance to adapt to climate change and achieve green economies.

There is need, the regional body noted, for a recommitment to the promises made to small island states to level the playing field of international trade.

Agriculture Minister Roger Clarke is aware of the challenges. But even as he engages the nation’s farmers in a bid to increase production and reduce the food import bill estimated at 800 million dollars in 2011, Clarke is mindful of his government’s limitations.

“We will do whatever we can, but whatever we do must be within the limits of the budget,” he cautioned farmers at a recent meeting.

Despite increasing demand, production in traditional crops continues a downward trend. In 2008, Jamaica ceased banana exports. This follows a 32-percent drop in banana production due mainly to the impact of adverse weather. In December, limited exports to the Caribbean began again.

Between 2002 and 2010, a combination of bad weather and diseases reduced citrus production by 14 percent. Over the same period, imports of subsidised milk solids from the European Union forced a 37-percent decline in milk production; and there were 45 percent fewer fishponds, causing a virtual collapse of the inland fish- farming sector.

Neglect means production of the coveted Blue Mountain coffee crop is at the “lowest since Hurricane Gilbert in 1998” despite an injection of 336 million dollars by government and rising prices, Director General of the Coffee Industry Board (CIB) Christopher Gentles told IPS.

“Farmers are neglecting the trees because of low prices and they are afraid there is no market for the crop,” he said.

Gentles told IPS that the lack of enthusiasm is directly related to the global economic meltdown, which slashed farm gate coffee prices by half, and the intensive labour required to control the coffee berry borer.

Elsewhere, disease is creating shortages and pushing up prices.

According to Citrus Growers’ Associations’ (CGA) technical director Dr. Percy Miller, the price for orange juice concentrate has increased almost three-fold, and the price of solid fruits has gone up by more than 40 percent.

“Farmers are not able to take advantage of the higher costs because citrus greening is reducing the amount of concentrate and number of fruits on the international market. The closure of local citrus nurseries also means there are no replacements for dying trees,” he told IPS.

Only 30 months ago, more than 220,000 gallons of juice concentrate remained in local warehouses awaiting buyers, while more than 150,000 gallons were imported, leading farmers to condemn import policies.

Food security means that a nation is able to provide sufficient food and related services in a way that is economically efficient , profitable and socially responsible. But even with increases in vegetable crop production, current trends indicate that Jamaica’s reliance on the soil could compromise its food supply.

Agriculture is Jamaica’s single largest employer, providing more than 180,000 jobs. Traditional crops like sugar, coffee, bananas and citrus are not only major employers but also some of the largest foreign exchange earners.

Even with low costs loans and limited help from government and donor agencies, sector leaders concur that getting farmers to make significant reinvestments will depend on how effectively authorities are able to stimulate farmers’ interests.

Assistance to small farmers to acquire new technologies, as well as access to affordable pest and disease controls are also crucial.

There are efforts to reintroduce crops like corn, and grow under- performing sectors. Former dairy turned fish farmer Donny Bunting is among a growing number of farmers who have invested in sheep because, he says, “There is a market and I don’t know anything else but farming.”

The group is working with the U.N. Food and Agriculture Organisation (FAO) and the Caribbean Agricultural Research Development Institute (CARDI) to improve goat herds and grow the sector to provide 50 percent of local demand within five years, King said.

The FAO is also training technicians to provide pathogen-free planning material in a bid to save the 42-million-dollar industry. Two years ago the Jamaica Citrus Protection Agency closed citrus nurseries to prevent the distribution of contaminated planting material.

The European Union also joined forces with the FAO to support activities that resulted in recent increases in non-traditional food and vegetable crop production. Under the FAO’s Initiative on Soaring Food Prices and the two-year European Union funded Food Security project, small farmers were given new technologies and provided with seeds, fertilisers and tools.

Many of the interventions only provide short-term fixes to ongoing problems. Goat farmers have been down this road before. Now, according to King, they are seeking cheaper, sustainable sources of feed.

Agriculturalists agree that salvaging Jamaica’s agriculture will depend on how effectively authorities are able to stimulate the farmers’ interests in reinvesting. In the absence of agricultural insurance, there must also be effective and sustainable programmes to assist farmers who have been affected by bad weather.

Farmers suggest that the introduction of new technologies, sustained and funded vector and pest control methods and a robust system to curtail poaching may help to turn their fortunes around.

*This article won the New Media Category in the 2012 CARDI-CTA Regional Media Awards on Climate Change.