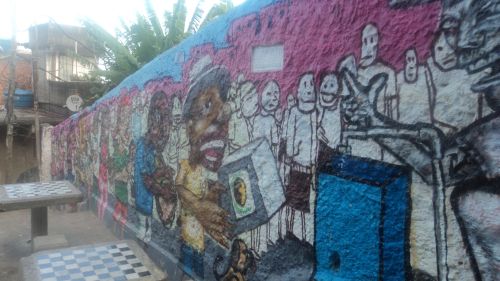 RIO DE JANEIRO, Apr 20 2012 (IPS) - The history, daily life and folk artistry as well as spectacular views of this southeastern Brazilian city are all part of a living museum created by community leaders in a favela that is displaying its cultural heritage as well as its wounds.

“At one time, before there was electricity in the favela (shantytown), the local people would come out on the street at night to talk to each other by moonlight,” Rita de Cassia Santos Pinto told IPS, seated in front of a mural that is part of a series painted on the walls of local houses.

As a journalist, Santos Pinto says she doesn’t normally like to be interviewed. But when the topic is the history of her community, she is enthusiastic and her words flow freely. As we tour every corner of the Morro do Cantagalo favela’s crowded dwellings clinging to valleys and hillsides, the walls and houses also start to speak.

One mural depicts the history of samba, the musical genre that originated in the favelas; another shows episodes from the 1964-1985 military dictatorship against the backdrop of bare brick, tin-roofed dwellings.

The series of more than 20 murals by graffiti artists from Cantagalo and other parts of Rio de Janeiro tells the story of the community in colourful pictures.

The houses-cum-canvases are on the circuit of a fee-paying tour of the favela which includes, depending on the interests of the tourists, kite-making and -flying workshops, lessons on playing the “cavaquinho” (an instrument similar to the ukulele and the key to producing rhythm and harmony in Brazilian samba and choro music), visits to stores selling arts and crafts, and local eateries.

“We want to break down the barriers of national museums that only exhibit the works of famous artists,” said Santos Pinto, who as well as being a reporter is a tour guide, social facilitator, “curator of memories”, and one of the community leaders who founded the Museu de Favela (MUF – Favela Museum).

The first ever all-encompassing favela museum seeks to depict and value the identity of Cantagalo’s 20,000 people on the basis of their own accounts of their lives, and to integrate them into the society that has kept them at arm’s length for so long.

From the impoverished Northeast to the favela

One of the posters on display at the MUF – part of an itinerant collection which is also touring traditional museums in Brazil – tells the story of Santos Pinto’s parents, who are now in their eighties, in their own words.

Her father, Feliciano da Silva Pinto, a migrant from the northeastern state of Bahia who worked in the city of Rio de Janeiro as an electrician, fell in love with Eunice Santos whom he used to see coming down from the “morro” (hill) every day to fetch water and carry it home in a jerry can on her head.

“To win her heart, he started giving her water himself,” to shorten her journey, Santos Pinto said, breaking into laughter.

This is one of many stories about the migrants from poor areas of the country who built the humble dwellings in Cantagalo, now numbering 5,300, that are connected by what seems to the outsider to be an endless and unfathomable maze of alleys and steep stairways.

An elevator, recently constructed under the Growth Acceleration Programme (PAC) launched by the left-wing government of former president Luiz Inácio Lula da Silva (2003-2011), now eases the climb and saves favela residents and visitors over 60 metres of climbing, up hundreds of steps.

“Everybody’s memories are worth recording,” said the journalist, who takes down people’s oral histories to try to reconstruct the earliest history of the favela and “give a voice to those who have never had one.”

The history of Cantagalo and two adjacent favelas, Pavão and Pavãozinho, which have merged into one complex, is bound up with the origins of Brazil’s major cities, and includes fugitive slaves hiding in the Cantagalo hills, as well as the flimsy shacks built in the first decade of the 20th century by migrants from poor regions seeking work in Rio.

The trio of favelas grew up as an enclave between Ipanema and Copacabana, upmarket residential districts of Rio that are a tourist magnet for visitors, where the grand houses and skyscrapers have often been built by poor and illiterate migrants like the parents of MUF cultural director Marcia de Souza.

Souza described another of the museum’s initiatives: every year 12 “warrior women” are elected from the favela, women who “overcame difficulties in their lives, like violence and educating their kids, and who, even if one of their children was in prison for drug trafficking, managed to save the rest of their family and keep them away from violence and drugs,” she told IPS.

The symbolic prize for these women is the celebration of their lives, which are reconstructed on the walls through photographs, personal objects and stories.

The Cantagalo-Pavão-Pavãozinho group of favelas used to be one of the most violent areas in the south of Rio de Janeiro, with daily shootouts between drug trafficking gangs, until three years ago when police pacification units (UPP) were introduced as part of a campaign to increase security, improve infrastructure and implement social programmes.

MUF was founded as an independent community NGO in 2008, before the arrival of the UPPs, and according to its founding members its early days were an uphill struggle.

Now their complaint is the lack of public funding for their initiative, and they are seeking individuals and organisations or agencies willing to invest in what they describe as their vision of the future.

The museum’s supporters see its future as a collection of open-air galleries, “whose stakeholders will be the residents themselves, who contribute the walls of their homes, their knowledge and their activities.”

The idea is to transform Cantagalo-Pavão-Pavãozinho into a significant tourist attraction in Rio, a must-visit “monument” to the history of the favelas, the cultural roots of samba, the culture of Afro-Brazilians and of migrants from the Northeast, and the visual and performance arts.

In that spirit, architects and architecture students from other Brazilian states, and from Argentina and France, are participating in the activities of the living museum.

The group of architects is planning interventions to improve areas of the favela. The solutions need to be creative and inexpensive, such as the installation of a giant screen for projecting movies for the community to be located on the MUF rooftop, which also houses a large water tank.