NIAMEY, Apr 10 2012 (IPS) - Bitterness is written all over Boureïma Hamado’s face as he prepares to return home after selling his onion crop at the Katako market in the Nigerien capital, Niamey. He’s taken a big loss on the harvest. 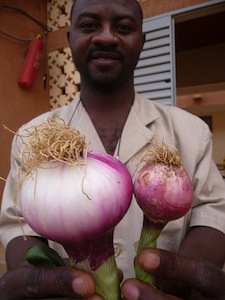 Onion producers in Niger face huge problems selling their crop because the market is saturated. Credit: Sustainable Sanitation/CC BY 2.0

Hamado, 35, tells IPS he brought 20 sacks of onions – 140 kilos in total – to Niamey hoping to sell them for a good price, which would have allowed him to settle his debts with something left over for basic needs.

“I bet on high profits from onions – which were selling for more than 25,000 CFA (50 dollars) a bag last year – and increased my production, but I didn’t account for a glut on the market,” he says.

Around 300,000 Nigerien farmers grow onions, generating revenue equivalent to around 100 million dollars a year, according to a Niamey-based smallholders’ organisation, the Federation of Market Garden Cooperatives of Niger (FCMN-Niyya).

This year, onion producers face huge problems selling their crop because the market is saturated, according to FCMN-Niyya president Idrissa Bagnou.

“There was a bumper harvest because farmers have become more professional, have had better access to seeds, and the total number of farmers has gone up. Unfortunately, consumption has not also increased, either locally or in the countries to which our produce is usually exported,” Bagnou told IPS.

“Foreign traders, who usually buy onions throughout the year, hadn’t finished selling off stock harvested in September 2011 from Agadez (in northern Niger) when the December-February crop from other parts of the country came onto the market,” he said. “That’s where the steep fall in the price has come from.”

With an average annual production of 500,000 tonnes, Niger is the leading producer of onions in the West African Economic and Monetary Union area, according to figures from PRODEX, the Agro-Pastoral Export and Market Development Project, based in Niamey.

“Output, more than 70 percent of which is exported to Côte d’Ivoire, Ghana, Benin and Togo, has shot up this year, thanks to the sharp rise in the price of onions last year – they sold for up to 100,000 CFA (200 dollars) a bag at one point during the 2010-2011 season,” Dr Idé Tahirou, who monitors the onion market for a U.S. NGO with an office in Niamey, International Relief and Development, told IPS.

“It’s this sudden spike in the price which pushed many smallholders to plant onions,” said Tahirou. FCMN-Niyya estimates that this year’s harvest will be over 600,000 tonnes.

Elhadj Amadou Dan-Rani, an onion exporter in Niamey, explained that farmers also face competition from further afield. “Our customers in neighbouring countries still have large stocks of onions, originating not only from Niger but from Burkina Faso, Mali and even a European country like the Netherlands. That’s why exports have slowed.”

While onion producers are in turmoil, consumers are delighted. “In 15 years, I have never seen the price fall so low,” Fatouma Harouna, a Niamey restaurant owner, told IPS.

Tahirou said the high prices last year were simply due to a temporary shortage. He estimated that the price of a 12-kilo sack of onions in normal times is around 40 dollars.

Responding to the problem, the government met with stakeholders in the onion sector in the central town of Tahoua in early March to look at ways to help distressed producers and to better organise the commercialisation of the crop.

Abdoulsalam Douma, an expert at FCMN-Niyya, says one short-term solution would be for the government to buy part of this year’s harvest directly, paying producers at least 40 dollars a bag.

“But above all,” Douma said, “what’s needed are loans to smallholders to build storage facilities, and the establishment of offices to coordinate commercialisation in all the onion-producing areas and allow farmer associations to better organise their sales over time.”