Where Men Now Fear to Tread

UMOJA, Kenya, Apr 4 2012 (IPS) - No man, except for those raised here as children, lives in Umoja village in Kenya; one has not for two decades. It is a village only of and for women, women who have been abused, raped, and forced from their homes. 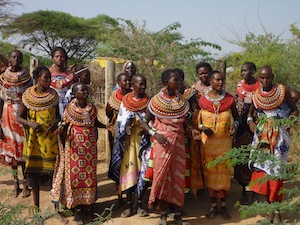 No man, except for those raised here as children, lives in Umoja village in Kenya. Credit: Hannah Rubenstein/IPS

In the culture of northern Kenya’s Samburu district there is a saying: “Men are the head of a body, and women are the neck.” The neck may support the head, but the head is always dominant, towering above.

But in this remote village, located in the grasslands of Samburu district, this mantra does not ring true. In Umoja, as one female resident says, “We are our own heads.”

Umoja, which means “unity” in Swahili, holds a unique status in the country: it is a village populated solely by women. For more than two decades, no men have been permitted to reside here.

The rule is one of the requirements of a community that has fought against overwhelming odds to become a place of refuge for women. It is a sanctuary where men – who have been the cause of so many problems for these women – are simply not welcome.

In the 22 years since its founding, the village has had a significant impact not only on the women who choose to call Umoja home but within the communities that surround it. The example that Umoja has set, coupled with the outreach efforts of its residents, has touched the lives of women in the region.

Celena Green, who is the Africa programme director for an organisation called Vital Voices that works with the women of Umoja, told IPS: “The existence of Umoja has allowed women’s groups in other surrounding villages to learn from the empowerment and pride of the Umoja women.”

Women from nearby communities attend workshops in the village that are aimed at educating women and girls about human rights, gender equity, and violence prevention. When the women return home, Green explained, “they begin to change the culture, demanding a safe, violence free community where women and girls are valued and protected.”

“Ideally, no woman or girl should ever have to flee her home to come to Umoja in the first place,” she added. “But ultimately, the aim of Umoja is to provide an emergency safe haven for those women who are in distress, and more importantly to contribute toward building communities where everyone is valued and can succeed.”

Umoja’s history began in 1990, when a collective of 15 Samburu women, who called themselves the Umoja Uaso Women’s Group, began selling beadwork and other goods to raise money for themselves and their families. As the group began to grow financially lucrative, they found themselves facing increasing harassment by men in their communities who felt that economic growth was not appropriate for the women, who traditionally play a subordinate role.

In response, the women, led by matriarch Rebecca Lolosoli, decided to break away and begin their own village, in order to ensure security and cooperation for themselves out of the reach of those who sought to undermine them.

Today, Umoja is home to 48 women who have come from all over the country. Their stories vary – some were young girls fleeing forced marriages to old men, others were raped or sexually abused, and several were widows who were shunned by their communities. Moreover, several women residing in the village are Turkana, taking refuge from the tribal violence currently raging in the central region of Isiolo.

The villagers, who rely on the sale of beadwork and profits from a nearby campsite and cultural center, pool their funds as a collective to support themselves. In addition to providing food and basic necessities for village residents, profits are used to cover medical fees and the operation of a school that serves both the village’s children and its adult women who wish to learn basic skills and literacy.

Nagusi Lolemu, an older woman with delicate hands and a melodious voice, is one of the village’s original founders. Sitting in the shade, her nimble fingers string red beads deftly in one fluid, unthinking movement, as she speaks rapidly in Samburu.

Lolemu’s story echoes a recurring theme in the village: she was widowed after years of marriage and subsequently rejected by the community she called home. “There were too many single women,” she explained to IPS through a translator. Single women, who are not permitted to hold property in Samburu culture, and generally are not educated, are viewed as a financial drain on the community. When her husband passed away, she was no longer welcome in her home.

Nagusi, who has been living in Umoja for 22 years, has two grown children. She does not question her decision to leave her home for Umoja.

“My children are educated, working, and giving back to the family and the community,” she told IPS. “In a regular village, this could not happen.”

In her village – like any other traditional community – there is little opportunity for women’s education and the consequential financial benefits it brings, she explained. Her daughter would have grown up as she did, illiterate and dependent on men for all her basic needs.

Green echoes this statement, explaining to IPS: “In a traditional village, women may not have had the opportunity to exercise leadership, to be in control of their wealth or resources, and they would more likely experience domestic violence, female genital cutting, child marriage and other traditional practices that discriminate against and physically harm women and children.”

In addition to barring men from residing in the village, the women of Umoja live by a set of self- imposed rules, which, as Lolemu explained, are based on ensuring equality and mutual respect within the village.

Residents are required to wear the traditional clothes and intricate beadwork jewelry of their people at all times, in order to preserve and promote their cultural heritage. The practice of female genital mutilation is not permitted. And the only males allowed to sleep in the village are those who have been raised there as children.

One of the most striking aspects of Umoja is the women’s attitude towards men. In a place where men have been the root cause of so many hardships, and, in most cases, the reason the residents fled their homes, it is tempting to think that the victims want nothing more to do with them and are happy to live the rest of their lives surrounded by other women. This is not the case at all – in fact, most of the younger women in the village plan on marrying and raising families.

The difference is that they are going to do it on their own terms.

Judy, a 19-year-old resident who fled an arranged marriage to a much older, polygamous man five years ago, is planning on getting married some day. She dates – outside the confines of the village, which is not only permitted but encouraged by the older residents – and is raising a six-month-old named Ivan, who squirms and coos in her arms as she speaks. One day, she will marry and leave Umoja for her husband’s village. But, until then, she is happy here.

When asked if there is anything she misses from her previous life, any element of living in a women’s- only village that she finds lacking, she laughs.

“No. Here we have everything,” she says, and smiles.

In Umoja, women are not only their own “heads” – each is her entire body.