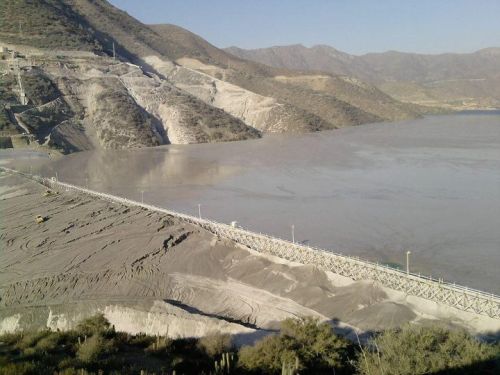 SANTIAGO, Jun 14 2012 (IPS) - People in the small town of Caimanes in northern Chile will suffer severe health problems if water pollution produced by a tailings dam built by the Los Pelambres mining company is not cleaned up, experts warn.

Ironically, the Minera Los Pelambres has accused local residents who complained about the situation of creating a spurious conflict for private gain. The case comes to trial on Jun. 28.

“These are crimes against the local cultural heritage and society which violate human rights, and the state is responsible for failing to guarantee access to clean drinking water for the people of Caimanes and for letting a company expose them to lethal danger,” Patricio Bustamante, an archaeoastronomer who studies the astronomical beliefs and practices of ancient civilisations, told IPS.

Bustamante said the company’s copper mining operations in Valle del Choapa, 250 km north of Santiago, has had a negative impact on the community and has caused enormous losses to the local heritage, as 140 archaeological sites have been dug up and 500 stones bearing 2,000 engravings have been moved from their original positions.

But the worst thing, in the view of experts, is the construction and operation of the El Mauro tailings dam higher up in the Andes mountains. Seven kilometres long and 270 metres high, it is the largest toxic chemical dump in Latin America.

El Mauro, which means “place where water springs from” in a local indigenous language, is located eight kilometres upstream from the town of Caimanes.

According to studies by Bustamante, the tailings dam has not only destroyed the source of the Pupío brook, but has also caused the loss of groundwater, biodiversity and the last remnants of canelo (Drimys winteri) and white Chilean myrtle (Luma chequen) forests on the planet.

It is also a serious hazard to people living in the surrounding areas. If the dam were to collapse, people would have barely five minutes in which to escape to higher ground, but there is no early warning system.

What makes matters worse is the rate at which the tailings reservoir has been filled, taking only four years instead of the planned 25, with a mixture of toxic waste and water welling up from the ground.

The most important study on water pollution in Caimanes was carried out in November 2011 by Dr. Andrei Tchernitchin of the state University of Chile, who found high concentrations of toxic metals in several water courses.

Based on these results, the scientist collected more samples. In analyses carried out in February 2012, he found manganese levels in a puddle a few centimetres above a stream that were much higher than international standards.

“This is extremely serious, because it means groundwater is being polluted quite near the town, a couple of kilometres away from the tailings dam, and the reservoir contents leaking out there are polluting not only the groundwater but also the brook,” he said.

He added that groundwater pollution could continue for five or 10 years, at which point drinking water would become contaminated.

He warned that if contamination continued at this rate, there would be serious consequences for the health of the local population. “Long-term exposure to manganese causes central nervous system diseases like psychosis, parkinsonism and dementia,” he said.

Tchernitchin, head of the Chilean Medical Association’s Commission for Health and Environment, said more research is needed, but stated that it is imperative “to compel the company” to clean up the water, even if this “is expensive, because I assume that whoever pollutes must take responsibility for cleaning up.”

He said he found it “strange” that samples taken by the company did not contain any of the pollutants found in his studies.

Minera Los Pelambres, which has been operating in the area for 10 years, belongs to the Luksic family, the wealthiest in the country and one of the richest in the world, according to Forbes magazine.

Back in 2006, the courts ruled in favour of the Caimanes community, in a trial that confirmed the pollution that the company is now denying. But a 25 million dollar settlement, divided between the owner of a large estate, Fernando Dougnac, a lawyer who had represented the community, and a group of local leaders, made it possible for the mining company to continue building the tailings dam.

Later, with a new team of lawyers, another lawsuit was brought against the mining company, local leaders, and the community’s previous attorney, for corruption. At the same time, 11 community members went on a hunger strike for 81 days.

In a counter-accusation, Minera Los Pelambres filed charges against the president of the Caimanes Defence Committee, Cristián Flores, and its lawyers for conspiracy and corruption. The mining company alleges that the committee is artificially stirring up a conflict with a view to financial gain.

“The difficulty is that the Minera (Los Pelambres) has brought lawsuits that are being investigated by a single prosecutor, who has never examined the company’s operations, yet upheld an accusation so baseless that even the police reports say there is nothing in it,” Sandra Dagnino, one of the lawyers accused by the company, told IPS.

She finds it inconceivable that the judge will not consider the report by Dr. Tchernitchin, endorsed by the University of Chile and the Chilean Medical Association, as valid evidence.

The trial, in which the defence will present close to 80 witnesses and Jean-Paul Luksic is expected to testify, was scheduled for Jun. 7 but has been postponed until Jun. 28.