UNITED NATIONS, Jun 12 2012 (IPS) - When world leaders endorse the final plan of action, titled “The Future We Want, at the Rio+20 summit in Brazil next week, a lingering question may remain unanswered: how best can the United Nations transform political platitudes into economic realities?

As the 193-member Preparatory Committee (PrepCom) continues its final round of negotiations through Friday in Rio de Janeiro this week – and perhaps beyond, if the current deadlock continues – there are several proposals already on the table for institutional reform or the creation of new bodies. 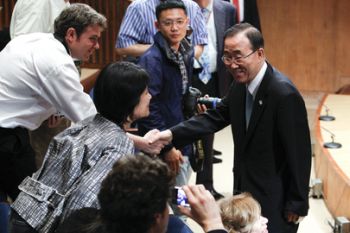 These proposals include strengthening of the existing U.N. Environment Programme (UNEP) by upgrading it to a full-fledged U.N. agency; establishing a Global Economic Coordination Council; creating a Global Sustainable Development Council and the granddaddy of all, the establishment of a mega World Environment Organisation (WEO).

The WEO, a longstanding proposal which has been kicked around the U.N. system for over two decades, was resurrected last week by French President Francois Hollande.

He said a WEO, “like the World Trade Organisation (WTO) or the International Labour Organisation (ILO),” would contribute to the success of Rio+20.

“This architecture must promote a better integration of the three dimensions of sustainable development: economic, social and environment protection,” he said.

He said it must also address new and emerging issues, review the sustainability of progress achieved, and monitor the implementation of the commitment.

Last week, Secretary-General Ban Ki-moon also reiterated the “need for a new institutional framework to support our shared sustainable development goals (SDGs) – an effective body that can track their progress”.

This body, he said, should have both high-level political engagement, and space for civil society, local authorities and the private sector to contribute their knowledge and expertise.

The United Nations has already begun to organise for the post-2015 challenge and opportunity, which that will closely follow the targeted date, 2015, for the achievement of the Millennium Development Goals (MDGs) and the beginning of SDGs.

“I have asked the heads of the U.N. Development Group and the Executive Committee on Economic and Social Affairs to mobilise the entire U.N. system behind this effort,” he added.

For starters, he announced last week the creation of a new post of assistant secretary general to oversee the post-2015 implementation of SDGs: Amina J. Mohammed of Nigeria will be Ban’s special adviser on post-2015 development planning.

An adjunct professor at Columbia University, New York, she has also served as the senior apecial assistant to the president of Nigeria on the MDGs.

In his detailed proposals for a sustainable global society, Daisaku Ikeda President of the Tokyo-based Soka Gakkai International, has called for the establishment of a new international organisation through the merger of U.N. agencies in the fields of the environment and development.

A global organisation for sustainable development should be the outcome of a bold, qualitative transformation of the current system along the following lines: the consolidation of relevant sections and agencies, including the U.N. Development Programme (UNDP) and UNEP.

“We need to develop the institutional capacity to implement comprehensive responses that prioritise the actual and expressed needs of people and build the foundation for lives of dignity,” he added.

At present, he pointed out, both UNDP and UNEP are structured so that only those states that are members of the respective governing councils can have a final say in decisions.

“In light of the importance of sustainable development and the wide range of issues and sectors involved, we must ensure that all states that wish to may participate in full,” Ikeda added.

Chakravarthy Raghavan, a veteran journalist who has covered the U.N. both in New York and Geneva, told IPS the idea of WEO, or UNEP becoming a separate agency, has been around since 1992.

A new agency, of course, means more posts, and if funded like UNDP, means more control from the North, and more money spent.

And once any agency is created, the fundamental law of politics kicks in: governments decide on policies, and create institutions to carry them out, he said.

“Very soon, those in the institutions attempt to change the policies to suit their interests and needs,” said Raghavan, who also covered the 1992 Earth Summit in Rio de Janeiro.

“But it is not clear what is the value added; the U.N. charter envisaged the Economic and Social Council (ECOSOC) to undertake a supervisory and coordinating role.”

That has long fallen into disuse, and its meetings now only enable agency heads to come and deliver long perorations, and “questions” from the floor, that more often than not get no answers, he added.

Raghavan said that Agenda 21, which was adopted at the Earth Summit, also referred to institutional arrangements for a followup.

“The idea of a WEO, with an overarching coordinating and institutional role had come up even then,” he noted.

However, at PrepCom meetings during the 1992 summit, the idea met with resistance from the developed countries, and various specialised agencies.

In fact, in terms of the U.N. Charter, the ECOSOC was given this role (ala the Security Council on security issues), but ECOSOC gradually eroded into a talk shop, said Raghavan.

Meanwhile, as a follow-up to the Earth Summit post-1992, there were several institutions, funds and/or commissions and conventions that were set up to deal with environment and development.

These include the Global Environment Facility (GEF) run jointly by the World Bank, UNDP and UNEP; the U.N. Commission on Sustainable Development (CSD); the U.N. Framework Convention on Climate Change and the U.N. Convention to Combat Desertification.