MEXICO CITY, Jun 14 2012 (IPS) - Rising temperatures, water scarcity, loss of biodiversity, widespread respiratory ailments and urban heat islands are some of the climate impacts faced by the Mexican capital, one of the world’s biggest cities. 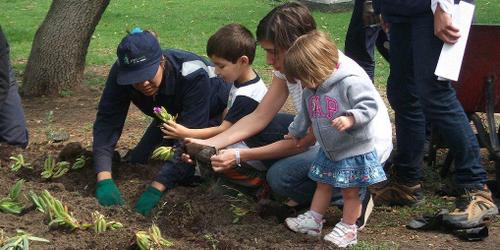 Local families taking part in activities to “green up” the capital, as part of the Mexico City Green Plan. Credit: Federal district government

To address these issues, the Atmospheric Sciences Centre of the National Autonomous University of Mexico and the Institute of Science and Technology in Mexico City created the Virtual Centre for Climate Change in Mexico City (CVCCCM), dedicated to research to inform public policy-making.

“Energy, water, soils, health problems, and the conservation of biodiversity are the main issues focused on by the Virtual Centre,” Carlos Gay, the director of the Atmospheric Sciences Centre, told IPS.

“There is a link between the research and decision-making, although not as deep a link as I would like. The government has proposed questions that are of interest to the city,” he added.

With academics from public and private universities in Mexico and abroad, the CVCCCM has carried out 21 research studies and is now conducting another five, one of which is focused on poverty.

The CVCCCM counted 589 extreme weather events between 1970 and 2009, such as rainfall, storms, hurricanes, whirlwinds, sleet, hail or frost. There were 50 percent more extreme events in the last decade than in the 30 previous years.

The federal district of Mexico City, home to nine million of the city’s 20 million people, emits 37 tons a year of carbon dioxide (CO2), one of the main greenhouse gases blamed for global warming.

“In Mexico City, administrative boundaries do not align with the city’s geographic boundaries and carbon-relevant functioning,” says a report by the C40 Cities Climate Leadership Group.

The left-wing government of the federal district has been carrying out a Green Plan since 2007 to foment public and alternative forms of transport, sustainable housing, solar energy, river clean-up, the restoration of ecosystems, and urban rooftop gardens.

“Adaptation and mitigation are going well, but it’s a slow process. The dynamic of the city is quite complex,” Omar Rojas, academic coordinator of engineering in sustainable development at the private Institute of Technology and Higher Education, told IPS.

The C40, which was created in 2005 and groups 58 large cities around the world, estimated annual emissions of CO2 produced by 42 of the cities at 609 million tons in 2011. Total global greenhouse gas emissions amount to 30 billion tons, according to the International Energy Agency.

The federal district, whose government did not respond to the questionnaire used by the C40 to draft its report, has nine square metres of green space per person, compared to an international standard of between 10 and 15 square metres.

The city was founded in the 14th century by the Mexica tribe of the Aztecs, who settled on a small island in a valley of five lakes, and built causeways supporting aqueducts and roads connecting the city, Tenochtitlan, with the shore.

After the city fell to the Spanish conquistadors in 1521, the colonialists modified the Aztec water infrastructure, causing major floods, like the one in 1555. To prevent further flooding, they built a drainage system that eventually dried up the lakes. But flooding remains a problem today.

Urbanisation destroyed the valley ecosystems. By 1980, the Mexican capital was one of the most polluted cities in the world, with chronic problems of smog, garbage and lack of water – a bad combination for confronting climate change.

“Cities have emerged as the first ones in responding to climate change. At the same time, they are in the frontline of impacts, as they are located on the coast and in the basin of rivers and at riverbanks or borders of lakes. They are already suffering heat islands and exacerbated temperatures,” Cynthia Rosenzweig, with the Earth Institute at the University of Columbia in New York City, told IPS.

An urban heat island is a metropolitan area that is significantly warmer than surrounding rural areas, due to the heat absorbed by structures and pavement.

“In recent times there has been more attention to mitigation, but in the last years cities have noticed that they have to take into account adaptation,” she said.

Rosenzweig is one of the editors of the “Climate Change and Cities: First Assessment Report of the Urban Climate Change Research Network”, published in 2011, in which some 100 experts from around the world studied 12 cities.

Mexico City “has developed important efforts to curb its greenhouse gas emissions,” says the report. “Policy networks, political leaders, and research groups have been critical in launching a climate agenda. Nevertheless, this has not been enough to push effective policies.”

In 2008, the Mexican capital became the first Latin American city to establish a climate action programme, and since 2011 it has had a law on climate change mitigation and adaptation and sustainable development.

The law granted the authority to establish adaptation and mitigation actions, set up a specific fund for the purpose, drew up an inventory of set sources of emissions, created a carbon bond market, and provided financial incentives for combating global warming.

“The city has different vulnerabilities, due to its geographic and economic makeup. That’s why adaptation is much more complicated, because it has to with socioeconomic conditions,” said Gay.

“Science takes its time, and the actions have to come after the studies. In the future I would expect the Virtual Centre to grow in size and research capacity,” he added.

The CVCCCM – which has a budget this year of 215,000 dollars, provided by the government of the federal district – proposes to foment collection of rainwater, local treatment of sewage, and the creation and regular updating of airborne pathogen databases.

“The big challenge in the city is urban growth and sustainability, because many of the services it receives are from the countryside,” Rojas said. “The phenomenon of urban sprawl leads to the collapse of areas on the outskirts, due to a lack of services.”

“Public policies and mitigation and adaptation plans should be in line,” Rosenzweig said. “We are just at the moment when cities are taking both into account, interactively. Sustainability depends on economic, social and environmental aspects, and that is vital to have low-carbon cities.”

The Rio+20 Global Town Hall, being held this month parallel to the United Nations Conference on Sustainable Development in Rio de Janeiro, will address issues that are essential to guaranteeing a sustainable urban future. It is organised by ICLEI – Local Governments for Sustainability, which brings together authorities from more than 1,220 cities in 70 countries.

*This article is part of a series supported by the Climate and Development Knowledge Network (CDKN).