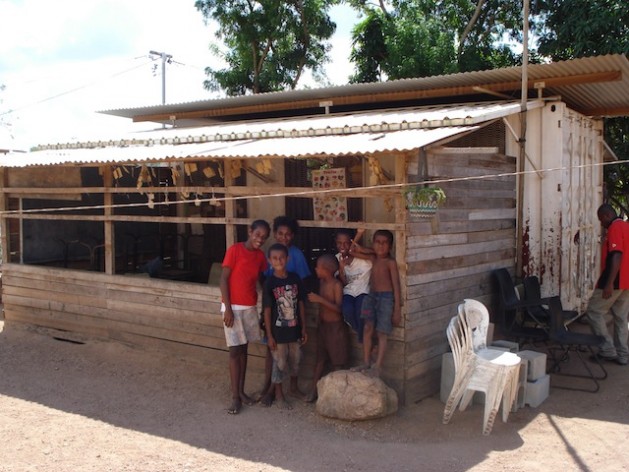 PORT MORESBY, Jul 17 2012 (IPS) - In an informal settlement of 10,000 people on the outskirts of Papua New Guinea’s capital, Port Moresby, Tembari Children’s Care – a new grassroots initiative – is providing protection, food and education to orphans and abandoned children who would otherwise join the high numbers of child labourers in this Melanesian country.

Hayward Sagembo and his wife, Penny, who live in Nine Mile Settlement, became deeply concerned by the numbers of children neglected and orphaned due to their parents dying of AIDS or other causes.

“So we decided to start an organisation that would help some of them,” Sagembo told IPS. “Tembari Children’s Care started underneath our house in 2003 and we managed it there for eight years.”

With the contribution of two shipping containers by the Papua New Guinean Digicel Foundation, which have been converted into classrooms, and donations of food and materials by local businesses, the centre is able to provide the most vulnerable children with daily meals, school fees and some clothes.  Elementary to pre-school education is provided to 120 young children and day care to 280 who are homeless.

“Most of the children are malnourished and since they have been in our care their health has really improved,” Sagembo continued. “Through our early education programme, they have gained confidence and gone on to schools where they have won prizes.”

But he emphasised there were many more children in need.

“Sixty percent of children in the settlement are vulnerable and TCC is the only children’s centre at Nine Mile.  We are able to help 3-4 out of 10 children.  If our centre did not exist, these children would be living on the streets without shelter and resorting to child labour to survive,” he said.

According to the International Labour Organisation (ILO), the Asia Pacific region, which is the most child populous region in the world, is home to the largest number of child labourers aged 5-17 years, even though number of children in employment in the region declined from 122.3 million in 2004 to 96.4 million in 2008.

Earlier this year the International Programme on the Elimination of Child Labour (IPEC) and TACKLE – a four-year joint project between the European Union, the African, Caribbean and Pacific group (ACP) Secretariat and the ILO to fight child labour through education initiatives – released a report on child labour in Papua new Guinea.

Between 2010 and 2011, the report team surveyed children working on the streets and those involved in commercial sexual exploitation in Port Moresby and found that children comprise 19 percent of the nation’s labour market of 2.5 economically active people.

The findings of the report were based on a survey of 404 children in the capital. Accurate national statistics on child labour are still unknown.

Most of those interviewed were not attending school and were involved in the worst forms of child labour, including prostitution and illicit activities, such as stealing.  Sixty eight percent were doing hazardous work, such as controlling traffic, scavenging for scrap metal, working long hours and suffering physical and verbal abuse.

The prevalence of children working on the streets is exacerbated by domestic violence and abuse, family breakdown, adult unemployment, as well as political instability, weak state governance and the negative repercussions of structural adjustment programmes.

But the main cause of child labour in Port Moresby is urban poverty. Approximately 20 squatter settlements emerge every year in the capital, in wasteland areas lacking clean water and sanitation. These makeshift slums have become home to more than half the city’s population of 500,000.

Rapid urbanisation, due to rural migrants seeking employment and access to health and education, has not been matched by development in infrastructure, affordable housing and public services.

The report claims most street children are from settlements where the average salary is between 62-156 dollars per month.  Poverty is worsened by the rising cost of living and a meagre minimum hourly wage of 2.29 kina (just over a dollar), resulting in many children forsaking their right to education in order to work and contribute to their own survival or that of their family.

This year, the government introduced a policy of “tuition fee-free education” for all students from Elementary Prep to Year 10 in secondary school. But according to Larry George at City Mission PNG, a stakeholder organisation in the child labour report, “It may have some impact, but the poor families in the settlements will still be hungry and may even keep their children home from school if there is a chance of sending them out to earn money.”

Despite Papua New Guinea having ratified the Convention on the Rights of the Child (CRC), ILO Convention No. 138 on the minimum working age and No. 182 on the worst forms of child labour, the state is struggling to provide adequate protection to its children who are some of the most vulnerable in the world.

The ILO report also observed that “although laws do exist on child labour…..these laws were usually silent and implementation of these laws was unsatisfactory”.

In 2009 the government introduced the Lukautim Pikinini (Child Protection) Act which provides for holding parents and businesses accountable if found guilty of facilitating harmful child labour.

“The idea of the Act is good, but funding has not been given for (its) implementation,” George told IPS.  “In Lae, for example, there are only about three social workers to cover the whole (Morobe) province.  They are overworked, under-funded and work in dilapidated offices with no transport available.”

In a foreword to the report, the Minister for Labour and Industrial Relations, Martin Aini, declared, “Our country’s fundamental values, principles and hopes for the future are slowly being eroded by our half-hearted approach towards addressing the issues surrounding child labour.”

The report’s authors recommend addressing child labour with increased access to education, better law enforcement and social security for the poor. In addition, a report by the Asian Development Bank on street children in the Asia Pacific region advocates the need for behavioural change in adults in regard to children’s rights, health and education outreach work on the streets and more temporary accommodation and vocational skills training to enable homeless children to transit out of a marginalised existence.

But action to address widespread poverty is also essential, such as reviewing the minimum wage, raising standards of housing and basic services and tackling the corrosive impact of corruption which includes an increasing inequality gap.  Otherwise, the perceived need for child labour will continue.