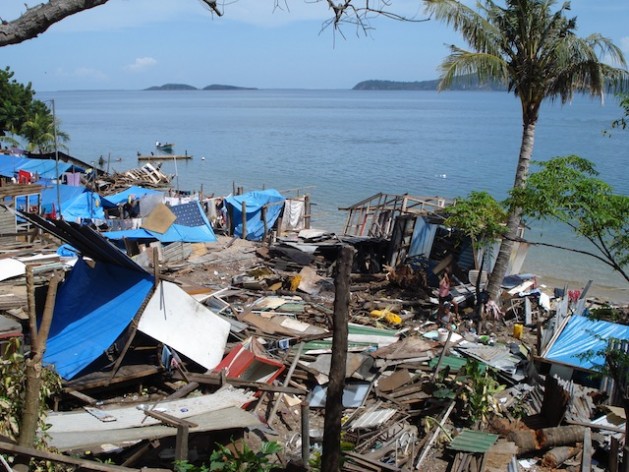 Residents of the Paga Hill Settlement in Port Moresby are living under tarpaulin shelters following an attempted eviction on May 12, 2012. Credit: Catherine Wilson/IPS

PORT MORESBY, Jun 4 2012 (IPS) - Informal settlers on prime land in Papua New Guinea’s capital, Port Moresby, are now living under tarpaulin shelters amid the debris of their homes after two attempted evictions to make way for a luxury waterfront development. Undefeated, residents are now preparing a court case to challenge the legality of a lease issued to a commercial developer on land designated as a National Park.

Paga Hill overlooks Moresby Harbour in the central business district of Port Moresby, a city of 450,000 people on the south coast of Papua New Guinea.  The hill features bush land, historic Second World War relics and an informal settlement of 3000 people, comprising four generations of rural migrants.  Most of the settlers migrated from the Gulf Province in search of work in the early twentieth century.

Informal settlements have grown in the capital as urbanisation has placed stress on the city’s housing and service infrastructure. The nation’s urban population, an estimated 12.6 percent of the total population, is predicted to rise to 35 percent, or 3.5 million people, by 2030.

Fifty-four percent of settlers on Paga Hill are formally employed, but their only residential option is a settlement because of limited land availability, low incomes and the absence of affordable housing.  According to the United Nations Economic and Social Committee for Asia and the Pacific (UNESCAP), throughout urban centres of the South Pacific “the formal housing market caters to upper income groups because of the cost and access to long term loans.  Those without access to affordable housing are left to their own initiative.”

In 1987, 13.1 hectares on Paga Hill were classified as a National Park for future generations.  Ten years later, the Department of Lands and Physical Planning granted an Urban Development Lease over this state land to the Paga Hill Land Holding Company, and, in 2000, granted a Business Lease to Paga Hill Development Company (PHDC), a foreign and domestic business venture.

After fifteen years, during which no development occurred on Paga Hill, the settlement was notified of impending eviction this year. The chief community leader of the settlement unilaterally accepted monetary payment from the company and signed an agreement giving his consent without consulting the community and those who were preparing a challenge to the eviction.

Joe Avapura Moses, of Paga Hill Heritage Association, claims he subsequently notified PHDC that he was appointing a lawyer to respond to relocation plans the company had proposed, but discussions ceased when a first eviction was attempted in April.

A contingent of over 150 armed police then arrived on May 12 with earth moving equipment.

A spokesperson for the Royal Papua New Guinea Constabulary said the police received a court order requesting their assistance in the eviction exercise and claiming the settlement had been given adequate notice.

“Policemen with guns demanded residents pull their houses down,” said Moses. “They drove a backhoe straight at my house to demolish it while my two children were underneath the house worshipping.”

Moses and his family lost their home and possessions.  Within four hours a total of 20 dwellings had been destroyed leaving over 120 homeless families.

The Paga Hill Development Company could not be contacted for comment.

Member of Parliament for Moresby South, Dame Carol Kidu, who visited the eviction scene, said the human rights of the settlers and the legality of the development lease held by PHDC had to be addressed.

According to a Public Accounts Committee Report to Parliament in 2009 following an Inquiry into the Department of Lands and Physical Planning, “The (Paga Hill) land was a gazetted National Park and could not be granted away to private hands. How the land came to be given to private speculators is a good illustration of the failings and corrupt conduct of the Department of Lands and Physical Planning.” It is believed the land became vulnerable to speculators following the disbanding of the National Parks Board in 1995.

The land was later rezoned as ‘part commercial’ in 2000, but there is insufficient documentary evidence of how and why this was done.

The Inquiry reported the company did not comply with conditions of the development lease, which included providing improvements on the land to the value of 300 million kina (about 142 million dollars) during the first five years, and failed to pay the correct land rental.

Kidu is also concerned there are no detailed development plans for public scrutiny, nor is there available evidence of the funds to be provided by the foreign investor.

The company, whose website promotes a development comprising exclusive residential apartments, marina, waterfront restaurants, retail outlets and a hotel resort, claimed in a recent media release that “Investigations by both the Ombudsman Commission and Public Accounts Committee have found no wrongdoing on the part of PHDC or the associated government entities in issuing the leases over the site.”

In Papua New Guinea, land grabbing, or controversial acquisitions of large areas of land in developing countries by foreign and domestic corporate interests, has been mainly associated with agricultural and forested land.  Research by the Australian National University reveals that between July 2003 and January 2011 almost 11 percent of PNG’s total land area has passed into the hands of national and foreign corporate entities through leasing schemes.

But the phenomenon is also occurring in urban areas.  This year, the Motu-Koitabu Association, which represents traditional landowners in and around Port Moresby, called on the government to implement a moratorium on applications for freehold title, special agriculture and business leases until allegations of illegal land grabs had been investigated.

Meanwhile at Paga Hill, settlers are preparing a court appeal against their eviction on human rights grounds and a legal challenge to the land acquisition by PHDC.

“It must be stated in a court room that this is a fraudulent title,” Kidu declared. Nevertheless, in the long term, she said the settlement will have to move.

“They (Paga Hill settlers) are marked for relocation, as are other settlements, even ones that are legal, but it has to be done properly. It is essential to plan new communities with areas for gardens, community facilities, clean water, sanitation and electricity.”