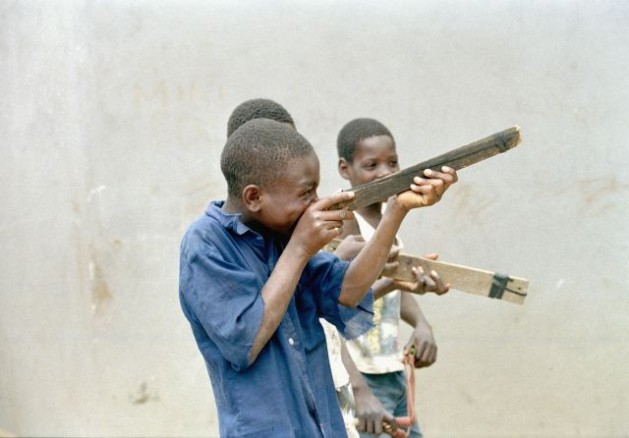 Boys play with toy guns in a suburb of Maputo. Some 2,000 persons are killed by arms every day. Credit: UN Photo/Pernaca Sudhakaran

UNITED NATIONS, Jul 31 2012 (IPS) - The protracted negotiations on an Arms Trade Treaty (ATT) with the ambitious aim of eradicating the illicit trade in conventional arms hit a deadlock Friday at United Nations as Washington, Moscow and Beijing required “more time” after six years of preparatory meetings.

The Arms Trade Treaty could have, for the first time, regulated the trade of conventional weapons in the world.

“This treaty is a key element to make people safe,” representatives of Control Arms, an NGO striving for a legally binding Arms Trade Treaty, told reporters Friday morning, a few hours before the final meeting.

“All eyes are on Washington to see if the Obama administration is ready to lead this treaty to a conclusion.”

“We have until the end of the day, the historic opportunity is here,” they added, confident and hopeful for the final day of negotiations.

But while activists had been pointing at the draft treaty’s “numerous loopholes” during the last week, the main loophole of the conference turned out to be the lack of political will from three big powers.

In a dramatic turn of events, the U.S., the world’s largest exporter of arms, refused to accept the long-awaited treaty Friday night, followed by Russia and China.

“The U.S. have had three years to sort out what they want, there were a lot of opportunities to find ways to reach consensus,” Amnesty International’s Brian Wood told reporters during Friday’s briefing.

While 153 states have consistently voted in favour of what could have been a first-of-its-kind regulation on conventional weapons, Washington, Moscow and Beijing declared that they needed “more time”, thus postponing the finalisation of the treaty to next year.

With 2,000 persons killed by arms every day, the delay came as a disappointment for many, including U.N. Secretary-General Ban Ki-moon.

“I am disappointed that the conference on the Arms Trade Treaty concluded its four-week-long session without agreement on a treaty text that would have set common standards to regulate the international trade in conventional arms,” Ban said in a statement released late Friday in London, where he was attending the opening ceremony of the Olympic Games.

Although activists considered the final draft to be satisfying “in spite of some loopholes”, Mikhail Ulyanov, the Russian negotiator at the Arms Trade Treaty conference, told the Russian news agency RIA Novosti that the text was too “weak” and that Moscow “could not support it in its current form”, without giving much more detail.

As for Beijing, it asked the EU to drop its arms embargo on China, which generated laughter in the conference room, and was visibly not satisfied by the refusal.

Rather than a fight for human rights, the Arms Trade Treaty Conference became a political game played by the three big powers.
The ongoing Syrian situation has had a great influence on the outcome, with Russia still selling arms to Syria and the U.S. seeking to increase its aid to the Free Syrian Army.
“We’re looking at the controlled demolition of the Assad regime,” Andrew J. Tabler, a Syria expert at the Washington Institute for Near East Policy, had told the New York Times a week before the end of negotiations.

In addition to the complex Middle East situation, the U.S. had to deal with the anger of its biggest gun lobby, the National Rifle Association (NRA), which campaigned against a treaty that, it said, threatened the right of U.S. citizens to bear arms.

In the run-up to November’s presidential election, President Obama is clearly leery of a public spat with the association, which has more than four million members.

According to the NRA, the treaty was “wholly incompatible with the Second Amendment rights protected by (the) Constitution.”

However, it has been repeated many times during the talks that the treaty only sought to control international arms transfers and had therefore nothing to do with the Second Amendment.

“The NRA did their own lobbying and sent a message, but one that was not connected to what was happening in the conference room,” Alberto Estevez, Amnesty International’s lobbying coordinator on the arms trade treaty, told IPS.

“It was very misleading and it only helped create confusion,” Estevez added.

A U.N. arms trade treaty would not “interfere with the domestic arms trade and the way a country regulates civilian possession”, the U.N. Office for Disarmament Affairs had emphasised at the beginning of the month.

But Friday night, after months of campaigning, the NRA celebrated the failure of the treaty.

“This is a big victory for American gun owners, and the NRA is being widely credited for killing the U.N. ATT,” the organisation proudly declared.

The “killed” Arms Trade Treaty is now to be referred to the U.N. General Assembly’s First Committee in October, where it will be submitted to a majority vote.

The process will take a long time, Estevez warns.

“It might well take two to three years at least, and that would mean that the ATT would not enter into force until 2014 or 2015,” he told IPS.

“A key question remains whether the largest exporter of arms – the U.S. – wants to be part of the game,” Estevez added.

Civil society remains hopeful that the U.S., which holds the key to consensus, will help make the treaty a reality.

“The Obama administration’s feebleness in the face of the American gun lobby will result in 2,000 lives lost each day… but (it) still has time to turn election year adversity around by courageously supporting a strong Arms Trade Treaty outcome during the U.N. General Assembly meetings in October,” Austin told IPS.

“We won’t give up,” Amnesty International’s Estevez told IPS. “The battle still goes on.”