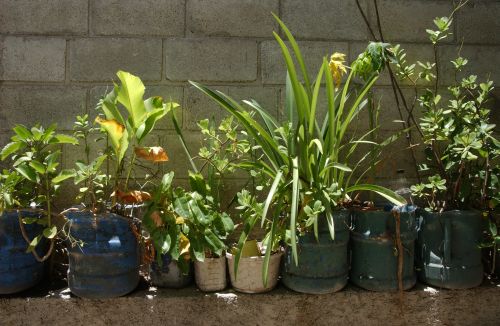 Food plants are often grown in recycled plastic containers that are placed around the perimetre of the property or on top of walls. Credit: Susan Robens-Brannon

PORT-AU-PRINCE, Aug 8 2012 (IPS) - Many Haitians living in poor neighbourhoods of the capital Port-au-Prince and semi-permanent tent camps are relying on kitchen gardens to put healthy food on the table.

Most homes are very small in size and it is too hot to cook inside. Instead, meals are cooked outside among plots of seasonal vegetables, produce and fruit trees, which also provide much needed shade.

Just before the rainy season, corn is planted in vacant lots near homes or on small spaces of land near the camps. When the corn is mature, it is eaten or sold at market, where it is grilled and eaten as a snack.

Dwitche Savin, who has a small plot of corn outside the capital, reuses seeds from previous crops. So far, GM seeds have not infiltrated the Port-au-Prince area, Dwitche told IPS.

“I know what GMO seeds are, (but) we don’t buy the seeds for our corn. Why pay for something that you can get for free?” he said.

Savin’s crop includes bean plants that are tucked among the corn, using the corn stalks as the “pole” for the plants. “I like to add flowers in my crops because they help to keep the bugs down from the plants, although some of us do use pesticides on our corn.”

One woman in Cannon camp, which houses nearly 6,000 displaced Haitians, grows a few stalks of corn, tomatoes and small banana trees on a one-metre by three-metre plot of land in front of her tent, where she has lived since the devastating earthquake of Jan. 12, 2010.

“Every bit helps with the budget,” she explains.

Her plants are rooted directly into the ground. Others use large recycled plastic containers that are placed around the perimetre of the property or on top of walls.

With unemployment at 40.6 percent, and an inflation rate of 5.7 percent, growing their own food helps to keep families fed, with hopes of enough surplus to add extra income.

Most Haitians live on two dollars or less per day.

Carine Savin, Dwitche’s mother and who lives in the same area, told IPS, “We share the plants and cuttings so we don’t have to go out and buy plants.”

Supplementing the diet with fresh produce is also critical since even before the quake, nearly one-third of children under age five were chronically malnourished, and over the half of deaths among under-five children were caused by malnutrition, according to UNICEF.

In tropical regions, one of the main food sources is the green banana, which can be grown yearlong in 75 to 150-day intervals. The banana is boiled, sliced, smashed, then fried and served with a topping of meat or fish sauce. The talk of the town here is that the green bananas are full of nutrition and healthier than the “yellow” banana.

“It will make you strong,” Carine Savin says.

Tropical fruit trees are the easiest fruits to grow with little or no effort in tropical climates. Lime trees are randomly planted off the residential roads throughout Haiti, and can be used for both culinary and medicinal purposes.

The limes are small but they are “good for healing you when you are not feeling well and (they) clean out your system” said one local gardener.

Not only can a person pick a fresh fruit to nibble on while taking a stroll, but the fruits are often used to make fresh juice.

Grapes are also grown around town, but Dwitche Savin says that most people “are not patient enough to let them grow to their maturity”. Picking grapes early results in a small and tart fruit, but they can still be used to make jam, he added.

Water is scarce, and as a result Haitians have learned to use their water wisely and conservatively. For example, when they do the laundry, wash dishes, or cook outside, they throw the water onto the plants when they are finished. The fruit trees grow naturally in the climate without the need for much water.

Goats, chickens and pigs roam freely or are tied up to nearby banana plants. The goats eat the banana leaves and other plants while tied up on short leashes. The chickens pick at small items littered onto the ground and the pigs seem to be enthusiastic about the banana roots both for the moisture as well as the wet soil.

When a pig is spotted scraping at a banana root, passersby will often stop the pig from destroying its root. In spite of the snacking animals, the plants seem to thrive.

Because land is scarce, many Haitians erect a large wall around their land while they build their homes.

Carine Savin said that it took her family 10 years from start to finish because, “We have to pay cash for each part of the building. The people who have money can hire contractors, but it still takes a long time. The prices are high because the prices of the materials and labour is high.”

And one of the first things people do once their property is walled in is to plant some trees “to provide shade and hopefully fruit later on”, she said.