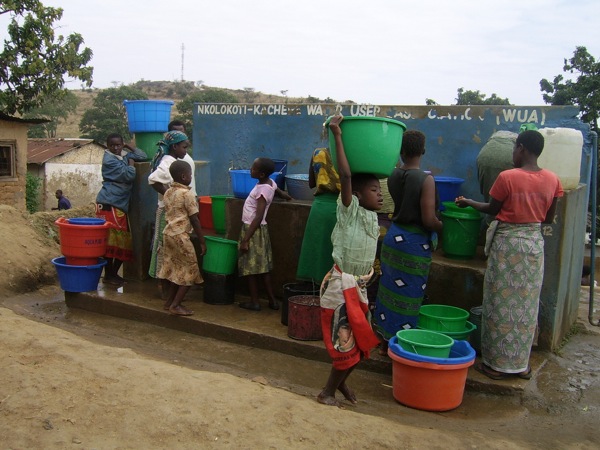 STOCKHOLM, Aug 31 2012 (IPS) - As the weeklong international conference on water concluded Friday, it was left to one of the keynote speakers from the United Nations to focus on a much neglected perspective on water and food security: the role of women.

Lakshmi Puri, deputy executive director of U.N. Women, told delegates that development can be neither sustainable nor inclusive if it does not free women and girls from “carrying heavy buckets of water every day”.

In Sub-Saharan Africa, 71 percent of the burden of collecting water for households falls on women and girls, says the U.N.’s 2012 report on Millennium Development Goals (MDGs).

Currently, women in sub-Saharan Africa spend an average of about 200 million hours per day collecting water, and a whopping 40 billion hours per year, according to the U.N. Development Programme.

“And that’s a billion with a B,” Puri emphasised to IPS hours after she made an impassioned plea for gender equality and women’s empowerment in relation to food and water security.

Speaking at the closing session of the conference, she pointed out that although women carry, literally and metaphorically, most water-related tasks – playing a key role in food production, especially in subsistence farming, and performing most of the unpaid care work -their participation in decision-making processes on water and food management remains very low.

“This does not only result in biased and misinformed decision-making, it jeopardises the achievement of women’s human rights,” she added.

The annual conference, one of the world’s largest gathering of water experts, drew over 2,000 delegates to the Swedish capital this year.

“The key area of empowerment is in empowering women,” she added. “In educating women on the value of safe water, we are then educating the household, and through that the entire country, to change their behaviour.”

At a side event, “Why African Women Matter in Sustainable Food Production”, it was pointed out that women do much of the farm work, and also grow most of the food crops, yet men control most of the land, farming inputs and equipment and agricultural markets.

The bottom line: women are key actors in agricultural activities but they are not key decision makers.

There are few or no women in national water boards governing the management and distribution of water, and fewer still holding decision-making jobs at ministries for gender affairs.

In 2012, women held less than six percent of all ministerial positions in the field of environment, natural resources and energy, according to the United Nations.

Agriculture has not fared any better. “Only five percent of women in Kenya own land registered in their own names,” said Dr. Akinyi Nzioki of the Centre for Land, Economy and Rights of Women (CLEAR) based in Kenya.

Violet Shivutse of Grassroots Organisations Operating Together in Sisterhood (GROOTS) of Kenya said today’s land tenure system continues to undermine rural women’s efforts to access land when they rely so much on agriculture for their livelihoods.

She said most inherited land is transferred primarily to sons, not daughters. And there were instances of widows with HIV/AIDS who were evicted from homes and denied access to land.

Bethlehem Mengistu, regional advocacy manager for WaterAid in East Africa, told IPS that most African countries do have national legislation and are state parties to international conventions protecting the rights of women.

“We have made lots of progress,” she said, “but there is a gap between policy and implementation.”

Puri, who attended the Rio+20 summit meeting in Brazil in June, said the outcome document adopted by world leaders there set in motion a number of processes, including the development of Sustainable Development Goals (SDGs) which will follow the completion of the U.N.’s  Millennium Development Goals (MDGs) in 2015.

It is important not only that these SDGs include a specific goal on gender equality and women’s empowerment, but also that gender perspectives are mainstreamed in all other goals, including a SDG on water, she noted.

“This will give the goals a better chance to be achieved and, at the same time, contribute to the achievement of gender equality.”

On the positive side, the global movement towards gender equality and women’s empowerment has also shown results, albeit limited.

In Morocco, for instance, the Rural Water Supply and Sanitation Project of the World Bank was aimed at reducing the burden of girls, traditionally involved in fetching water, in order to improve their school attendance, said Puri.

In the six provinces where the project is based, it was found that girls’ school attendance increased by 20 percent in four years, attributed in part to the fact that girls spent less time fetching water.

At the same time, convenient access to safe water reduced time spent collecting water by women and young girls by 50 to 90 percent.

She said it has also been proven that improvements in infrastructure services – especially water and electricity – can help reduce time women time spend on domestic and care work.

In Pakistan, putting water sources closer to the home was associated with increased time allocated to market work. In Tanzania, a survey found that girls’ school attendance was 15 percent higher for girls from homes located 15 minutes or less from a water source than for those in homes one hour or more away.

“We need to address the multifaceted gender discriminations in accessing and controlling productive resources such as water and land, assets and services,” Puri noted.

She said evidence suggests that investing in women-owned food and agricultural enterprises could narrow the resource gap and increase agricultural yields to potentially reduce the number of hungry people by 100 to 150 million.