UNITED NATIONS, Sep 20 2012 (IPS) - In 1996, Maria Mamerita Mestanza Chavez, a 33-year-old Peruvian mother of seven, was threatened with imprisonment if she did not comply with the government policy of undergoing sterilisation. After suffering post-operative complications for which she was refused treatment, Chavez died nine days later.

After years of legal proceedings in the Inter-American Commission on Human Rights (IACHR), in 2003 the Peruvian government finally acknowledged international legal responsibility for its actions.

Chavez’s story is not the only case in which national law has forced women to undergo involuntary sterilisation. Although many women’s and disability rights organisations and other human rights bodies have condemned coercive sterilisation, thousands of women and girls worldwide are still denied the right to make decisions about their own reproduction. 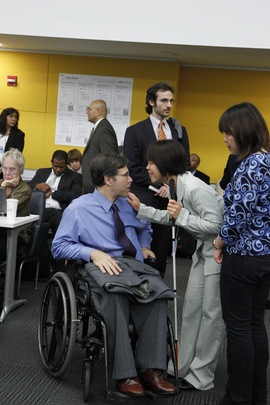 Participants on the first day of the Fifth Session on the Conference of States Parties to the Convention of the Rights of Persons with Disabilities, hosted by the U.N. Sep. 12-14, 2012. Credit: UN Photo/Rick Bajornas

Involuntary sterilisation, an operation which, without an individual’s consent, permanently ends his or her ability to reproduce, has occurred in regions with many different cultural backgrounds, ranging from the United States and Switzerland to Japan, China, Puerto Rico, Brazil and others.

The operation “has historically targeted…marginalised groups of women such as women with disabilities, women from ethnic minorities, indigenous women, low-income women and women living with HIV”, said Luisa Cabal, vice president of the New York-based Centre for Reproductive Rights, at a side event organised by the World Health Organisation (WHO) at the U.N. headquarters Sep. 13.

WHO estimates that over a billion people in the world, or approximately 15 percent of the global population, have disabilities.  According to a WHO report, disabled women are particularly vulnerable to involuntary sterilisation.

Forced sterilisations on disabled women are often performed under the auspices of medical legal services or with the consent of court-appointed guardians, who have the authority to decide on behalf of the patient. Various justifications are offered for the procedure, including disabled women’s inability to parent, protection from sexual exploitation and abuse, population control, or so-called menstrual management.

The United Nations Convention on the Rights of People with Disabilities (CRPD), adopted in 2006 and ratified so far by 119 countries, recognises that disabled individuals have the right to make decisions freely and responsibly regarding their reproductive lives.

These rights and others were discussed at the Fifth Session of the Conference of States Parties to the CRPD, which concluded at U.N. headquarters Sep. 14. This year’s conference focused on women and children.

Strongly advocating the rights of women with disabilities at the conference was Prince Zeid Ra’ad Zeid Al-Hussein, Jordan’s ambassador and permanent representative to the United Nations.

In his remarks at the opening session, Hussein outlined the role Jordan’s Higher Council for Affairs of Persons with Disabilities (HCD) has played in raising awareness of and advocating for the rights of Jordanian women with disabilities who are subject to sterilisation, which he called a “misconceived and shameful practise”.

“The committee targeted parents, doctors and gynecologists, legal experts and judges as well as religious leaders to address this issue,” Hussein explained.

Despite the existence of the CRPD, disability is not even explicitly mentioned in the U.N.’s Millennium Development Goals (MDGs), pointed out Ahmed Abul Kheir, Egypt’s ambassador and advisor to the Minister of Social Affairs. He urged the U.N. to tackle the issue at a high-level meeting of the General Assembly on disability and development in September 2013.

In 2011 five women with mental disabilities brought their case before the European Court of Human Rights. Each had involuntary undergone the process of tubal ligation without their informed consent. This case, Gauer and Others vs. France, remains open but is considered best example of how involuntary sterilisation can be effectively tackled by international institutions.

“A positive decision from the court in this important case would have a tremendous impact on reinforcing the autonomy of women with disabilities with respect to their reproductive health,” said Yannis Vardakastanis, president of the Brussels-based European Disability Forum, in a press release.

“States are under an obligation to take measures to prevent such violations and to investigate and prosecute them to the fullest extent when they do occur,” he added.

Nevertheless, preventive measures and support services are often limited and insufficient, according to Cabal, the Centre for Reproductive Rights vice president.

“Governments and health institutions have weak or inadequately implemented informed consent policies, guidelines, procedures to protect patient rights,” she said. “There is very little accountability for the ethical and human rights violations.”

“The human rights obligations of each state requires the adoption of all necessary measures – legislative, budgetary, judicial and administrative – to ensure women with disabilities access to reproductive health services,” Cabal told IPS. States must also establish accountability mechanisms to ensure laws and policies are fully implemented.

Moreover, victims of forced sterilisation must have access to the court system to vindicate their rights, Cabal said.

According to Erszébet Földesi, the vice president of the European Disability Forum, one of the main challenges preventing forced sterilisations is providing women with disabilities with appropriate information about their sexual and reproductive health care options. Another challenge is obtaining their free, full and informed consent to such procedures.

Health professionals ought to be “trained to deal with and assist women with disabilities in the area of sexuality and reproductive health and motherhood”, she added.

Asked what support must be delivered to the victims of forced sterilisation, Földesi told IPS that victims must have access to “recovery, rehabilitation and social integration”.

Highlighting the issue through social media networks or elsewhere online could help raise the awareness of the general public and policymakers about forced sterilisations, Földesi added.