Small Dams – from Heroes to Villains in Brazil 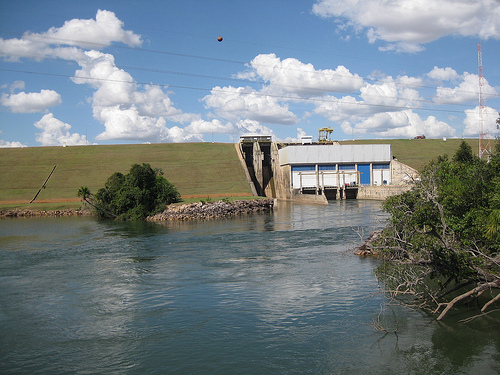 RIO DE JANEIRO, Sep 10 2012 (IPS) - A recent Brazilian court decision to suspend construction of small hydroelectric dams along the Paraguay River has highlighted the doubts raised about a growing alternative source of energy that until recently was considered one of the most environmentally-friendly sources.

At the request of the public prosecutor’s office in the southwest Brazilian state of Mato Grosso do Sul, a federal court ordered a halt to the construction of small hydropower dams in that southwestern state until their possible environmental impacts have been fully assessed.

The studies that have been carried out focus on the environmental impacts of each separate dam, but the prosecutors argue that the combined effects of all of the small hydropower projects together must be evaluated.

The court ruled on Aug. 28 that small hydroelectric plants can cause irreversible damages, for example by modifying the annual cycles of flooding and drought in the Pantanal, one of the world’s largest wetland systems, which covers 230,000 square kilometres in southwestern Brazil, northern Paraguay and eastern Bolivia.

Altering the cycles in the wetlands could in turn affect the 4,000 families who depend on the Pantanal in Mato Grosso do Sul for survival, through tourism, farming and fishing. The Pantanal, a national park, was declared a World Natural Heritage site by UNESCO in 2000.

“It’s pretty obvious, even to the layman, that damming up the water at different points along a river changes the ebb and flow of the water. What is at stake here is the history of the Pantanal,” argued Daniel Fontenele Sampaio of the federal public prosecutor’s office in Mato Grosso do Sul.

There are 113 small hydropower dam projects along the Upper Paraguay River alone, including 30 that are already operating, in addition to 10 larger dams.

As defined by Brazil’s power regulator, ANEEL, small hydroelectric dams have an installed capacity of between one and 30 MW, and have reservoirs less than three square kilometres in size.

According to the Portal PCH – the web site of Pequenas Centrais Hidrelétricas, the association that represents most of the country’s small hydroelectric plants – small dams are an alternative used mainly along shorter, swift-flowing rivers with enough hydraulic power to move turbines.

“In the case of the Pantanal, there are significant impacts, because the dams interrupt the natural ebb and flow cycle,” physicist Roberto Kishinami, who specialises in the sustainable use of natural resources, told IPS.

The operation of so many small hydropower dams would involve the permanent flooding of a large, flat area “in a place where the dry season is essential for the reproductive cycle of many species of fish and birds,” he said.

“Small dams have always been the subject of debate,” Kishinami said.

He said this is basically because their impacts are sometimes proportionately larger than those of large dams, taking into consideration indicators such as the ratio of area flooded per kilowatt of electricity, or the number of fish species affected per kilowatt.

The court decision on small dams came at a moment when large hydropower projects like Belo Monte on the Xingu River in the northern state of Para are also the target of heavy criticism from environmentalists and are caught up in lengthy court battles.

The ministry of energy and mines promotes alternative energy sources such as small dams because they supposedly have a smaller environmental impact.

The government’s energy expansion plan foresees gradual growth of alternative sources, from the current nine percent to 13 percent in 2020. Small hydropower dams would account for 3.8 percent of that portion.

The Brazilian Clean Energy Generation Association (ABRAGEL), which groups the great majority of small dams in the country, says they represent “significant potential with the capacity to contribute to the national power supply in a sustainable, clean manner.” It also says they are facing economic and regulatory challenges standing in the way of that goal.

“Brazil cannot stop exploring a clean, renewable and sustainable source of energy that is located near the centres (where energy is needed) and thus does not entail additional costs of transmission,” Charles Lenzi, an expert who was unable to give IPS an interview because he was travelling to different cities around the country, wrote on the ABRAGEL web site.

For his part, Pedro Bara Neto, with the Brazilian chapter of the international conservation group WWF, said that “in theory,” small hydropower dams have much less of an environmental impact than other sources of energy. But, he added, “that cannot be taken as an absolute truth.”

The level of environmental friendliness depends on the number of small dams – “in other words, on the cumulative impact, and on where they are located,” he told IPS. He said this question is “at the centre” of the case of the proliferation of small dams in the Pantanal.

The WWF-Brazil activist mentioned a few negative aspects of small hydropower dams: they fragment rivers, as they are normally located in the headwaters, and reduce river flows, and they are energy-costly.

With respect to the question of what other options there are for increasing energy production in Brazil, Bara Neto said the best alternative was the diversification of alternative sources.

The range of alternatives would include not only small hydropower, but also wind energy, sugar cane bagasse for biomass power generation – mainly near large consumer markets such as São Paulo, the largest city in Brazil –, solar, and “even larger hydroelectric dams, as long as they are the result of a careful study of location and technical and economic viability,” he said.

“What we cannot do is increase our vulnerability to climate change by expanding our dependence on large, distant (energy) projects that are less efficient from a security standpoint, such as the dams in the Amazon (rainforest),” he said.

Kishinami, for his part, said Brazil is running out of environmentally clean alternatives, “mainly because we have already exploited our natural resources to such an extent.”

For that reason, the environmentalist and scientist stressed, this is an opportunity to boost efficiency in the use of what energy is already available.

He criticised the policies of the government of Dilma Rousseff, arguing that she is “heading in the wrong direction.”

“She wants to cut taxes, which is a positive thing as long as it is done with good judgment, to reduce the costs of energy for industry – which in this case, however, is an incentive for inefficiency,” he said.

In Kishinami’s view, the best thing would be to promote increased energy efficiency in industry, in order to reduce costs and bolster productivity.