UNITED NATIONS, Sep 26 2012 (IPS) - The root cause of hunger and malnutrition for millions of people worldwide lies in the severely skewed and unfairly structured hierarchy of policymakers, not in natural disasters or food shortages, according to the Right to Food and Nutrition Watch 2012 (RTFN Watch) released Tuesday. 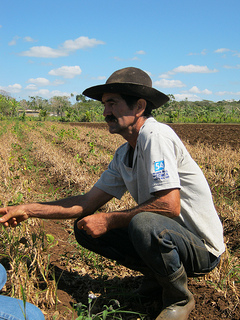 The report entitled “Who Decides About Global Food and Nutrition: Strategies to Regain Control” describes marginalised people, such as peasants and the indigenous, who continue to suffer hunger despite their efforts to farm and cultivate their own food, as “victims of selfish interests”.

Martin Wolpold-Bosien, a founder of the Watch, told IPS, “Food and power are related,” he said. “This is very clear. As long as we do not empower the people, more are affected by hunger and nutrition.”

Wolpold-Bosien is a the coordinator of the Right to Food Accountability at Food First Information and Action Network (FIAN), which annually publishes the globally respected publication, RTFN Watch.

According to the Watch, there is a direct correlation between power and food, in that those with power never hunger, and those without any voice in decision-making have lost individual sovereignty over their own nutrition.

The report defines food sovereignty as “the right of Peoples to define their own policies and strategies for the sustainable production, distribution, and consumption of food, with respect for their own cultures and their own systems of managing natural resources and rural areas, and is considered to be a precondition for Food Security.”

There is an emphasis on the idea that chronic hunger, food riots, and other complications following natural disasters and emergency situations are not direct results of the situations themselves, but rather of the serious gap which exists between decision makers and the effect of those decisions on the livelihoods and daily needs of civilians.

The main reason for this growing gap is that governments and multilateral organisations are relying ever more heavily on public-private partnerships as stakeholders in the path to end hunger, including the Global Alliance for Improved Nutrition (GAIN) and the Scaling Up Nutrition Initiative (SUN).

According to the Watch, public-private partnerships seek a solution through short-term intervention strategies, as opposed to the holistic approach designed to cut the cause of hunger at its roots.

Wolpold-Bosien expressed to IPS his concern in the role of Public-Private Partnerships in the Private Sector. “You cannot expect the private sector to be the best actor for public interest,” he said. “The private sector by definition is constituted to serve the private interest and their business.”

The RTFN Watch argues that, although Public-Private Partnerships are often considered a necessity in the funding of development work, deeper analysis of these partnerships unveils the contradictory agendas involved. The underlying causes of nutritional deficiencies are rarely addressed while very selective programmes are targeted, thereby overlooking locally derived causes and needs.

The RTFMN Watch outlined seven case studies of individual countries, one from each continent, in which the right to food and nutrition are violated due to ineffective legal structures. It also made the direct connection between these violations and the states’ unethical seizures of natural resources and land grabbing, as seen in the case studies of Mexico and the Arab Spring.

“It is impossible to combat the causes of hunger while keeping existing power relations untouched,” stated civil society representatives in an official statement.

The solution to hunger, they argue, is in citizen action, social movement, and the redirection of control from the companies and severely compromised, and often corrupt, chain of power back to the civilians themselves.

The proposed plan of action is to occupy political space, or “Occupy the Food System,” a social movement to include the voice of all people, rich or poor, in the decisions regarding their own food and nutrition.

“Human rights are perhaps the most efficient weapon for the combat against hunger,” Wolpold-Bosien told IPS. If we do not open political space and occupy political space for them and their voices, it’s very difficult to do something against the structural courses of hunger.”

An important step was made toward achieving the goal with the reform of the Committee on World Food Security (CFS) in 2009. According to the U.N. Food and Agriculture Organization (FAO), the CFS aims to be “the most inclusive international and intergovernmental platform for all relevant stakeholders to work together to ensure food security and nutrition for all.”

“So this is the point—we have to use those instruments that help people affected by hunger and malnutrition to raise their voices and to be more powerful.” Wolpold-Bosien told IPs. “And human rights is absolutely a strong tool because it is an obligation of states.”

The report is the fifth annual RTFN Watch. It was published by 15 civil society organisations and their partners with the intention of creating a platform for activists, media, and scholars to promote, advocate, and lobby for the right to food and nutrition.

It is also a tool to pressure national and international policymakers into prioritising the human rights of the civilian, especially because the RTFN Watch is the first and only of its kind.

“This report is human rights based and helps people to visualise their struggle at a global level,” said Wolpold-Bosien.