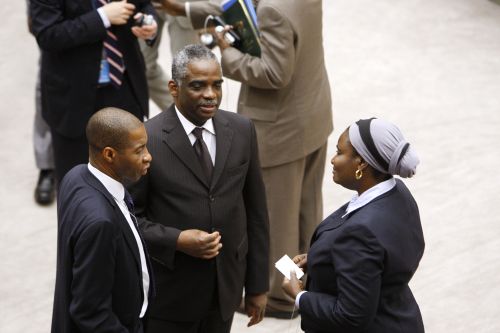 At the Security Council, both the United States and France forcefully backed the call for greater international involvement, as did several African leaders. But while France, the former colonial power in Mali, has for months spearheaded the push for foreign military involvement, the United States has been reluctant to formally back such an operation.

U.S. Secretary of State Hillary Clinton told the Security Council that the situation in Mali was “not only a humanitarian crisis” but “a powder keg that the international community cannot afford to ignore”. She appeared to hold back, however, from calling for an immediate intervention.

“The United States supports the appointment of a senior U.N. envoy empowered to lead a comprehensive international effort on Mali and the creation of a diplomatic core group,” she said. “We have to train the security forces in Mali, help them dislodge the extremists, protect human rights, and defend borders.”

Since late March, spurred by a power vacuum brought about by a coup in Bamako, Mali’s massive northern section has fallen under the control of several loosely aligned groups of ethnic Tuareg nationalists, Islamists, drug traffickers and opportunists.

Earlier this week, following long negotiations, the interim Malian government formally agreed to an intervention force from the Economic Community of West African States (ECOWAS). This ended the longstanding sense that the idea of foreign troops coming into Mali, while seeming increasingly inevitable, has nonetheless remained politically unpalatable, if not impossible, in Bamako.

Part of this has to do with a longstanding pride among Malians for having kicked out French troops prior to independence in 1960, since which time no foreign troops have been stationed in the country. In addition, there is widespread distrust within Mali even of ECOWAS, due to suspicions towards some of its constituents, particularly Cote d’Ivoire.

For the past month, ECOWAS has reportedly had some 3,300 troops on standby, ready to move into Mali following an agreement. In addition, France has offered logistical support for any intervention.

While this week’s deal was the most critical step towards a foreign peacekeeping mission, the deal still stipulates attaining United Nations backing. On Wednesday, however, initial reports suggested that the Security Council was divided on the issue.

While U.N. Secretary-General Ban Ki-moon on Wednesday told the U.N. General Assembly that Mali and its neighbours “need your attention”, he also warned, “Any proposed military solution … should be considered extremely carefully. This could have significant humanitarian consequences, including further displacement and restrictions on humanitarian access.”

Aid agencies, currently trying to help some 1.6 million people affected by insecurity in northern Mali, have repeated this warning, noting that in addition to the chaotic political situation in the area the entire Sahel region is struggling under a serious food crisis.

“Further fighting risks increasing humanitarian needs and forcing even more people to leave their homes, and could make it even more difficult for communities to access the aid they need,” Mamadou Biteye, West Africa regional director for Oxfam, an aid agency, said Wednesday.

“There is a major risk that military operations in northern Mali would make an already fragile humanitarian situation much worse. At a minimum, if such an operation is launched, all necessary steps must be taken to prevent civilian casualties and ensure respect for international humanitarian and human rights law.”

Oxfam is also warning against focusing on the Mali situation solely “through the narrow lens of counterterrorism”, noting that “sustainable peace and prosperity in the Sahel means tackling the conditions of chronic poverty, hunger and exclusion.”

Yet on Wednesday, Clinton made clear that the United States would continue to contextualise the situation in Mali in terms of counterterrorism. She also reiterated a demand that elections take place in Mali by April, saying this is “imperative”.

Both of these calls are wrongheaded, Gregory Mann, a historian at Colombia University, said Wednesday.

He adds, “Elections in this context strike me as a terrible idea. How do you hold an election when two-thirds of the country’s territory is under rebel occupation?”

Suggesting that the ECOWAS mission is now a near certainty, Mann points out that the situation has changed significantly over recent months. For instance, he no longer considers Mali’s territorial integrity to be in danger, a turnaround from the heady proclamations of secession that rebels made in May.

Still, Mann says that it is becoming increasingly clear that the current phase of fluidity will ultimately have long-lasting ramifications for Mali.

“I think what’s likely to be lost is the political form that the Republic of Mali represented, insofar as it was two things: it was a form of democracy, as imperfect as that was, and it was a secular republic,” he says. “It’s very hard to imagine at the present moment that … any political leader in the wake of an eventual constitutional convention could sustain the argument in favour of secularism. Likely, we’ll see some form of Islamic republic.”

For now, notes a new report from the International Crisis Group, a watchdog, without decisive international action by the end of September, “All scenarios are still possible, including another military coup and social unrest in the capital, which risks undermining the transitional institutions and creating chaos that could allow religious extremism and terrorist violence to spread in Mali and beyond.”

The report continues: “The country urgently needs to mobilise the best Malian expertise irrespective of political allegiance rather than engaging in power plays that will lead the country to the verge of collapse.”