ATLANTA, Georgia, Sep 27 2012 (IPS) - In the wake of the epidemic of home foreclosures, banking scandals and resulting massive financial regulation overhaul two years ago known as the Dodd-Frank legislation, the U.S. government created a new federal agency to protect consumers from being taken advantage of by banks and other institutions. 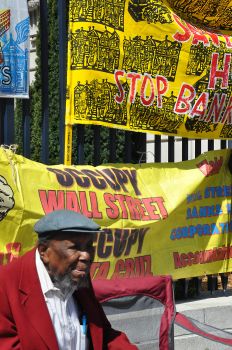 Known as the Consumer Financial Protection Bureau (CFPB), it’s operated for a year now, with mixed results, according to civil society groups that follow the issue.

“Obviously, the agency’s been stifled somewhat by Congress,” Jamie Court, president of the non-profit California-based group Consumer Watchdog, told IPS. “Given the scrutiny they face, and the budget limitations, they’ve done a good job of starting to break new ground on mortgage regulations and financial services regulations, disclosure for consumers.”

Republicans, particularly in the U.S. House of Representatives, have been vehemently opposed to the CFPB.

“It’s a very tough job in this political and budgetary climate. They’ve done a good job of letting the public know their doors are open. The question is, how responsive they are to petitions from the public, and how much can they do as quickly as possible?” Court said.

“They have a good staff that understands consumer protection. The real fate of the agency will be determined by the (November U.S. presidential) election. The election is really a mandate for this agency to go forward or not,” he said.

The CFPB is “pretty much what Obama got for the consumer out of financial reform, which was too little. It’s the first time we have a federal agency that’s there to protect consumer, not the bank, not the investor,” Court said.

Over the past weekend, the agency announced its second enforcement action in conjunction with the Federal Deposit Insurance Corporation (FDIC), ordering Discover Bank to refund approximately 200 million dollars to more than 3.5 million consumers and pay a 14-million-dollar civil penalty.

According to the CFPB, Discover Bank, one of the largest credit card issuers in the U.S., misled customers about whether there was a cost for the products, enrolled customers without their consent, and failed to tell customers about some of the eligibility requirements associated with payment protection benefits.

On Aug. 10, the agency proposed two new rules that will protect families who take out mortgages for their homes. These proposed rules are currently subject to a public comment period before final action will be taken.

The agency has also been collecting hundreds of comments from U.S. consumers regarding various complaints each week, and is encouraging consumers to submit complaints to the agency, including on its website.

“They’re being judicious in what they’re setting out to do. They’re not being a lightening rod for controversy – they’re doing sensible things on a sensible timeline. We’re very pleased by their agenda,” Linda Sherry, director of national priorities for Consumer Action, a San Francisco-based national consumer education and advocacy group, told IPS.

One of the benefits of the CFPB is that it gives U.S. consumers a single place to seek help with complaints regarding banking products and other financial products, Sherry said.

Previously, there were “too many cooks in the kitchen”, she said.

“This brings everything under the same roof. It’s easier for consumers to know who to go to for help. Beforehand, there were seven different agencies engaged in regulating the banking system,” she said.

Those agencies included the Board of Governors of the Federal Reserve, U.S. Department of Housing and Urban Development, FDIC, Federal Trade Commission (FTC), National Credit Union Administration, Office of the Comptroller of the Currency (OCC), and Office of Thrift Supervision.

The FTC, for example, would look for trends in the credit industry and credit reporting industry, sometimes bringing legal actions in conjunction with the U.S. Department of Justice. However, they would not respond to individual complaints.

“As far as banking complaints, any banks that were national banks were (previously only) regulated by the OCC. They had robust consumer complaint unit. However, what would come back to us many times, they (a consumer) would submit a complaint, it would be sent for review and it would come back,” Sherry said.

“The OCC would write a letter saying, ‘The bank doesn’t see there’s a problem. We can’t do anything,’” she said.

“Financial services are key to a person’s well-being, livelihood, and prosperity. We want to keep people from being ripped off. That’s why we’re very pleased to have a new national consumer watchdog on the beat,” she said.

Court believes that the CFPB should be acting more aggressively.

“It also has to start banning certain types of products because they’re dangerous. There are some obscene interest rates on credit cards being charged, also payday lending, a lot of toxic financial products. They’re going to be asked to deal with these by petition,” Court said.

“The real test of the agency will be what it does when presented with toxic products,” Court said.

Court applauded the recent enforcement actions against Citibank and Discover Bank. “It’s a great example. An agency can step in and get 200 million dollars back to consumers’ pockets. Before that you had to file a class action lawsuit,” he said.

Meanwhile, Elizabeth Warren, a Harvard Law School professor who came up with the idea for the agency, and who worked with interest groups and the U.S. Congress to bring the agency into fruition, also praised the Discover Bank action.

“I’m proud the Consumer Financial Protection Bureau is standing up for working families by holding major credit card companies accountable for deceptive practices,” Warren, who is currently the Democratic nominee for a U.S. Senate seat in Massachusetts, said in a statement sent to IPS.

“The new consumer agency is a strong advocate for hardworking men and women here in Massachusetts and across the country. The CFPB has been hard at work reducing the fine print in credit card agreements and assisting with consumer complaints… These actions will help protect families from financial tricks and traps and create a level playing field,” Warren said.