HAVANA, Oct 3 2012 (IPS) - Only 3.8 percent of the electric power generated in 2011 in Cuba came from renewable sources, compared to 18 percent in 1979 – a retreat that alarms experts, who fear for the system’s sustainability.

“Insufficient availability of electricity could slow down the country’s development,” researcher Conrado Moreno told IPS. “There is no question that the use of renewable energy sources is highly viable,” but investment and changes to Cubans’ everyday living habits are needed, he said.

The high international prices of fossil fuels mean that the use of “renewable energy sources has reached cost levels that make them competitive,” Moreno said. These sources are “unlimited, natural and freely accessible,” and they contribute to sustainable development and energy sovereignty, he added.

The fragility of Cuba’s national electric power system, which stems from its almost exclusive use of a single source, hydrocarbons, set off alarms in early September, when a breakdown in a high-tension line caused outages in eight provinces. 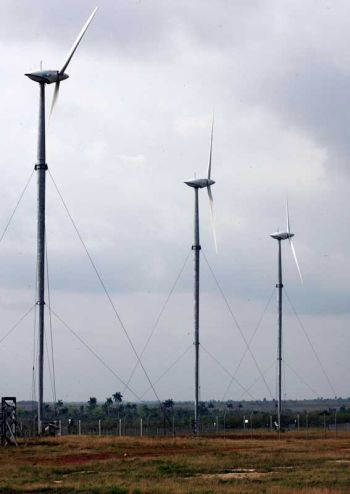 From the evening of Sept. 9 to the following morning, a break in transmission was reported for a 220,000-volt line that runs between the central provinces of Ciego de Avila and Villa Clara, according to a press release from the National Electrical Union (UNE) that was reported by the local media.

For a little over six hours, partial blackouts occurred in the provinces of Camagüey, Ciego de Ávila and Sancti Spíritus, while a total power outage occurred from Villa Clara to Pinar del Rio, leaving almost the entire western part of the island in the dark. The cause of the breakdown has not been reported.

“I saw almost all of Havana without power,” said Olga Palacios, a pensioner who lives in the Cerro municipality in the capital, who said the outage occurred as she was driving back from a visit to her daughter in the Miramar district.

In the capital “things have been stable; there were no major blackouts over the summer,” she told IPS.

Cubans have not forgotten the lengthy blackouts of the early 1990s, at the start of the economic crisis triggered when Cuba lost its main trading partner and oil supplier, the former Soviet Union. “We would go for more than 24 hours without electricity, and when it came back on, it would only last a little while,” Palacios recounted.

Ana San Juan, who lives in Mayabeque province, which borders the capital, told IPS that any problem with the electricity supply worries her. “We prepare our food with electrical appliances,” she pointed out. About 69 percent of Cuban families cook with electricity, which has caused demand for energy to skyrocket.

Moreno proposed three ways for the country to increase power generation: “increasing electricity production from fossil fuels, improving energy efficiency, and bolstering the use of renewable sources.” “An appropriate combination of these three elements is the key to success, because none of them can meet the objective on its own,” he said.

While the use of oil derivatives is still essential, steps should be taken toward reducing their use and eliminating the Cuban economy’s heavy dependency on these fuels, Moreno said. “There is no other way,” he added, recommending an increase in the use of solar, wind and hydraulic energy, among others.

Most of the electricity used in Cuba is produced in eight thermoelectric plants. The largest is the Antonio Guiteras plant in Matanzas province, about 100 kilometres east of the capital. Five years ago, the national electric grid was modernised with small and medium-capacity generators that mostly use fuel-oil, which is cheaper than diesel.

However, the authorities hope to “boost the use of different sources of renewable energy, basically biogas, wind and hydraulic energy, biomass, solar, and others, prioritising those that have the greatest economic impact,” according to the policy document for the economic reform process underway since 2007.

In the coming years, the national electricity system is expected to use more environmentally-friendly sources. Some 100 megawatts are expected to be generated from hydropower sources in the near future.

Likewise, the state electrical enterprise will soon be connected to its first solar photovoltaic power plant, designed to produce 1,500 megawatts/hour annually, without using a drop of oil. And in 2013, construction will begin on a 50-megawatt wind park in Las Tunas, 654 kilometres southeast of the Cuban capital.

According to an article by expert Mario Alberto Arrastra, “For the gradual predominance of renewable energy,” up to 600 megawatts from wind sources may be added to the power grid, although the system requires improvements so that more clean energy sources can be added. And for that, technology for storing energy is needed, Arrastra says.

Cuba has wind power potential of about 2,000 megawatts and further high potential in unexploited hydro-energy, and every square metre of the country receives an average of 1,800 kilowatt hours of solar energy annually, says Arrastra’s article, published in August in the local newspaper Juventud Rebelde.