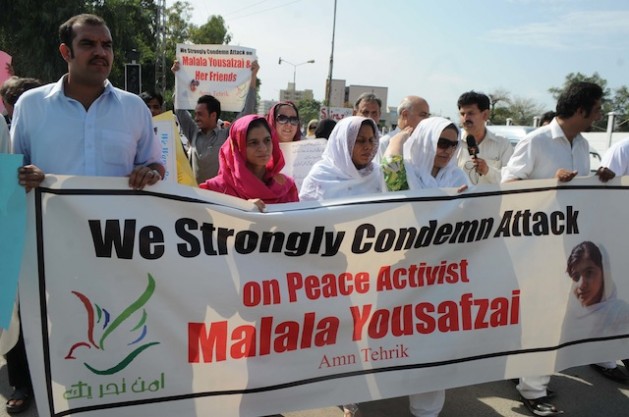 LONDON, Oct 24 2012 (IPS) - Less than two weeks after being left for dead by the Taliban, Malala Yousafzai is standing up on her own two feet.

Her remarkable progress, reported by doctors at the specialist unit of a brilliant hospital I know well – Selly Oak, Birmingham – reveals yet another dimension of the courage and resilience of the world’s most famous 14-year-old girl.

Today signatures of the Malala petition – led by the U.N. Education Envoy site, Avaaz, Women of the World and others, and reached on www.iammalala.org – are approaching one million. The petition calls for action to ensure every girl has a place at school in Pakistan and indeed around the world. It is directed to Pakistan’s President Asif Ali Zardari and to the U.N. Secretary-General Ban Ki-moon.

I will present the petition to the President during a trip to Pakistan on November 10, a month after  Malala’s shooting. This day has also been designated as a global day of action for Malala – and I call on you to make your voice heard in support of this amazing young woman and in support of the cause that she championed.

Malala’s story, portrayed in a film on www.educationenvoy.org, is being told around the world. Footage of her in tears explaining that she wants to be a doctor but is unable to go to school has understandably captured the imagination of girls everywhere.

Not just the British people, who are offering the best specialist medical care, but the whole world too is wishing Malala well. Determined to ensure that their message is heard at the highest levels of the Pakistani government, the campaign is being supported by friends of Malala wearing ‘I am Malala’ t-shirts across Asia and in the West.

Malala is being adopted as every child’s sister and every parent’s daughter. For one Malala shot and temporarily silenced, there are now thousands of even younger Malalas ready to come forward who will not be silenced.

We may not yet be seeing a 2012 Asian equivalent of an Arab youth revolt but the spontaneous wave of protests demonstrates that children are more assertive of their right to education than the leaders who promised to deliver it. Indeed the protests reveal a world no longer willing to tolerate the gap between the promise of opportunity for all and the reality of 61 million boys and girls shut out from even the most basic of primary schooling.

Just last week, a United Nations education audit that I launched with UNESCO director Irina Bokova exposed why for too long we have been too complacent in assuming inevitable year-by-year progress to universal education. 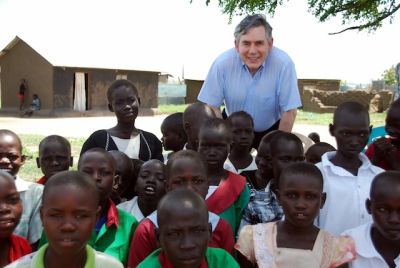 The report showed that despite a global commitment that every child would be in primary school by 2015, there are still 61 million children of primary-school age who are not in education, 32 million of them girls. The arithmetic of educational neglect makes grim reading. Fifteen million children who should be at primary school are working full time. Ten million girls every year leave education to become child brides, and millions more are trafficked.

In some areas of the world we are not just stalling, but sliding backwards. The UNESCO report will highlight how much we have neglected 28 million out-of-school refugee girls and boys, displaced children in the camps, tents, and shacks of broken-down regimes and conflict zones.

Yet today just 3 billion dollars of global aid goes to education, amounting to a meagre, shameful 12 dollars per child in Africa, hardly enough to finance a schoolbook and far less a teacher or a school. As need rises, aid is falling this year, and unless something is done, it will fall every year through 2015.

Yet because of a new initiative, Education First, launched last month by Ban Ki-moon, bringing together every U.N. and World Bank institution concerned with education, we can act quickly and ensure that Malala’s suffering will not be in vain.

Young people around the world should demand that each country where children are out of school prepare a national plan setting out exact teacher needs, and the building and financing requirements for achieving the 2015 target. At the core of each plan should be strategies for policing an end to child labour, child marriage, and discrimination against girls.

Malala may have been silenced temporarily, but her cause can never be silenced. This wonderful young woman is fighting for her life because she fought for the right of every girl to go to school. Now we must all fight for Malala’s cause.

[Gordon Brown is U.N. Special Envoy for Global Education and will visit Pakistan on November 10, when he will present the petition to President Zardari, and which he has declared a global day of action for Malala. You can add your voice at www.educationenvoy.org.]