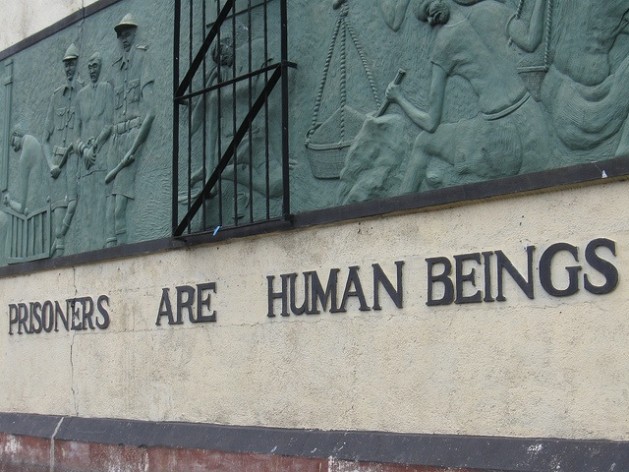 Amnesty International has found evidence of horrific abuses inside Mongolia’s prisons, such as torturing and starving detainees to death. Credit: Ranmali Bandarage/IPS

ULAANBAATAR, Nov 28 2012 (IPS) - Tucked away from the scrutiny of civil society, Mongolia’s jails epitomise the limits of democracy in this county of 2.8 million people, where marginalised members of society often bear the brunt of a corrupt and under-resourced justice system.

“Mongolia is a democratic country and has been for 22 years,” Geleg Baasan, a human rights activist who heads the Centre for Protection of Breaches on Human Rights (CPBHR), told IPS, referring to the country’s development following nearly seven decades as a Soviet satellite state from 1921 until 1990.

“But this democratic transition has not yet (extended) to the jails,” she said. Having been arrested five times during the course of her decades-long career as an activist, she speaks from firsthand experience of a discriminatory and corrupt legal apparatus.

According to Baasan, the most marginalised in Mongolian society tend to slip through the cracks and get lost in the country’s many ‘detention centers’ – pre-trial chambers that are even more dangerous than post-conviction facilities.

The famous activist became especially interested in the country’s prison system when, four years ago, “a child was locked up for seven years for stealing wine and a box of chocolates”.

Though Mongolian law states that citizens cannot be arrested without due process, the United States embassy’s human rights report for 2011 found “arbitrary arrest and detention” to be common.

The embassy also cited a United Nations report, which found that two-thirds of detainees in the capital city of Ulaanbaatar who were accused of criminal offenses had been arrested without court authorisation.

On the other hand, some groups were found to be above the law.

The U.S. embassy report noted, “Ultranationalist groups enjoyed impunity due to police complacency and unwillingness to apprehend the offenders. Ultranationalists targeted LGBT (lesbian, gay, bisexual and transgender) persons, Chinese, and Koreans with threats, violence, and the extraction of protection money.”

Otgonbaatar Tsedendemberel, director of the LGBT Centre of Mongolia, told IPS that exact statistics, such as the number of LGBT persons who have died as a result of violent attacks, are very difficult to verify since authorities and even family members are keen to cover up the issue.

His organisation currently documents cases of imprisonment and abuses of members of the LGBT community using the U.N. human rights framework on sexual orientation and gender identity.

Baasan agreed that tampering with death records is a common practice within the police force, courts and prison system. “A murder can be made to look like suicide – it happens all the time,” she said.

Conditions on the inside

In 2002, Amnesty International released a report detailing horrific abuses inside Mongolia’s prisons, such as torturing and starving detainees to death.

“Those with no connections usually starve because they can’t get as much food as other people and can’t get out of the prison as fast,” said Baasan.

Holding back food is also used as a way to force pre-trial detainees to “confess” to crimes they may or may not have committed, though this practice has been on the decline in recent years.

A lack of state funding for prisons also means some inmates go without food for longer periods of time.

Civil society and human rights activists have challenged the Mongolian government on these poor conditions and in 2003 a group of organisations and activists demanded that special representatives and social workers be assigned to look after prisoners’ needs.

In response the government assigned 70 staff members from the prison administration as social workers, with nothing more than 30 hours of training.

“They might as well have had no training at all,” Cyril Jaurena, from the Czech NGO ‘Caritas’, told IPS.

In 2011, one of those original social workers, Orosoo Purevsuren, lieutenant martialist of the Court Decision Enforcement Agency (CDEA) working in one of the pre-trial detention centres, came to Caritas in search of proper training.

Since 2003 Purevsuren has struggled to meet the legal and emotional needs of the prisoners, a gargantuan task given his lack of training and extremely scarce resources.

He told IPS that there are just 78 social workers and 26 psychologists for an inmate population of 5,899 prisoners in 24 prisons. “Counseling has been limited and we are working to address this,” he said.

According to Jaurena, “It can take up to six months for a prisoner to meet a social worker who often does not have answers to their questions.

“Some will say ‘I want to see my children,’ or ‘My wife is trying to sell my house – what can I do?’” Jaurena said, adding that most social workers are powerless to act on these grievances.

In an attempt to tackle this problem, Jaurena began a partnership with the Prosecutor’s Office of Mongolia, which has thus far been unsuccessful in compiling a comprehensive record of prisoners’ grievances.

Other than lamenting the quality of the food, prisoners seldom bring more serious complaints – such as reports of abuse at the hands of prison guards – to the Prosecutor’s Office, making it difficult for prison officials to verify and document human rights violations.

Now, with information supplied by NGOs and other non-state actors, “the prosecutor’s office is preparing to conduct a comprehensive survey, publish the results and hold a conference (about the findings)”, explained Jaurena.

“We are trying to establish international standards,” T. Munkhbayar, of the Prosecutor’s Office of Mongolia, told IPS at the project’s official launch on Oct. 30. “This is the first time civil society has worked with the government in the prison system.”

Caritas will oversee the project, while the CPBHR will mobilise its own pool of lawyers to provide legal training to social workers appointed by the Court Decision Enforcement Agency, assisted by licensed social work experts from the Prison Fellowship of Mongolia, an Australian NGO.

Though she has witnessed a great deal of corruption as an activist, Baasan feels hopeful.

“Mongolia looks very much like a democracy (from the outside) because the government has signed so many international conventions.  I have ten volumes of books about these conventions but they are not enforced and the lawyers that use them are extremely rare.”

She is confident that the election of the Democratic Party on Jun. 28, 2012, represents a turning of this tide. “We have a completely new government and I see it as a new era of democracy,” Baasan said.