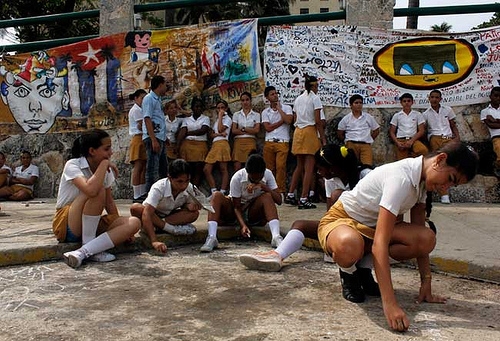 Many countries in Latin America have made progress in introducing sex education in schools. Credit: Jorge Luis Baños/IPS

HAVANA, Nov 13 2012 (IPS) - Learning about respect in a relationship, sexual orientation, sexuality, gender equality and family planning forms part of the right to sex education that is still not enjoyed by all children and adolescents in Latin America.

“They talk to us in school about teen pregnancy and safe and responsible sex,” Leonardo Martínez, a 12-year-old student in Havana, told IPS. “I did homework about children’s rights, and thanks to that we learned more about how important sex education is.”

However, Javier García, who is the same age, commented, “We have to talk more about other things,” after participating in a community meeting about violence against women as part of a national event that was held this month in eight Cuban provinces. “We experience these differences, but we don’t know how to deal with them.”

“Sexuality needs to be thought of in terms of pedagogy and human rights. We need to move from a medical approach to a more educational approach,” said Argentine sexologist Mirta Marina, coordinator of her country’s National Programme for Comprehensive Sex Education.

Latin America is “going through a process of development” in this field, but “it still has many restrictions, mostly because of the conservatism that has been passed down for centuries, which makes it difficult to talk about these matters within the family and at school,” Marina told IPS in Havana, during a regional meeting on comprehensive sex education.

In classrooms and other educational spaces, teaching staff should provide guidance about sexuality with the goal of promoting health. “But we have to progressively add other aspects, such as gender equality, respect for gender diversity, and the elements of affection, expression of feelings and pleasure,” she added.

In her opinion, “it is a battle that will continue, to a lesser or greater extent, based on the progress made in each country. We have to work more on the rights of boys and girls to enjoy their bodies and gender equality.”

A 2011 study published this year by the nongovernmental organisation Mesoamerican Coalition for Comprehensive Sex Education found more progress was made in health than in education in implementing the Mexico City Ministerial Declaration – “Educating to Prevent.”

This agreement, which was signed in 2008 by 30 health ministries and 26 education ministries from Latin American and the Caribbean, outlined paths to curb the spread of HIV/AIDS.

The countries committed themselves to achieving two major goals by 2015: cutting in half the number of adolescents and young people who do not have access to health services that fully meet their sexual health needs, and reducing by 75 percent the number of schools — under ministerial jurisdiction — that do not provide comprehensive sex education.

According to the study, which covers the 2008-2011 period, the Mesoamerican region — southern Mexico and Central America — advanced by 49 percent in implementing that strategy, and South America made 41 percent progress. However, it did not include Brazil or the Caribbean islands.

The countries that made the most progress were Colombia, Argentina, Guatemala and Costa Rica. And bringing up the rear were Panama, Belize, Paraguay, Bolivia and Venezuela, the study found.

According to the United Nations, in Latin America some 68,000 adolescents (10 to 19 years old) are living with HIV/AIDS: 34,680 of them female and 33,320 male. And more than half of new HIV cases worldwide due to sexual transmission are detected among young people between the ages of 15 and 24.

In recent years, teen pregnancy rates have shot up in the region, exceeded only by those of Africa.

The Economic Commission for Latin America and the Caribbean reports that adolescents in the region accounted for 14 percent of births between 2000 and 2005 – nearly double the proportion of previous five-year periods.

And in Bolivia, 18 percent of mothers were 12 to 18 years old in 2008. But by 2011, that number had increased to 25 percent, according to the U.N. Population Fund, which on Nov. 14 will publish its annual world report focusing on the links between family planning, human rights and development.

That is why governments must guarantee sexual and reproductive rights from an early age, Uruguayan Dr. Stella Cerruti told IPS.

However, it is a slow process, and a subject of debate between specialists, politicians and the population in general, she said.

While many countries in the region have national programmes or have signed regional and international agreements, the reality is more complex.

Some religious groups and many parents are opposed to sex education in schools, and governments do not always put a priority on the issue, Cerruti said.

Cuba’s National Centre for Sex Education (CENESEX) organised a gathering of 57 Latin American experts and activists in Havana Nov. 5-7 to review strategies and strengthen alliances in “comprehensive sex education with an approach based on gender, human rights and diversity.”

Civil society organisations “have an important role to play in social auditing and pressing governments to enforce legal frameworks on sex education,” activist Roberto Luna told IPS. “They can also provide them with specialised technical assistance,” added the founder of Incide Joven, a Guatemalan network that promotes political participation on the issue.