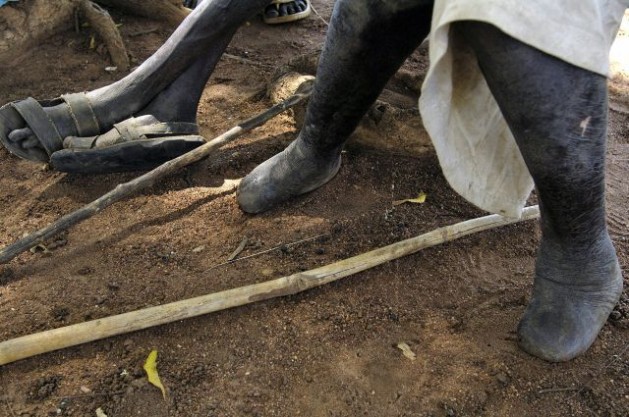 Residents of Sudan's Luri-Rokwe leper colony, which houses approximately 3,000 residents. The stigma of leprosy puts the people on the margins of society where they are reliant on limited food aid and other assistance while living in makeshift shelters. Credit: UN Photo/Tim McKulka

WASHINGTON, Dec 3 2012 (IPS) - International financial support aimed at counteracting the world’s “neglected diseases” increased by nearly a half-billion dollars over the past five years, according to new research released Monday, but changing funding dynamics could already be having a negative impact on the development of cures for diseases that affect a substantial proportion of the world’s poor.

More worrying, funding for research into these diseases remains highly dependent on a tiny number of players. This particularly includes the United States – both the public sector, in the form of the National Institutes of Health, and the philanthropic sector, in the form of the Bill & Melinda Gates Foundation – which continues to fund around 70 percent of investigations into these diseases.

The neglected diseases include a few dozen – leprosy, Guinea worm and other parasitic, viral and bacterial infections – that largely affect only poor communities in poor countries, and hence have traditionally received little attention from the entities that bankroll the extremely expensive process of drugs development.

While funding for these diseases had begun to pick up, the new Global Funding of Innovation for Neglected Diseases (G-FINDER) report finds that this assistance has decreased again following the international financial crisis.

Beyond the U.S. institutions, the report warns that the rest of this funding, which together accounts for just one percent of overall global disease-related research funding, comes from just a few European countries and one other philanthropy, the London-based Wellcome Trust. (The G-FINDER report itself is funded by the Gates Foundation.)

Meanwhile, the only non-Western country to make it into the top 10 funders for neglected disease is India (which recently overtook Brazil), which on average has spent around 5.6 million dollars per year on related research.

The new report “highlights our heavy reliance” on just a few institutions, Dr. Peter J. Hotez, president of the Sabine Vaccine Institute, a non-profit organisation based here in Washington, told IPS in an e-mail. “It’s a wake-up call that we need to engage new actors, including some new foundations, and to encourage some of the emerging market economies and some of the Middle Eastern nations to become more involved.”

Although overall funding for neglected diseases has gone up by 443.7 million dollars, to about 2.9 billion dollars, since 2007, both public and philanthropic shares have gone down substantially. This is worrisome given that the public sector continues to make up around two-thirds of international funding for such research, almost all from high-income countries, and more than half of the top 20 governments cut their funding for such research in 2011 alone.

While the U.S. government remains the single largest public funder of research into neglected diseases (following only the Gates Foundation), Washington too cut its outlay in 2011, down 2.2 percent to around 30.6 million dollars.

“Some governments now appear to be in it for the long haul, which is great,” Dr. Mary Moran, one of the report’s authors and the executive director of Policy Cures, a London-based research group that published the G-FINDER, said Monday in unveiling the report.

“But we’re worried that their investment model seems to be shifting back to the ‘bad old days’, where the public sector funded basic research leaving product development to industry or philanthropy – and consequently almost no medicines, vaccines or diagnostics for neglected diseases were developed. This model doesn’t and can’t work for truly neglected non-commercial diseases.”

According to findings by Policy Cures, over the past five years, public money for basic research has increased by more than a quarter, to around 124 million dollars, and currently makes up about a third of all public investment in neglected diseases. Meanwhile, public investment in the costly and uncertain product development has actually gone down slightly.

Moran compares this model to putting a man on the moon, for which one needs both scientists to do the research and someone to actually build the physical rocket.

“Governments need to bite the bullet,” she says. “If they want products for neglected diseases, they need to fund product development as well as basic research, and their funding needs to be linked to what’s happening in product pipelines and to be prioritised based on need.”

The private sector in recent years has indeed shifted its research focus away from three of the most high-profile diseases – AIDS, malaria and tuberculosis – to instead focus on a second tier of “semi-commercial” diseases, including dengue and meningitis, which today receive about a quarter of global spending.

Yet according to the new report, funding for research for the third tier of diseases, including leprosy, trachoma and rheumatic fever, remains miniscule, with each receiving less than 0.5 percent of international commitments.

Meanwhile, funding from major philanthropies has also declined significantly in recent years, from 691.6 million dollars in 2009 to 551.4 million dollars in 2011. Much of this can actually be traced back to changes in funding flows from the Gates Foundation itself, which makes up around 80 percent of the sector’s contributions – again underlining the danger of relying so significantly on just a handful of donors.

“The lack of private-sector research and development for neglected diseases reflects the core problem that today’s R&D model relies on market incentives and high prices for a return on investment,” Dr. Manica Balasegaram, executive director of the Médecins Sans Frontières Access Campaign, said in a statement Monday.

“The G-FINDER survey clearly shows that steady funding for neglected diseases is vulnerable, making it essential that we agree to ways of promoting (research and development) through predictable, sustainable funding solutions.”

Although another round of discussions took place last week at the World Health Organisation towards a possible treaty on research and development, which would allow for greater coordination, the talks resulted in little movement.

Balasegaram called the negotiations a “profound disappointment”, noting that, despite of a decade of such attempts, governments merely “kicked the can down the road, agreeing only to business as usual for another four years.”