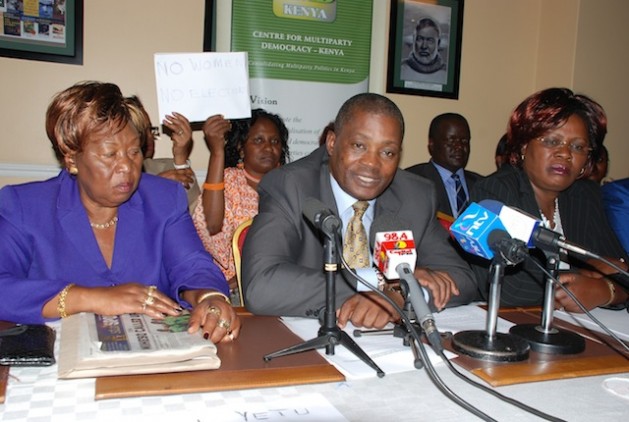 NAIROBI , Dec 14 2012 (IPS) - Kenya’s rights activists are furious that the country’s highest court “violated” women’s constitutional rights by ruling against the implementation of a gender quota in parliament ahead of the 2013 general elections.

Activists here are threatening to boycott the Mar. 4, 2013 elections and bring the government to a standstill unless the gender parity law, which states that no more than two-thirds of one gender should hold elected office, is enforced in the senate and national assembly in the upcoming elections.

Rukia Subow, chair of Maendeleo Ya Wanawake Organisation, the largest women’s rights NGO in Kenya, told IPS that this East African nation was headed for a constitutional crisis if it failed to heed the provisions of the 2010 constitution.

The Kenya Supreme Court ruled on Tuesday, Dec. 11 that the constitutional provision calling for a mandatory one-third gender representation would not apply to next year’s general election and instead should be implemented progressively by August 2015.

“We respect the Supreme Court, but still we have to fight its ruling even if it means going to higher courts in the region. We will ensure that there will be no parliament next year as it will be unconstitutional should we fail to implement the gender principle,” she said, adding that the organisation would see to it that the principle was implemented by “any means necessary.”

As the Supreme Court is the highest court in the country, the next court of appeal would be the East African Court of Justice.

Article 81 (b) of the constitution provides that “not more than two-thirds of the members of elective public bodies shall be of the same gender.”

Further, Article 27(8) of the constitution states that there shall be legislation to provide for the above principle. But the failure of parliament to pass this legislation prompted the attorney general Githu Muigai to petition the Supreme Court for an interpretation on how the country should attain the gender equity principle.

In the landmark decision by four of the five judges hearing the case, Jackton Boma Ojwang, Njoki Ndung’u, Philip Tunoi and Smoking Wanjala ruled that the one-third gender requirement for the national assembly and senate could not be enforced in the 2013 elections.

They said that the historical marginalisation of women in elective politics could not be resolved by quotas but would only be realised over time and in stages.

The fifth judge on the bench, the country’s chief justice Willy Mutunga, ruled in favour of the principle being implemented ahead of the upcoming elections.

According to Rose Waruhiu, a prominent Kenyan women’s rights activist and former member of the East African Legislative Assembly, the ruling is a blow to the empowerment of women.

“The women of Kenya are seeing this as a blatant and direct violation of women’s constitutional rights of equality and non-discrimination based on sex. The ruling makes a charade of the whole idea of constitutionalism and is the ultimate insult to Kenyan women, women around the world, and in essence the Kenyan people,” Waruhiu told IPS.

The Centre for Multiparty Democracy Kenya has consequently advised political parties to immediately file a case with the East African Court of Justice, to force Kenya to observe gender equality in elective and appointive public positions.

According to the lobby’s chair, Justin Muturi, Kenya “is the only country within the East African community which has not (achieved) this.”

“We have resolved to sensitise Kenyans around the theme ‘no women, no elections on March 2013’, unless and until women are included in public office as stipulated in the constitution,” Muturi told IPS during a press conference in Nairobi on Thursday Dec. 13.

Meanwhile, Waruhiu said the court ruling was a fraudulent act.

“It has set women back in a big way. More importantly, however, it’s not a women’s issue, but an issue at the heart of our constitution. It’s about the affront to the sovereign will of the people,” said Waruhiu, who is also the vice chair of the Democratic Party of Kenya.

“Women of Kenya do not, and will not, accept a zero or minimalist approach in terms of the fulfilment of their constitutional rights. They are entitled to them as a matter of course, they fought for independence, and they continue to carry the greatest burden in building this nation,” she said.

Her comments were echoed by Winnie Lichuma, the chair of the National Gender and Equality Commission, the body charged with women’s empowerment in Kenya. She told IPS that women must demand that the principle be implemented immediately and not in stages.

“The gender equity principle on representation must be implemented now and can’t wait,” she said. Political representation for women in the current Kenyan parliament is considered low at only 9.8 percent, according to Lichuma.

Prior to the controversial ruling, the country was awash with heated debate about how the principle could be achieved.

“This action by the highest court in the land of Kenya, if left uncorrected, would widen the inequality gap between men and women in leadership positions,” said Waruhiu.