Paediatricians for a Healthy Environment 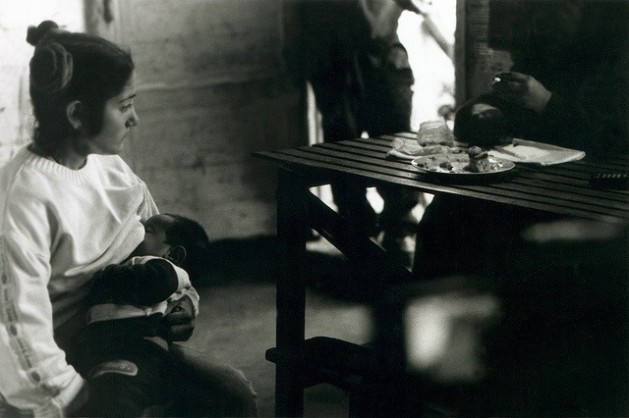 Paediatricians in Argentina are working to protect the environment in order to provide better child healthcare. Credit: Malena Bystrowicz/IPS

BUENOS AIRES, Jan 4 2013 (IPS) - A group of Argentine paediatricians has been combining work on environmental protection and child health for more than 10 years. It appears a basic principle to apply, but the task is turning out to be increasingly challenging and complex.

“We can’t clean up a river, or give a family a new house, but we can teach people to put chlorine in the water,” Dr. Stella Maris Gil, the coordinator of the Environmental Paediatric Unit (UPA) at the Pedro de Elizalde Children’s Hospital in the Constitución neighbourhood of Buenos Aires, told IPS.

The UPA provides health care with a strong environmental component, educates the public using the hospital, trains doctors and carries out research, explained Gil and other paediatricians belonging to the unit.

“The idea arose in the 2001 crisis,” Gil said, referring to the economic and social collapse at the end of that year, when poverty and unemployment reached unprecedented levels in Argentina and also had an impact on health.

“We were seeing a lot of illness connected to poor living conditions: respiratory diseases, gastroenteritis, skin infections … So we decided to give courses on the impact of environmental pollution on health, and we devised a project aimed at protecting the environment in order to provide better health care for children,” she said.

The project, which gave rise to the UPA, had a healthcare component “with strong environmental awareness,” Gil said, “and also a component for educating the public, another for training our colleagues and ourselves, and one for researching environmental topics.”

The hospital authorities accepted the proposal, and in 2005 it was adopted by the government of the Autonomous City of Buenos Aires. The first UPA was created, and the model was later reproduced in other hospitals in different parts of the country.

At first, colleagues looked askance at members of the unit, but as information about climate change spread, they began to treat the unit members with growing respect and consult them for advice.

This type of unit exists in other countries, like the United States, Canada, Mexico and Spain. The World Health Organisation (WHO) recommends formation of the units to focus the attention of health professionals on the stage of life that is most vulnerable to the effects of pollution.

The paediatricians are motivated by the concept that children “are not just small adults.” Their organs are in the process of developing, and their physiological and metabolic systems are immature. This is even truer of foetuses in the womb, where damage can be irreversible or fatal, the experts warn.

As well as seeing patients and acting as consultants when doctors suspect disease or symptoms of exposure to pollution, the UPA paediatricians spend a lot of time working with families on preventive health care.

“Doctors are trained to work with illness, but the main thing is prevention,” said another of the doctors on the team, Graciela Masu. “In recent years there has been a change in attitudes; previously, medicine was regarded as identical to health,” she said.

The UPA holds workshops to train colleagues; gives talks to family members in the waiting room while they wait for their children to be seen; and promotes projects like replacing mercury thermometers or limiting prescriptions of examinations that involve exposing patients to radiation.

Mercury thermometers are extremely polluting if they break. The campaign led to their replacement, first in the hospital, and then in other clinics and hospitals. The city government no longer purchases them, Masu said. However, achieving change is not always a simple matter.

“In our role as doctors, we can advise mothers about the best living conditions for their children’s development, about the importance of hygiene, of not smoking, of clean water tanks, about consumption and waste disposal,” Masu said.

“We don’t concern ourselves with eradicating waste dumps because that is not something we are responsible for. What we try to do is to improve the interior environment,” she said.

Another important campaign they carried out was aimed at limiting the use of ionising radiation, which is used in X-rays, radioscopy and tomography. “Children are more vulnerable to this radiation, which can leave them more prone to developing leukaemia or thyroid cancer,” Gil said.

She said medicine cannot do without these diagnostic tools, but it is necessary to raise awareness about “the rational and justified use” of these tests in the fields of neonatology or paediatrics.

They are also campaigning about the effects of ultraviolet radiation, a key issue in a country that is affected by the thinning of the ozone layer, which allows harmful radiation from the sun to reach the earth’s surface, causing skin damage if proper protective measures are not taken, particularly in young children.

But the pollutant that causes most concern is tobacco smoke, which pollutes air inside homes and causes respiratory illnesses in children. “Cigarettes are the greatest scourge because they result in premature births, low birth weight and infant mortality,” said Gil.

Then there is the issue of managing waste, which in shantytowns piles up in the open and pollutes air, soil and groundwater; and pesticide use. “We see a lot of parasitic diseases, infections, and vector-borne illnesses like dengue or hantavirus,” one of the doctors says.

More serious diseases make up a smaller proportion. “It’s not always possible to relate a serious disease to pollution, although it often is possible to find traces of lead, benzene and other chemicals in blood, urine or hair. But in order to find them, we have to look for them,” she said.

Gil said that threshold levels of particular pollutants used to be tolerated, but nowadays the view in paediatrics is that any exposure may have short, medium or long term effects. At present the hospital has seven cases of gastroschisis, a congenital defect of the abdominal wall, which is being seen more frequently than a few years ago, she said, and may be related to maternal exposure to pollutants during pregnancy.

Gil said the UPA relies heavily on the work of the toxicology department, which advises on requesting complementary tests based on particular symptoms or suspicions.

Yet another problem linked to the environment and living conditions is alcohol and drug abuse among pregnant teenagers, which exposes both mother and child to risks in their future development.