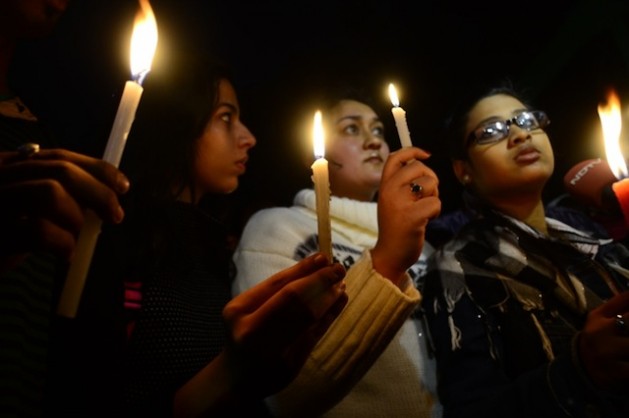 NEW DELHI , Jan 21 2013 (IPS) - On a chilly Wednesday evening, exactly a month after a young woman was gang-raped and brutalised on a moving bus in New Delhi, hundreds of sombre citizens gathered at a candlelight protest in India’s national capital.

They had come to remember the victim who, 13 days after the assault on Dec. 16, succumbed to internal injuries in a hospital in Singapore – but not before igniting a nation to rise against an epidemic of sexual violence that has long plagued this South Asian country of 1.2 billion people.

Anger was palpable among the mourners assembled peacefully at the city’s iconic protest venue, known as Jantar Mantar, to pay tribute to the 23-year-old medical student Jyoti Singh Pandey, who is now referred to as “Braveheart” and “India’s daughter” after her valiant fight against six male attackers.

But the massive wave of protests and insistent calls for justice that followed the tragedy has not been a sufficient deterrent to violence: a series of gang-rapes, including a few inside buses, have been reported across India in the last few weeks.

The brutality of these assaults is almost directly proportional to the passion of the protests, activists and experts here say.

As a result, crowds have gone from demanding justice to demanding death: the “We Want Justice” slogan popularly printed on placards and banners has been replaced by the mantra: “Hang the Rapist”.

Following an explosion of street protests, social media exchanges and politicians’ remarks – ranging from assurances to platitudes and polemics – the primary debate now raging across the country is whether or not the death penalty can end, or at least reduce, such horrific attacks on women.

The debate does not spring from a void, but rather from intense frustration.

For the past month, Indian authorities have struggled to pacify urban protestors with promises of legal amendments and enhanced security for women; but even as politicians spoke from podiums and police poured into the streets, brutal attacks continued unabated.

In the northern state of Punjab, a woman was gang-raped inside a bus in early January, while in the northwestern Rajasthan state a young girl killed herself after police browbeat her for lodging a sexual assault complaint.

In Goa, a seven-year-old was raped inside a school toilet.

The case against the death penalty

The question of rape has forced politicians and scores of citizens to grapple with the limitations of the country’s justice system.

India’s Women and Child Development Minister Krishna Tirath said laws should be changed to include death as a penalty for rape in the most brutal cases that leave the victim incapable of leading a normal life, while India’s leader of opposition in Parliament, Sushma Swaraj, who hails from the Hindu nationalist Bharatiya Janata Party (BJP), pleaded with the Prime Minister for capital punishment.

Such political grandstanding has found support among many citizens who are angry with the rising number of assaults. A recent survey found that 100 percent of women respondents feel that solving the problem of women’s insecurity is India’s single greatest challenge.

“It’s absolutely rubbish to say that these people (the attackers) are human and deserve to be kept alive at the taxpayers’ expense,” New Delhi-based media professional Sanchita Guha told IPS.

“It (capital punishment) also brings a sense of closure to the victim,” she argued.

However, a majority of women’s groups are opposed to the death penalty or even chemical castration for rapists, demanding instead assurance of rigorous punishment for offenders who almost always get away scot-free owing to legal loopholes and an insensitive judiciary.

Kavita Krishnan, one of the most prominent faces of the New Delhi street uprising against rape and secretary of the All India Progressive Women’s Association, told IPS, “All this talk of the death penalty is a big red herring to divert attention from gender crimes to severity of punishment.”

“The death penalty is no solution for a country with misogynistic laws. There is no evidence anywhere in the world to prove that the death penalty lessens rape or, for that matter, deters anyone from committing any other crime.”

If at all, the death penalty could be a deterrent to harsh sentences against offenders, “since the courts would be overcautious before passing such a verdict,” according to Krishnan.

“In India a large number of sexual assaults also take place at home, by close relations. There would be intense pressure on the victim to not file the complaint in the first place, if there is a death penalty,” she said.

“Conviction rates should go up in India and debate should be about surety of punishment and gender-sensitive laws.”

Currently, rapists face a minimum of seven years in jail under Section 376 of the Indian Penal Code (IPC), a sentence that can extend from ten years to life imprisonment depending on the severity of the case.

Under Section 375 of the IPC, rape is defined only as intercourse involving penile penetration but does not include forced oral sex, sodomy or penetration by a foreign object, which can cause more grievous injury, experts say.

These acts are placed under Section 354 of the IPC dealing with “criminal assault on a woman with intent to outrage her modesty” and Section 377 of the IPC, covering “carnal intercourse against the order of nature”.

According to Ranjana Kumari, director of the New Delhi-based Centre for Social Research (CSR), attaching the death penalty to rape could mean that the offender gets no punishment at all, since death row prisoners are allowed to file clemency petitions before the President who has the power to commute the sentence.

“If the death penalty is implemented, the judicial scrutiny will be very long as well. There are already about 95,000 cases pending in various courts and it is impossible to implement capital punishment in large numbers,” Kumari told IPS.

“We want severe punishment, which includes rigorous imprisonment, because otherwise it will be only a choice between no punishment or death as penalty,” she stressed.

Rape cases in India currently have a 26 percent conviction rate, she said. “We also found that no one gets more than three to four years in jail.”

Following the protests over the Delhi gang-rape, the government appointed a three-member committee of jurists to make recommendations on amending laws to increase the quantum of punishment and ensure speedier justice.

In its suggestion to the committee, prominent human rights group Amnesty International appealed for “penalties that reflect the gravity of the crime, but without recourse to the death penalty, or any other punishment which violates the absolute prohibition of torture and other ill-treatment, such as physical castration or non-consensual ‘chemical castration’.”

As the leading women’s rights lawyer, Flavia Agnes, argues, the death penalty could even prompt the rapist to kill his victim.

“If punishment for rape and murder is the same, many rapists may kill the victim to destroy evidence,” she told IPS.

Instead, “We should find answers from our parliamentarians and experts about how we can make our public places safe for women,” she said.