Gordon Brown, UN Special Envoy for Global Education and former Prime Minister of Britain says this will be the year when the demand of girls for a right to an education will move to centre stage of the international arena. 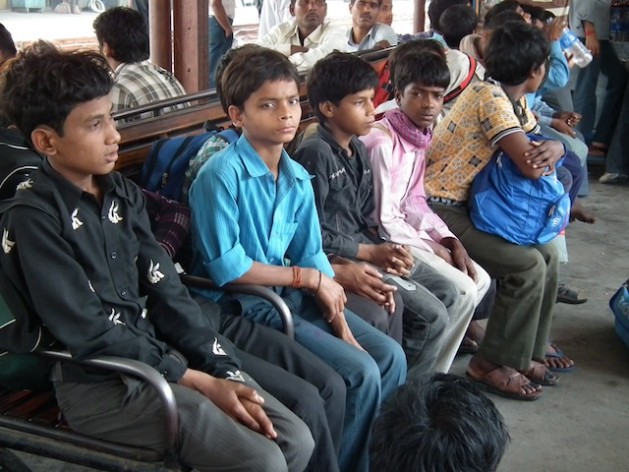 Child labourers rescued in Delhi waiting to be sent back to their villages. Credit: Bachpan Bachao Andolan.

LONDON, Feb 22 2013 (IPS) - Next Monday, after more than two months of public anger against the rape of a young Indian student, the Indian Parliament will consider new legislation to toughen up judicial and police provisions addressing violence against women.

And as India demands that more is done to protect the rights of girls and young women, there is the chance of eliminating another form of brutal exploitation. Child trafficking and child slavery will for the first time be defined in legislation in India – with a view to outlawing them altogether.

These demands of Global March Against Child Labour and its Indian co-partner, Bachpan Bachao Andolan, have not only been incorporated in the high level judicial committee constituted to suggest amendments in the Indian criminal legislations, but also included in the Ordinance signed by the President of India.

If we are to succeed – and if India is to lead the way in abolishing these practices globally – the same popular pressure that has brought about the changes in anti-rape laws is now needed to persuade Indian parliamentarians to force an end to the enslavement of children in this way.

Today I invite everyone concerned about the abuse of the rights of boys and girls around the world to add their names to the petitions that we will put to the Indian Parliament urging its members to put an end to child slavery.

The plight of these children is highlighted by the personal tragedy of a 14-year-old girl, Ratni. Her predicament represents everything we are trying to change.

I have been told the true identity of Ratni – one of some 500 Indian girls who every day fall into the hands of slave traders. We are protecting her name because although she has now been freed and reunited with her parents, her sister remains in slavery, still subject to a life of abuse as a bonded labourer – without school, without security from assault and violation, without hope.

Ratni’s story symbolises the urgent need to push for an immediate end to all forms of child labour. I believe we can make a change in the law in India a significant step towards abolishing child slavery across the world.

Ratni was trafficked from a village in Jharkhand in the east to Delhi where she was forced to work as a domestic servant from dawn till dusk.

Her story unfolds in an all too familiar way. A family friend, Subhash, approached her parents, offering their daughter a better life with the promise of both paid work and an education. When she reached Delhi, neither awaited her. Ratni was handed over to Subhash’s younger brother, Ramesh, who placed her in bonded labour.

After a year she was moved on to the Punjab by her slave master where he repeatedly forced himself on her. Ratni tells us: “He had planned to sell me off to a man for Rs 350,000 but the buyer did not have sufficient cash.” While she was in transit at a railway station she was rescued by Bachpan Bachao Andolan, a movement founded by Kailash Satyarthi.

This story has a better ending than most – Ratni was not, in the end, sold into prostitution. Her experience outlines, though, a regular pattern: parents who live in poverty believing their child was being offered a better life by a family friend who turns out to be a trafficker. A young girl not only subject to cruel exploitation as a slave but vulnerable to sexual exploitation and violence, too.

Due to pressure from Kailash and his team, the traffickers have been forced to pay compensation to Ratni. However 200,000 Indian girls like her are trafficked into child slavery every year, joining some 215 million children condemned to child labour worldwide.

The problem is wide-ranging as children are made to work not just as domestic slaves but often in dangerous industries – from agriculture and construction to tin, gold and coal mining and factory production. It’s believed that at least 115 million of these children are working in hazardous conditions. They spend their days in fields, mines, kitchens and on building sites, prevented from getting the education they need to prosper.

Research shows that even where they receive some part-time schooling, it is of poor quality, and attainment is significantly hindered. Worse still, each year 15 million children under the age of 14 don’t receive a single day of schooling because they’re forced to carry out full time work. Their childhood is completely lost, their innocence destroyed and their potential thwarted.

Progress is already being made. The Ordinance which strengthens the laws against child trafficking and forced labour was signed by the President of India, Pranab Mukherjee, earlier this month. This is a significant development in India’s penal system, making it easier to punish those caught enslaving children and deter abusive employers like Subhash and Ramesh. But now, it must be passed by the Indian Parliament.

More though has to be done – and this is where popular pressure can play its part. The bill before the Parliament would outlaw all child labour under 14, as well as many hazardous forms of work for those under 18. This vital legislation would help ensure children are moved from the old oppression they now suffer to the new opportunities they should have the right to enjoy.

Some 750,000 have already signed the petitions we are putting to the Indian Parliament this month. We are asking the Parliament to agree this new law be brought in immediately. Please join them.

Double their number and let us ensure that from around the world many more than one million voices are heard calling for an end to child labour and trafficking and the evil practices that ensure that, even in the twenty-first century, slavery thrives.

You can watch a film of Ratni’s story at www.educationenvoy.org and add your name to the petitions supporting the Indian legislation at Avaaz and Walk Free.