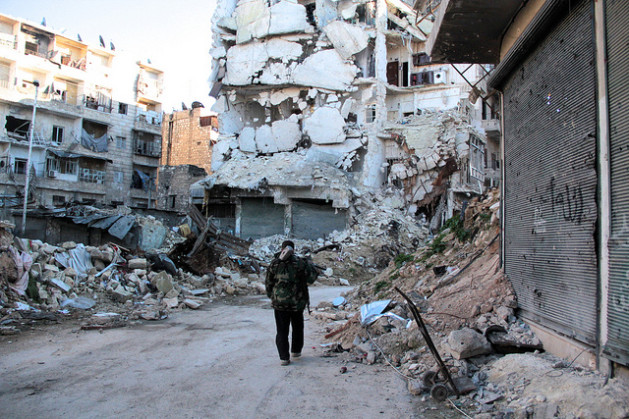 In Aleppo, Karm al Jabal. This neighbourhood is next to Al Bab and has been under siege for six months. Mar 4, 2013. Credit: Basma/cc by 2.0

WASHINGTON, Mar 22 2013 (IPS) - As the Syrian uprising enters its third year, the United States and its allies are preparing to materially increase their support of the armed opposition in Syria.

Secretary of State John Kerry pledged an additional 60 million dollars in direct aid to the rebels, marking the first time Washington will directly supply rebel forces, but the administration appears as wary as ever to get more directly involved.

The CIA is on the ground helping sort out who should get money, and they’re training people in Jordan. The idea is, they don’t want to get involved any further.

The provision of battlefield materiel has been met with some support from hawks who have pushed for greater military intervention, though many policymakers have urged the president to go even further. Exhortations for intervention have increased since rumours began of a chemical weapons attack in Aleppo. Though U.S. officials have largely dismissed the reports, many members of Congress expressed concern about the use of weapons of mass destruction in Syria.

On Monday, Rep. Eliot Engel, the most senior Democrat on the House Foreign Affairs Committee, introduced legislation that would authorise funding for “limited lethal assistance” to Syrian opposition groups, assuming that the groups would be carefully vetted in the process.

Meanwhile, Senate Armed Services Committee Chairman Carl Levin concluded a Senate hearing on Syria by stating that a no-fly zone would “be helpful in breaking the deadlock and bringing down the Assad regime”.

During the hearing, Senator John McCain reiterated his long-held position that the U.S. should intervene more directly in the uprising. Levin and McCain have signed on to a letter urging President Obama to establish no-fly zones and provide more military aid to rebels.

Both the House legislation and the Senate letter were applauded in a press release Thursday from the Foreign Policy Initiative, the think-tank successor to the neoconservative Project for a New American Century: “This week, key members of Congress stepped into the void of U.S. leadership on the Syria conflict, calling for action to end the Assad regime’s slaughter of the Syrian people and avoid an even greater regional catastrophe.”

But the boldest military endorsement thus far came from Senator Lindsey Graham, who responded to rumours of the chemical attack by stating, “You’ve got to get on the ground. There is no substitute…I don’t care what it takes…I vote to cut this off before it becomes a problem.”

The Obama administration and senior military officials have pushed back against this type of involvement. Chairman of the Joint Chiefs of Staff Martin Dempsey said earlier this week, “I don’t think at this point I can see a military option that would create an understandable outcome. And until I do, it would be my advice to proceed cautiously.”

Phyllis Bennis, director of the New Internationalism Project at the Institute for Policy Studies, warns that this should not be taken to imply that the appetite for any intervention is low.

“They’re clearly already involved in the armed opposition,” Bennis told IPS. “The CIA is on the ground helping sort out who should get money, and they’re training people in Jordan. The idea is, they don’t want to get involved any further.”

Prominent Republicans from both sides of the aisle have also expressed concern about further militarising the conflict. At a House Foreign Affairs Committee hearing on Wednesday, Chairman Ed Royce concurred with the sentiment that “the U.S. has no good options in Syria,” and Rep. Karen Bass warned that the Syrian opposition leaders are too weak to be credible in Syria.

“Who are those good rebels we want to arm?” asked Leslie Gelb, president emeritus of the Council on Foreign Relations. “The interventionists seem to take for granted that we know them well. The fact is, the interventionists themselves and the U.S. government don’t know squat about Syria and know even less squat about these rebels.”

The Free Syrian Army, the moniker bestowed on disparate militias and defected military units that have become the primary vehicle of the anti-Assad opposition, still lacks a functional central structure, and many fear that it has grown increasingly beholden to extremist Salafi groups such as Jabhat Al-Nusra.

“The very real risk in the U.S. providing arms even to those we believe to be moderate Sunni rebels is that even if they do better, and Assad’s regime is weakened, who would be the real beneficiary?” writes Gelb. “No one disputes that the extremist jihadis are far better positioned to take advantage of defeating Assad.”

The Central Intelligence Agency, Defence Department, and State Department have been vetting opposition elements in Jordan and Turkey, attempting to identify “friendly” groups and individuals to furnish with U.S. support, but the process has been fraught with unknowns.

Though the presence of U.S. officials in surrounding states has become near-ubiquitous, Washington continues to suffer from a significant deficit of information from inside Syria itself. This not only precludes the ability to identify friendly (or antagonistic) actors that remain within the Syrian borders, but also the knowledge of what happens to U.S. materiel after it crosses into Syria.

Nevertheless, the changing U.S. position is a clear indication of a shift away from President Obama’s expectation that the uprising would topple Bashar Al-Assad without added U.S. support.

“Obama would have preferred not to get involved at all,” said Bennis, “but that’s not an option. Others are eager to get involved, but their rationale is political, not based on strategic interests.”

According to Gelb, “There is one path to sensible strategy and to staying out of trouble. It is for America’s leaders in Congress, the media, and, above all, the administration to learn the lessons of Iraq, Afghanistan, and Vietnam and get themselves to satisfactorily ask and reasonably answer the tough questions before we selflessly, inadvertently, and foolishly find ourselves in another war.”

But as exhortations to further intervention rise, the tenor in Washington appears to be moving decidedly in the other direction.