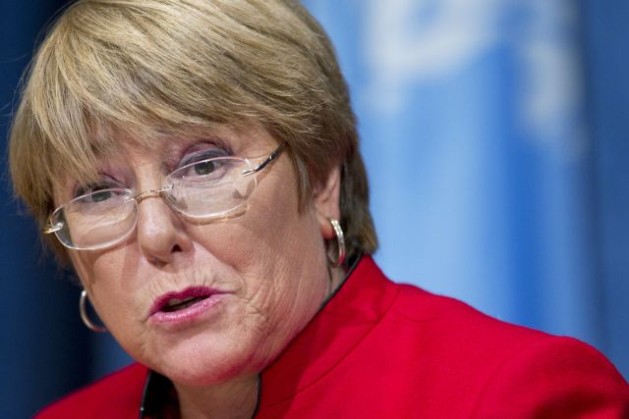 UNITED NATIONS, Mar 17 2013 (IPS) - In her opening speech for the world’s largest conference on ending violence against women and girls, Michelle Bachelet summoned the spirit of 15-year old Malala Yousafzai, who’s skull was shattered on Oct. 9, 2012 by a Taliban bullet.

“It is for Malala – and for every girl and woman, and every human being – that we must come to a strong action-oriented agreement to prevent and end violence against girls and women,” said Bachelet, executive director of U.N. Women.

The Taliban singled out Yousafzai for advocating girls’ education. She miraculously survived the attack, as surgeons fitted her skull with a titanium plate.

The atrocity highlights a fact many diplomats and civil society members have taken to heart: that violence against women and girls undermines international development goals and U.N. values.

The 57th session of the Committee on the Status of Women (CSW57) took place at U.N. headquarters from Mar. 4-15 and addressed this issue. It resulted in an outcome document, adopted with consensus by member states.

On the heels of CSW57 is another series of diplomatic negotiations, for an international Arms Trade Treaty (ATT). The U.N. has allotted 11 days from Mar. 18-28 for delegates to reach an agreement. Here, too, the issue of gender-based violence is on the table.

A sigh of relief, but the fight continues

Civil society organisations and U.N. member states were largely relieved that a document of “Agreed Conclusions” came through this year, after last year’s CSW session failed to produce one.

“We have come to an impasse, which is deeply regrettable,” she said then.

But this year was a different story.

“People expected action, and we have no right to let down the world’s women. And we have not failed them,” she said.

“The room erupted in cheers,” explained Lana Finikin, executive director of the Sistren Theatre Collective and co-chair of the Latin America and Caribbean CSW Planning Committee.

“They opened the door, and the NGOs waiting in the corridors were celebrating, too,” she told IPS.

Gruelling negotiations took place for long hours all week. “On Thursday, people stayed until five in the morning,” said Finikin, who is also a member of the Jamaican government delegation.

The moment, however, was bittersweet. Bachelet announced in the same speech that she was stepping down from her post, to return to Chile.
“It has been an honour and a privilege to be part of this historical moment with all of you,” said Bachelet, as rumours of a presidential run swirled.

When Bachelet finished her announcement, “the room melted”, said Finikin, who attributed much of CSW57’s success to Bachelet’s leadership.

“During long negotiations, Bachelet would walk into conference rooms, and it would liven up,” she explained. “People become more productive when she was there.”

Secretary-General Ban Ki-moon said, “Michelle Bachelet was the right person in the right job at the right time… Her drive and compassion enabled her to mobilise and make a difference for millions of people across the world.”

Mavic Cabrera-Balleza of GNWP told IPS, “The big question now is: who will replace her? I sincerely hope that the voices of women will be heard in the selection process.”

“It was a very difficult process because of the broad range of political interests and agendas that member states represent,” said Mavic Cabrera-Balleza, international coordinator for the Global Network of Women Peacebuilders (GNWP).

This year, “we (successfully) lobbied for language on the link between violence against women and peace and security, women human rights defenders, sexual and reproductive health, small arms and light weapons,” she told IPS.

“(But) the final document was not as strong as we want it to be,“ she said.

“However, in negotiations with member states, you cannot play an ‘all or nothing’ game,” she explained.

Radhika Balakrishnan, executive director of the Center for Women’s Global Leadership (CWGL) at Rutgers University, told IPS, “There were quite a few things we gained in this new document… which we might have lost if negotiations continued.”

“One of the successes was that (member states) weren’t able to invoke (traditional values and morals),” she said, noting that some governments had been trying to use “traditional values” – as well as “state sovereignty” – as a trump card against women’s human rights.

“But many issues that women’s groups have been fighting for, (such as) sexual orientation (and) gender identity, were lost in the document,” she noted.

Daniela Rosche, a policy and advocacy adviser in gender justice for Oxfam, told IPS that CSW57 established new norms, but did not address how to implement them.

“If you really want to do something to fight the surge of violence and take concrete steps to solve it, you need to also develop an ‘international action plan’, basically to operationalise the standards that are there,” she said.

“We couldn’t convince governments to commit to this,” she added.

“What would ensure accountability is (if they) set concrete targets,” she said, citing the annual Millennium Development Goals reports as an example.

“The relationship between small arms trade and violence against women is in the (CSW57) document, and I think that’s very important,” said Balakrishnan of CWGL, who’s 16 Days Campaign highlighted the issue.

Widney Brown, senior director of international law and policy at Amnesty International, explained to IPS that while the CSW57 outcome document is not legally binding, it can be a powerful instrument for activists to pressure their governments.

On the other hand, “the Arms Trade Treaty will be law” if it goes through, said Brown. “But in terms of enforcement– it’s mostly a peer pressure mechanism.”

She noted, “In the Jul. 27, 2012 draft of the Arms Trade Treaty, there’s a reference to gender-based violence and violence against children.”

However, some governments will likely use the issue of gender-based violence as a bargaining chip.

“Anytime you have references to things like gender-based violence in international negotiations, there’s a group of states who are always going to be willing to say, ‘We’ll give you this, on the condition that you take (that) off’,” she explained.

“I think it will be in play again, and we’re going to have to be very vigilant against that,” she added.

Brown explained that Russia, Syria, Iran and Egypt have often impeded member states negotiations for women’s rights and gender equality – and may also act as barriers during ATT negotiations.

At CSW57, for example, the Vatican worked with Syria and some other member states to strip out any reference to gender identity. “This battle has been going on for years now,” she said.

“Fortunately, the NGO community is holding very strongly on why it’s important to talk about gender-based violence,” she stated.

Statement on CSW57 from the SGs office

On Mar.15, the spokesperson for Secretary-General Ban Ki-moon issued a statement welcoming the conclusions of CSW57:

“No matter where she lives, no matter what her culture, no matter what her society, every woman and girl is entitled to live free of fear. She has the universal human right to be free from all forms of violence so as to fulfil her full potential and dreams for the future.”