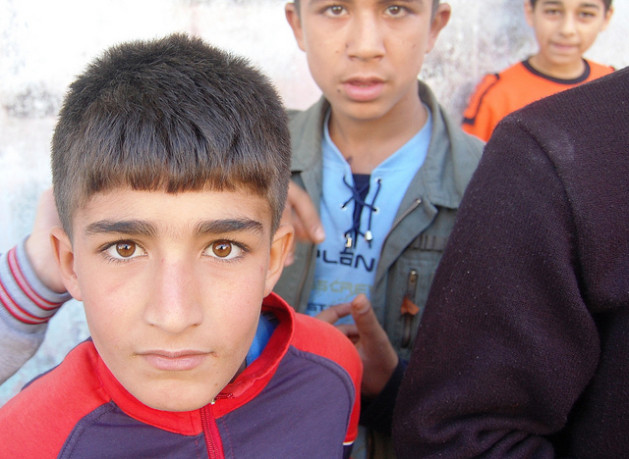 Most migrant children within the European Union are from member countries like Romania and Hungary, as well as from Turkey. Credit: Daan Bauwens/IPS

BRUSSELS, Apr 2 2013 (IPS) - Twenty-two-year-old Dario (not his real name) came to Belgium from Brazil in 2005. Just a teenager at the time, he told IPS he “came to escape the economic, social and political conditions in Brazil and to learn another language”.

“In the beginning it was hard. Not speaking the language prevented me from doing certain jobs and there was also the risk of getting sick because I have no health insurance.”

Luckily, he says, the large Brazilian community in Brussels welcomed him with open arms.

“Of course one also suffers from the financial and moral exploitation of certain people who take advantage, but I don’t complain. Life is a sequence of good and bad experiences; it is part of the risk I took to better my life.”

The promise of a better future remains the principle reason why scores of children – some as young as three years, others as old as seventeen – flock to Europe, even though there is no guarantee that what they find here will be worth the trip.

While it is estimated that there are between 1.6 and 3.8 million irregular migrants in the European Union, there are no reliable figures on the percentage that are children.

Hard data is almost impossible to pin down since these children represent a multifaceted and diverse group, experts say. Most hail from other European countries like Turkey, Hungary and Romania, but a large number also come from Iraq, Pakistan, Afghanistan and Nigeria.

Some enter the EU independently, some come with families, or were born to parents without legal status in a particular country.

Motives for migration also vary, and include family reunification, protection from persecution, or better living conditions, education and economic opportunities. A large number of these children, mostly those from Hungary and Romania, are also victims of trafficking.

Last year the UK police, with the help of Romanian authorities, rolled up a complex trafficking network run from Romania, which was using children to rake in hundreds of thousands of pounds through street crime and benefit fraud.

The operation took place against the backdrop of a steady rise in the number of children arriving unaccompanied in Europe, risking detention. Although some manage to enter state welfare systems, others end up living in hiding.

The financial crisis has intensified the situation, especially in EU border countries like Greece.

“Despite the European Commission’s efforts to promote harmonised regulations, the normative framework in the EU27 for the protection of undocumented migrant children is still quite diverse,” Maria Grazia Giammarinaro, special representative and coordinator for combatting trafficking in human beings at the Organisation for Security and Co-operation in Europe (OSCE), told IPS.

“The implementation of national legislation is even more fragmented. Therefore, unfortunately, a common and effective child protection system does not exist at the EU level.”

Organisations like the Platform for International Cooperation on Undocumented Migrants (PICUM) have raised the alarm about the need to guarantee the basic human rights of Europe’s “invisible” children.

“Undocumented children are in a position of triple vulnerability: as children above all, as migrants and because of their irregular status,” Michelle LeVoy of PICUM told IPS. Many families are simply unaware of their rights to housing, food and education, she said.

Despite numerous explicit and legally binding international and regional instruments that guarantee children access to their civil and social rights, countless barricades stand between rights on paper and rights in practice.

In some countries only “essential” or “urgent” medical care may be free of charge for undocumented children, broadly defined terms that often lead to discretionary and unpredictable application of healthcare legislation.

Barriers around education are equally complex. While the constitutions of several countries grant everyone the right to education, red tape often keeps undocumented children out of the system.

“(P)ractical and concrete barriers, rather than direct legal discrimination, make integration (into the education system) almost impossible,” according to LeVoy. “Throughout the EU undocumented children are often prevented from enrolling in schools simply because they lack identification documents and a permanent address.

“Admission depends on the decision of directors and school administrators, and those decisions are arbitrary,” she said.

OSCE’s Giammarinaro believes that “member states should establish effective procedures based on the best interests of the child, whose actual implementation should be adequately monitored, especially in the case of unaccompanied and separated children”.

A second disturbing trend is the increasing number of reports of unaccompanied foreign minors disappearing from immigration reception centres  and residential care, often without a trace.

A study by the European Union Agency for Fundamental Rights reveals that the disappearance of children from shelters and similar facilities is widespread, and that there is a high risk of these children falling victim to trafficking.

“Children and adolescents on the move are particularly vulnerable to abuse and exploitation,” says Giammarinaro. “They can be exploited in prostitution, forced labour, organised begging and can be compelled to commit crimes. Therefore, the prevention of trafficking and the protection of undocumented children are inextricably linked.”

Experts have identified teenagers between the ages of 13 and  18 years as a major at-risk group for trafficking in Eastern Europe. Even those children aware of the dangers of trafficking say they were nonetheless ready to migrate using insecure channels, according to recent UNICEF research in Moldova.

Idealised perceptions of a better lifestyle coupled with stories of success from people who have been abroad encourage risk-taking among disadvantaged youth, researchers say.

With unemployment hitting record-levels across the EU, stemming the tide of young people in search of a better future seems almost impossible and for many governments the only perceived solution, albeit short-term, is the expatriation of so-called “unwanted immigrants”.

In 2010, the OCSE advised that migrant, undocumented, unaccompanied, separated and trafficked children should not automatically be returned to their country of origin, or resettled or transferred to a third country, stating that migration control concerns cannot override the best interests of a child.