Q&A: Why ‘Rape Victims Must Talk About Their Trauma’

Rousbeh Legatis interviews THÉRÈSE MEMA MAPENZI, who works with rape victims in South Kivu for the Justice and Peace Commission in Bukavu.

UNITED NATIONS, Apr 17 2013 (IPS) - Rape is often perceived as an individual trauma, but in reality its impact extends far beyond a single person and instead affects entire communities, complicating the already challenging task of helping victims of sexual violence.

Thérèse Mema Mapenzi, who works with rape victims in South Kivu of the eastern Democratic Republic of the Congo (DRC), adds that in order for victims of rape and other forms of sexual violence to move on, they must have someone to listen to them. 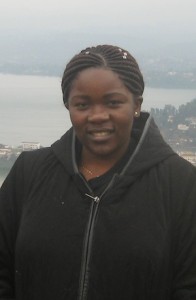 Listening is also important to help devise solutions to deal with rape’s consequences on communities as a whole, explains the social assistant, who works directly with affected populations for the Justice and Peace Commission in Bukavu.

“I give them neither money nor food, but I listen to them and sympathise with them,” says Mapenzi. “What makes me proud is to see that soft words can help to cure the trauma of victims.”

In a conversation with IPS U.N. correspondent Rousbeh Legatis, Mapenzi discusses how rape is used as a tool of war to destroy people, families and communities. Excerpts of the interview follow.

Q: Could you explain the destructive consequences of sexual violence on both individuals and communities?

A: In DRC, rape has been and is used as a weapon of war. Rebels know that in our culture, women are those who protect the culture in their communities. To destabilise the country and help actors of violence reach their goals, they are destroying families and thereby local communities, weakening social cohesion. They raped our sisters, mums, killed our brothers before our very eyes, humiliating and threatening us.

This violence comes with an atmosphere of silence on rape. It is not easy for a survivor of rape to say that he or she has been raped, because in our communities people do not easily speak about sex-related topics, so rape is treated as a taboo.

Many families were and are separated as a result of these experiences; raped women find themselves isolated, the harmony within families broken. Entire communities are weakened and divided, leading to an atmosphere of fear where the rebels become more powerful.

If a victim does not speak, the process of healing the trauma cannot proceed.

Q: Often survivors of rape are re-victimised at a community level. Can you explain how that happens?

Men were often forced to watch their wives being raped and threatened with being killed if they tried to help. Afterwards, it is difficult for men to talk about this experience, because they were supposed to protect the women, so they feel powerless and ashamed.

It also happens that men who were not with their wives when the rapes took place then consider them collaborators with the rebels.

Q: You work with 16 listening centres (trauma centres) in different villages of South Kivu. Why is listening so important?

A: Only by actively listening to people’s problems can one understand them or know what kind of assistance to provide. That is why it is so crucial to listen. By doing so, we contribute to their healing by showing compassion and sympathy. Most of the time, trauma-related secrets that we have to hold back destroy us from within without our even knowing.

For example, many people, especially women, here suffer from stomachaches, tension and headaches because they do not know to whom they can reveal their problems and associated emotions.

Q: Should victims be speaking out as well?

A: Victims must talk about their trauma in order to be healed. In the healing process, one of our goals is to enable traumatised victims to speak out about their situation and where and why they have problems in their daily lives, so they can feel relief. If he or she does not speak, the process of healing the trauma cannot proceed.

Q: What are you concretely doing there to help and support women, children and men?

A: To find survivors of rape, we enter communities to inform people about and make them more sensitive to the physical and psychological consequences of rape. We do that to remind everybody that sexual violence is a community problem.

We also ask them to not stigmatise victims of rape and explain what help our listening centres provide, so they also can tell others about our programmes.

How we then assist them differs from person to person. Sometimes it requires legal assistance, medical care, psychological or economical support. We provide counselling by showing that he or she is not responsible for the rape. If they have never been to a hospital for medical care, we refer them to one.

We also do family mediation, which aims to restore peace within families destroyed by rape. And if the rapist is known or if a child is born from rape – often the most mistreated among victims – we help bring them to justice.

Q: What support does your work need so that you can continue to help others?

A: The first thing I need is security. Sometimes we help a survivor of rape and she reintegrates well. After a while, however, the rebels come back to the village and rape her and others again. This disappoints me so much and makes me feel discouraged.

Another thing is the lack of sufficient financial means. Sometimes we listen to survivors of rape who have gone two days without eating, or to a refugee with children, a pregnant woman or an orphan of three years. Without the financial means to help them, it is difficult to cure their trauma.