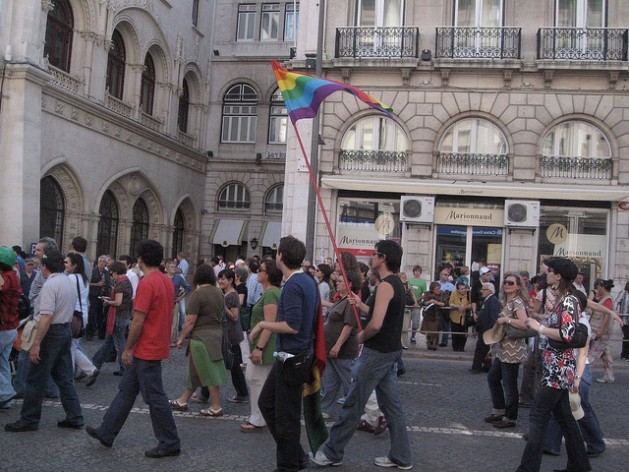 Gay activists march on Apr. 25, the anniversary of the Carnation Revolution in Portugal. Credit: Anette Dujisin/IPS

LISBON, May 31 2013 (IPS) - The heated reaction to the legalisation of same-sex marriage has run counter to the widespread image of France as the cradle of the modern republic and equal rights since the 1789 revolution. In contrast, Portugal with its reputation for prudishness, has shown itself to be much more open and tolerant.

The violent backlash of wide sectors of French society against the Apr. 23 parliamentary approval of the bill allowing same-sex marriage, signed into law May 18, perplexed many observers accustomed to regarding this country as a haven of tolerance.
Clashes between police and protesters, many of them members of traditionalist Catholic organisations who view gay unions as an affront to the sanctity of the family, continued late into the night of Sunday May 26.

However, tempers cooled, and on Wednesday May 29 the first French marriage between two men took place without incident in the southern city of Montpellier, with 500 people celebrating, 140 journalists in attendance, and only five far-right protesters who were easily controlled by around 100 police officers.

Prominent figures who oppose gay marriage include Archbishop of Paris Cardinal André Vingt-Trois, and the bishop of Bayonne, Lescar and Oloron, Marc Aillet.

In contrast, in Portugal, also a Catholic country, when the law on same-sex marriage was approved in 2010, the then Patriarch of Lisbon, Cardinal José da Cruz Policarpo, maintained a respectful silence because of the separation of church and state.

And Portugal went one step further. Following a proposal by the left, supported by several rightwing members of parliament, the Portuguese legislature on May 17 approved a bill allowing “co-adoption” by a same-sex couple of the children (biological or adopted) of one of the partners.

Rui Tavares, Portuguese Member of the European Parliament for the Greens, told IPS the apparent contradiction was because “France is a conservative country, but most foreigners do not believe this because they are only familiar with historic moments like the 1789 revolution, the Liberation (resistance against German occupation 1940-1945) and (the student movement of) May 1968.”

But Tavares said those events “were exceptions to the rule,” and that since 1945, “France has only twice elected leftwing presidents, François Mitterrand (1981-1995) and François Hollande (the incumbent).

“The rest have all been conservatives: Charles de Gaulle, Georges Pompidou, Valéry Giscard d’Estaing, Jacques Chirac, and Nicolas Sarkozy.” Extreme rightwing leader Jean-Marie “Le Pen even got to the second round of voting in the 2002 presidential elections,” he said.

“What a fine example France is, as the first European republic, but paradoxically retaining many aristocratic and monarchical features, a country with structures that are more authoritarian and hierarchical than those of Portugal,” Tavares said.

“Large pockets of reactionary and retrograde Catholicism remain, that hid under cover during the Liberation, reappeared with the Algerian War and are very well organised,” he said.

In Portugal, in contrast, “there is no extreme right, nor organised Salazarist supporters,” he said, referring to António de Oliveira Salazar (1889-1970), the founder and leader of the dictatorship established in 1933 and overthrown in 1974 by the Carnation Revolution, led by leftwing army captains.

“This country has been liberalised, urbanised and modernised a great deal in the last 30 years, and the majority of the population identify with those changes that have improved their lives, and are now much more open and plural,” he said.

In spite of this, “homophobia continues to exist in Portugal, as reflected in language and attitudes, although it is more broad than deep, and many people opt for an attitude of non-interference in other people’s lives, even in aspects that might be regarded as objectionable.

“In general, Portuguese people do not tend to have absolutist views about anything,” Tavares said.

In Portugal, “family ties are strong, and have even become an argument in favour of gay marriage,” he said, describing a personal experience: “My mother, who is 80 years old, telephoned me to say that from now on she is in favour of same-sex marriage, because she heard a gay man say how much his mother would like him to get married.”

In France, “distances are greater, even between close relatives, so opposition to same-sex unions appears to be a rational or values-based issue, and is not undermined so much by experiences of family affection,” the Member of the European Parliament concluded.

For his part, Fernando Fernández, a writer and retired journalist for Agence France-Presse (AFP), said “what is striking about the protests in the country against the law legalising same-sex marriages is that they are an apparent contradiction in a society that has a world reputation for being tolerant, open and liberal.

“It’s true that French society can appear liberal from the perspective of countries that are deeply marked by the Catholic Church, like Spain or Poland,” Fernández told IPS in a telephone interview.

“But in addition to the religious influence, French society is no doubt much more determined by what it regards as its values, and will not accept homosexuals having the same rights and responsibilities” as heterosexuals, he concluded.

Emilia, a 29-year-old Portuguese lesbian, spoke to IPS on condition that her surname be withheld, “because I am one of the lucky few to have a job, in a country where there are many homophobic bosses and unemployment among young people is nearly 50 percent.

“Of course there are fundamental differences between Portugal and France, where a strong police presence is needed at a marriage of a same-sex couple, showing the level of stupidity and primitivism among some French people,” she said.

However, she said the situation in Portugal should not be idealised.

“It’s true that our laws on gay marriage and adoption are among the most advanced in the world, but it’s also true that life is not easy for us, especially when it comes to equal opportunities. We are rejected by people with very conservative morals who hold high office in companies and institutions,” she said.