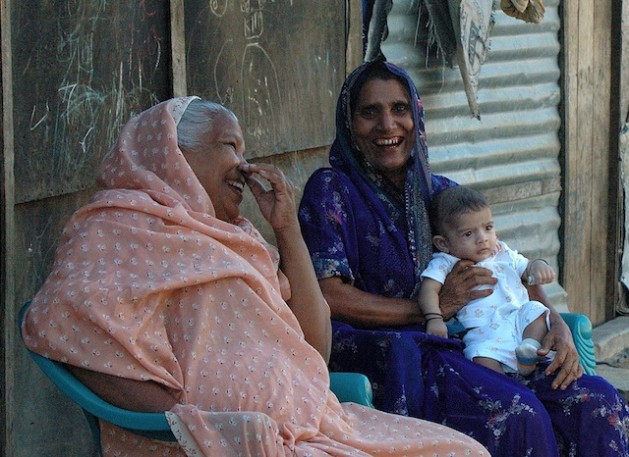 Over two decades after they were forced to flee their homes in northern Sri Lanka, tens of thousands of Muslim IDPs still feel reluctant to return. Credit: Amantha Perera/IPS

PUTTALAM, Sri Lanka, May 8 2013 (IPS) - The camp should not have been difficult to find. We were told to drive straight on the road that leads north away from the town of Puttalam, 140 kilometres from Sri Lanka’s capital Colombo, and we would come upon the settlement of internally displaced people.

What IPS found were not the typical temporary shelters of the war displaced – no tarpaulins stamped with the telltale insignia of donor agencies, no busy aid workers; only a cluster of small villages comprised of white-painted houses on the outskirts of Puttalam’s narrow traffic-clogged, sewer-lined streets.

But on close inspection it became clear that these were, indeed, the homes of the roughly 75,000 Muslims and their descendants who were forced to flee the northern provinces at the height of this country’s civil war in 1990.

IPS spoke with Ahamed Lebbe, a casual labourer in his fifties originally from the village of Pallai in the northern Jaffna Peninsula, who said his life changed forever on Oct. 29, 1990, when the Liberation Tigers of Tamil Eelam (LTTE) – the rebel group that was then fighting the Sri Lankan government for a separate state for the island’s minority Tamil population – ordered all Muslims to evacuate the province within 24 hours.

The message that he would have to leave with nothing more than 300 rupees (about two dollars) in cash came to Lebbe by word of mouth, though there is some evidence the Tigers made a public announcement in Jaffna Town earlier that day.

The public rationale behind the order was that Muslims, along with their fledgling national political party, the Sri Lanka Muslim Congress, represented a threat to the Tigers’ ideal of ethnic hegemony in the North, which formed the basis of their demand for an independent Tamil state.

The command was taken dead seriously and on the night of Oct. 29 the exodus began, with one Muslim family after another leaving behind homes, valuables and businesses, carrying with them only the meagre monies allowed by the LTTE, fear, and memories.

“There were only four Muslim families in the village where we lived,” Lebbe told IPS. “But it was our home – I still speak in the Tamil dialect used in Jaffna.”

Twenty-three years later, Lebbe has still not regained a sense of belonging, even though he has lived half of his life in an exclusively Muslim village in Puttalam.

“There is always this sense that we don’t belong here, that we are not at home,” he said.

The number of IDPs living in these semi-permanent “camps” has now swelled to nearly 250,000, according to some researchers. The majority never left the northwestern coastal belt, where they arrived over two decades ago.

Locals’ initial welcome of the refugees quickly turned to resentment when it became clear that these visitors would not be leaving anytime soon, and would ultimately start clamouring for scarce government resources like jobs, schools and healthcare.

Employers here wasted no time identifying the displaced as a source of cheap labour, quickly hiring them to work in sectors like construction, fishing, and agriculture, and as causal labourers.

Today, the demand for government services in Puttalam is under enourmous stress. With a total population of 700,000 the province is one of the poorest in Sri Lanka. Ten to 11 percent of its residents live below the poverty line, compared to a national poverty rate of about eight percent.

Local authorities are also seriously concerned about the lack of safe water here, exacerbated of late by a long drought.

Mirak Raheem, former researcher with the Centre for Policy Alternatives, a national advocacy body, told IPS the infrastructure in Puttalam is in urgent need of an upgrade. He also stressed the importance of implementing development projects like road construction, which can create jobs for the displaced.

Ever since the government wiped out the LTTE in May 2009, over 400,000 Tamils who were displaced during the 30 years of fighting have been resettled, but nothing of the sort has taken place for the Muslims.

The situation raises the question of whether or not the IDP settlements in Puttalam – built with generous support from international agencies like the World Bank, which funded the construction of over 4,400 housing units – will ever be empty of their current residents.

Mohamed Abdul, a rights advocate who works closely with the community, believes displaced Muslims will not return to the north unless they are presented with a solid plan of action for rebuilding their homes, or offered loans for start-up businesses.

So far, he told IPS, much has been promised but little delivered.

In mid-2010, IDPs wishing to return to their old neighbourhoods were instructed to register with the Sri Lankan authorities. Almost all of the 250,000 Muslims in Puttalam did so, but few ended up making the return journey. It later transpired that most registered only in order to receive the promised six months worth of government rations.

According to Farzana Haniffa an academic at the Colombo University, displaced Muslims were never given priority, even among international organisations, because theirs was not considered an “emergency” humanitarian situation.

“There was never (the threat) that they would starve,” Hanifa, editor of a report on Northern Muslims, told IPS. As a result, only a fraction of the millions of dollars of development aid that have flooded this country since the 1980s has found its way to Puttalam.

For people like Lebbe, the decision on whether or not to return to the north is a simple one.

The formerly war-torn province has little to offer: unemployment rates in the northern Vanni region are feared to be as high as 20 or 30 percent, according to Muttukrishna Sarvananthan, who heads the Jaffna-based Point Pedro Institute of Development, indicating that anyone who wishes to start life there faces, at best, an uncertain future.

“At least here we know for sure what to expect,” Lebbe said.